Jim Skoog, with Dina Chou, brought a bike with fat heavy-treaded tires for winter biking. He sized up the bike rack on the front of the Metro Transit bus and determined the tires wouldn’t fit as intended. (Photos by Margo Ashmore)

As delivery trucks get bigger, and more and more people discover biking as transportation, Minnesota Trucking Association members are taking safety education efforts from the rest areas along highways, into urban school districts and events like one held along Second Street North in Minneapolis Saturday, Oct. 8. Ed Smelser, the association’s communications director, said they do about 10 “Share the Road” events each year. Truck drivers volunteer their time to show bicyclists, motorists, and pedestrians what it’s like from the truck driver’s perspective, where the “blind spots” are.

The photo below shows the blind spot, in which even with several mirrors, a truck driver can’t see a bicycle beside the truck. “And that’s going straight ahead. On a turn, all that goes out the window,” said the driver of the  SuperValu Cub Foods truck.

There was also a parked Metro Transit bus and a school bus available for people to take the driver’s seat. Ray Hallanger, driver with Minneapolis Public Schools, showed the mirrors on the front of his bus.

Shaun Murphy (leaning on the truck below), non-motorized pilot project coordinator for the City of Minneapolis, made the rounds of new bike lanes that opened throughout the city in the first week in October. 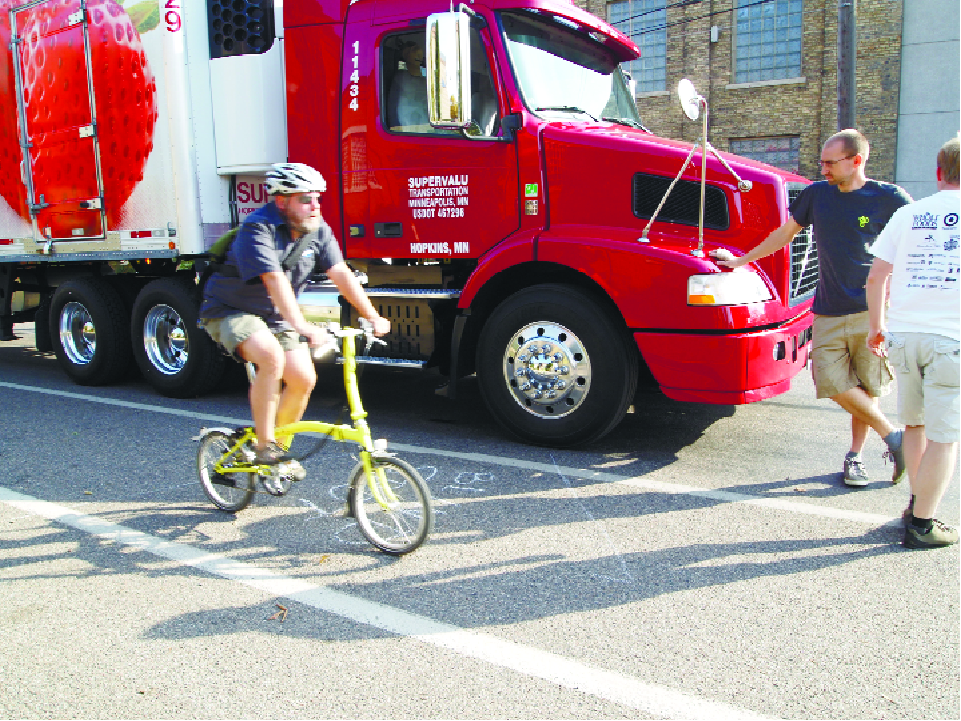 For a video on the new bike lanes by Northeast resident John Akre for MTN, follow this link.