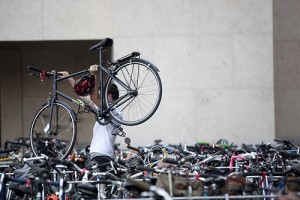 A cyclist navigates parking at a Bike Night event at the Minneapolis Institute of Arts. (Creative Commons)

Kohn’s company, Minneapolis By Bike, offers guided bike tours of the city, including a farmer’s market route and a history themed ride. Her inaugural tours were scheduled over the weekend.

Safe, pleasant-to-ride routes are essential to Kohn’s business, so when she learned that the city’s plans to hire a full-time bicycling coordinator had come under fire last month, Kohn wrote to her city council member to defend the job posting.

“I said I’m an entrepreneur,” says Kohn, “and having a coordinator to make bicycling safer is only going to make businesses like [mine] stronger.”

The controversy stemmed from the city’s decision to advertise the bicycle coordinator job as it was simultaneously debating layoffs for up to 10 firefighters, and was fueled by a critical news article and editorial in the Minneapolis Star Tribune.

The bicycle position, which was created by shifting funding from other vacancies, was on the chopping block at the City Council’s Sept. 2 meeting, but the council ultimately voted 11-2 in favor of preserving it. The coordinator will oversee planning and public safety issues related to bicycles and pedestrians.

A transportation policy expert for Fresh Energy, which also publishes Midwest Energy News, was involved in the planning process for the position.

While the position was spared, the dust-up was a reminder to the city’s fast-growing bicycle community that it still has a ways to go in educating the public about bicycling’s economic significance. In Minneapolis, about 4 percent of workers commute by bicycle, second only to cycling mecca Portland, Oregon, among major cities.

‘An investment, not an expense’

Across the country, cities like Portland are hiring bicycle and pedestrian coordinators to help attract not only federal project dollars but also to make their cities a more attractive place for workers who want the option of living without a car, says Joan Pasiuk, director of Bike Walk Twin Cities, which promotes non-motorized transportation.

Chicago has had a bicycle coordinator for a decade and a half. Omaha hired its first bike coordinator last year. Even cities like Miami and Phoenix that probably don’t come to mind as major bicycling hubs have hired for similar positions in recent years.

“Cities are seeing this as an investment, not an expense,” says Pasiuk.

The economic payback comes in several forms, she says. Coordinators can help cities stay on top of federal funding opportunities, and offer ideas and strategies for new projects before they are built so that money doesn’t have to be spent later to accommodate bikes and pedestrians.

The impact of bicycling goes broader, too. If cities successfully boost bike ridership, residents will spend less money on gas and car maintenance and have more to spend at local businesses, Pasiuk explains. And making it easier for residents to make short trips by bike rather than by car can ultimately reduce infrastructure and public safety costs borne by taxpayers.

And then there’s the health savings. Researchers in the Netherlands found that despite being at higher risk for injury, cyclists enjoy “substantially larger” health benefits compared to drivers. The Journal of Physical Activity and Health published a research paper earlier this year that estimated Portland’s planned bicycle investments will pay for themselves by 2015 in reduced health care costs alone. By 2030, the city’s residents will have saved $800 million. 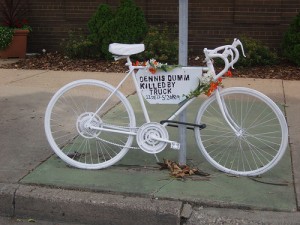 Left: A “ghost bike” memorial to Dennis Dumm, a 31-year-old bike commuter who was killed in 2009 by a truck while riding in a bike lane near downtown Minneapolis. (photo by babyonborg via Creative Commons)

As bicycles have re-emerged as an important mode of transportation in Minneapolis and other cities, they still face the popular misperception that they’re “toys,” says Gene Oberpriller, owner of One on One Bicycle Studio in downtown Minneapolis. He supports the city coordinator position, but thinks the city should have sold it better by emphasizing that it is a traffic and public safety job, not about recreation.

As for bicycling’s economic importance, Oberpriller points to the growth bike shops have seen in the past couple of years. He knows of a dozen new bike shops that have opened in the Twin Cities during the last two years, and each of them employs between two and 20 people. Oberpriller’s own shop employs 10 people (five full-time, five part-time), up from three when he opened in 2001.

Minnesota Business magazine last year estimated that bicycling is a $315 million annual business in the state. That includes small retail and service shops such as One on One, as well as a handful of bicycle product manufacturers and distributors such as Park Tool, Quality Bicycle Products, and Dero Bike Racks.

“Another thing — these are livable wage jobs,” says Rolf Scholtz, president at Dero Bike Racks, which makes distinctive, stylized bike racks that are sold around the world. The company employs 21 people at its Minneapolis facility. All of them receive benefits and many of them earn over $50,000 a year, says Scholtz. “And it’s also growing by leaps and bounds — the whole bike transportation industry.” 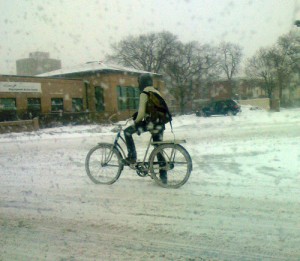 Right: Despite the region’s notoriously harsh winters, year-round cycling is becoming more popular in the Twin Cities. (photo by The Junk via Creative Commons)

The economic impact of bicycling is becoming less seasonal, too. Bike shop sales typically peak in early summer, around May or June, and then fall off throughout the remainder of the year. This year, Twin Cities shops are seeing a different pattern, says Oberpriller. He and other owners are seeing a plateau instead of a drop off, with sales staying strong late into the summer season. “We’re thinking it’s going to go later this year than ever before,” he said.

More impressive is what’s happened the past couple of winters.

Oberpriller has seen his winter business increase by about 30 percent, much of it from dedicated winter bikes, cold-weather clothing, and service during the slushy, subzero months. Last year, for the first time ever, the bike shop had a customer every single day throughout the winter, which was a particularly long, cold and snowy one.

“There’s no way I could have done this [as a bike-only shop] 20 years ago,” says Oberpriller. “I would have had to sell skis or snowboards or ice skates” in the winter.

A positive feedback loop is emerging, in which people see people riding bikes in the winter and decide to try it themselves, which leads to more bicyclists being seen and even more people trying it out, Oberpriller describes.

It’s not unlike what’s happened in Minneapolis’ warmer months over the last several years. Accidents have been on the rise, too, though, and if the bicycling community and economy are to continue growing, it needs to be seen as a safe transportation choice. Now that bicycles are traffic, Oberpriller says there’s a need for more infrastructure, education and enforcement — roles a coordinator could help address.

“You’ve got a real growing bicycle transportation and mode share in our city,” says Scholtz. “Why not feed that? Why not support that?”