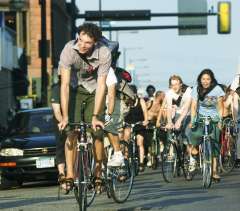 Beginning in Loring Park and weaving through the city, more than a hundred bikers took over the streets of Minneapolis July 28 in an event known as Critical Mass.

From Dinkytown to Uptown to downtown and back again, the group battled near-100-degree heat to complete the two-hour ride.

Critical Mass rides occur worldwide, with the first in 1992 in San Francisco. The consensus among the Loring Park crowd put the origin of the Minneapolis rides at 1997.

The variety of reasons for participating in the event were as diverse as the crowd.

University alumnus Joe Marczak said riding in such a large group creates a sense of power for bikers and makes them more visible to motorists.

“People need to become more aware of our presence,” he said. “We’re not here to protest or to cause trouble, just to get people to think.”

Marczak said he enjoys the unorganized nature of the gathering, with no leaders or membership involved.

“Whoever takes the lead, the rest follow, and we alternate throughout the ride,” he said.

Marczak joined dozens of other bikers in Loring Park who passed the time jumping in the fountain and tossing around Frisbees.

Through the mist of the fountain, University alumnus Joe Turgeon said the event promotes environmentally friendly transportation and shows an alternative to gasoline when prices are so high.

Brian Dooley, a University alumnus, returned to the event this month after being arrested and charged with three misdemeanors during the June ride: disorderly conduct, disrupting traffic and fleeing an officer. Two others were arrested along with him, he said.

“I think it is just a waste of police time and resources to harass bikers when there are many other important things to worry about,” Dooley said. “I’m coming back today to help show the strength in numbers of the ride. If I didn’t, then I would just be giving them what they wanted.”

Second Ward City Council member Cam Gordon, who participated in the ride, took time to discuss with Dooley the events surrounding his arrest.

“The city has shown support for Critical Mass for a long time, with various members of city government taking part in the ride,” Gordon said. “I respect what they do, and it gets people to open their eyes when such a large group rides together.”

City Council members are concerned about how to treat bikers within the city, he said.

“Being at the bottom of the transit pole, they are sometimes overlooked,” Gordon said. “Critical Mass takes a stand and shows people that they have the right to bike and the road must be shared.”

Greg Reinhardt, spokesman for the Minneapolis Police Department, said no arrests or violations were noted in Friday’s ride.

Nick Katt, a physics senior who has ridden with Critical Mass since 2000, said that although the ride began as a way to bring attention to bike transportation, in recent years it has become something different to everyone who rides.

“Everyone has their own agenda or reason for participating, but I think a lot of people just do it for the fun of the ride,” he said.

Matt Erickson, an architecture senior, said some of the highlights of the ride included a man downtown who jumped out of his Suburban and began screaming in the faces of bikers and then a woman in Uptown who slammed on her brakes and yelled profanities at the bikers.

The bikers proceeded to bike in circles at the intersection of Lyndale Avenue and Lake Street, he said.

“After she began yelling, we began a merry-go-round in the intersection, and that just enraged her even more,” Erickson said with a laugh.

The ride concluded about 7:30 p.m. as some bikers returned to Loring Park, while others cooled off in Lake Calhoun.

The Critical Mass rides are the last Friday of every month at Loring Park with bikers gathering about 5 p.m. and departing at 5:30 p.m.