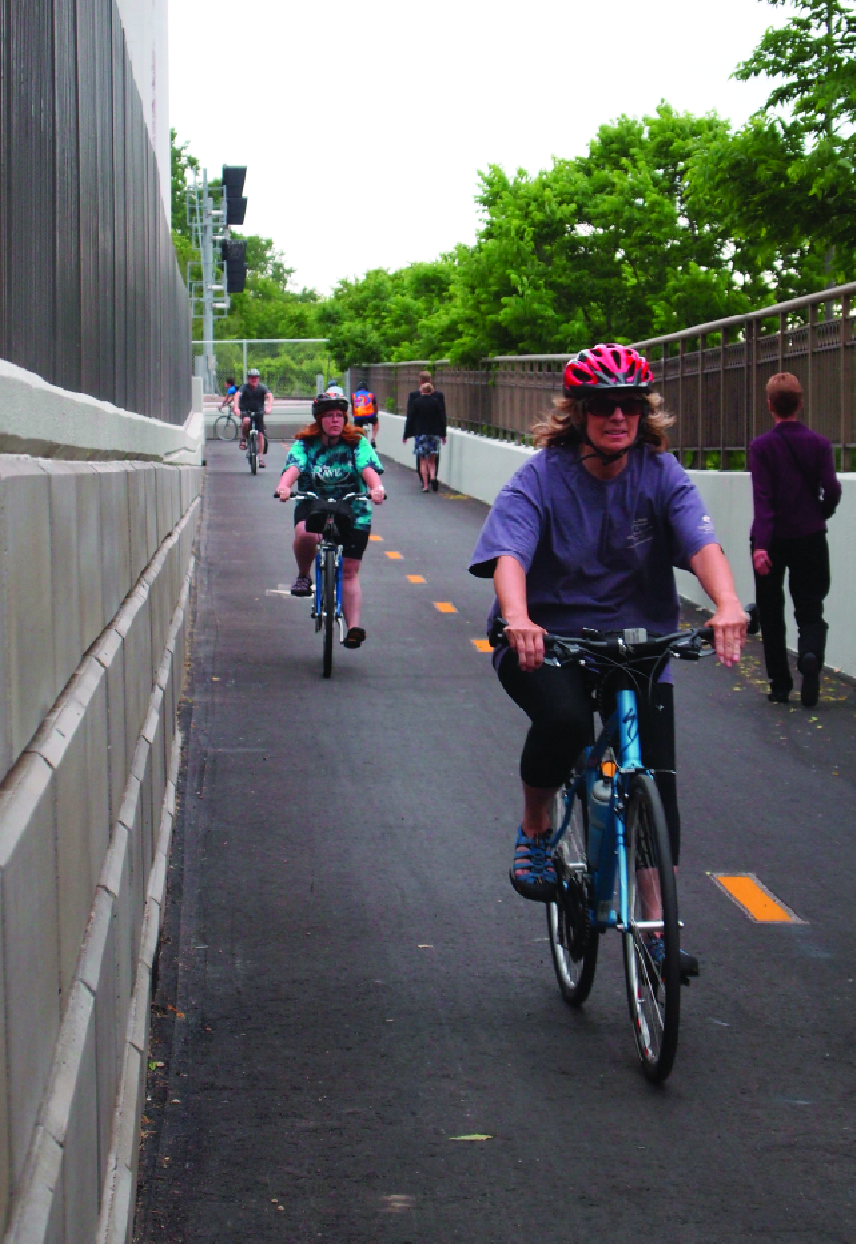 The Cedar Lake Park Association (CLPA) has been working on it since before Target Field was even a glimmer, and the field was built around it, county commissioners say. The last piece, an easement to build on Federal Reserve property, fell into place recently and the Cedar Lake Regional Trail opened with a ribbon cutting Tuesday, June 14 just before the evening’s rain came.

Hennepin County Commissioner Mark Stenglein, who said he rides his bike to work downtown two to three times a week, noted that fellow Commissioner Peter McLaughlin “knows just when to show up,” on his bike, with the North Star commuter train whizzing past in the background.

David Klopp of CLPA (yellow T-shirt, holding scissors in photo) said that when the project started, fax machines had just been invented. He invested $70 in fax charges at a local store, getting the word out about the project to media, thinking “this better work!” When a reporter came out to interview him, he asked her out, and they eventually married.

Seventh Ward Minneapolis City Council Member Lisa Goodman, whose ward contains much of the trail’s geography, credited CLPA, city public works staff, and many others, including an individual at the Federal Reserve who helped his cohorts see the benefits of biking.

Minneapolis Mayor R.T. Rybak said the trail indicates that “the car is not going to be the dominant way of getting around.”

A city news release said, “With the first section opening in 1995, the Cedar Lake Trail is considered America’s first bike freeway because it’s the first one built with two paved lanes for bicycle traffic and one for pedestrians… Bicyclists can now pedal in from the suburbs, through downtown Minneapolis and beyond without ever joining street traffic.

“The connections to the Cedar Lake Trail now include:

For an overview map of the new trail and others in the Minneapolis area, go to http://www.ci.minneapolis.mn.us/bicycles/

Within Northeast, the 18th Avenue Northeast Bikeway is still awaiting its pedestrian crossing signal system. The description on the city’s website reads: “This approximately 1.3 mile long bikeway/walkway is located along 18th Avenue NE from Marshall Street NE to Monroe Street NE. This arterial trail connects to numerous planned and funded bikeway/walkways throughout the corridor. This project consists of on-street and off-street bikeway and the scope of work include lighting, ped crossing signal system, retaining wall, curb extension and speed table.” See: http://www.ci.minneapolis.mn.us/public-works/cip/18bikeway/

Workers are finishing concrete work relating to the Fifth Street NE and SE bicycle boulevard and on-street bicycle lanes at the junction of Fifth and Broadway streets NE. Vehicle traffic will still be blocked at that spot, but bicycles will be able to pass, and pedestrians will have ramps at the widened traffic diverter.

A full description of the anticipated changes is at http://www.ci.minneapolis.mn.us/bicycles/5thStBikeBlvd.asp