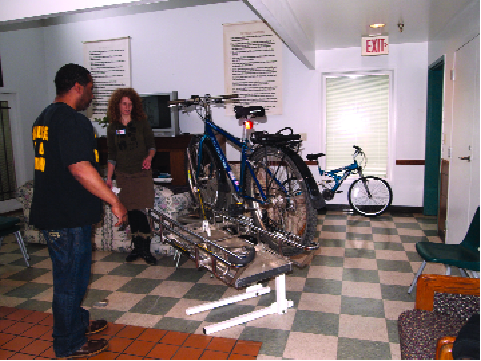 Claire Stoscheck and Marianne Baum of the Community Partners Bike Library of Cycles for Change (formerly Sibley Bike Depot), a non-profit community bike store in Saint Paul, conducted an orientation for a group of North Minneapolis residents in Network for Better Futures. The loaned bicycles, available for up to six months, “will help these participants save money on transportation costs, get exercise, and access resources and jobs not easily available by public transit,” Stoscheck said.

Before releasing the bikes, they went through an orientation on safety-checking, locking up, and transporting bikes on Metro Transit. Let’s listen in:

What is ABC Quick Check? A pre-ride safety check, said Baum (giving demos in the photos at right). Air, Brakes, Chain…C also stands for Cassette (the stack of gears. “Quick” refers to the release on some bikes that allows the rider to take it apart for storage – make sure the bike is reassembled correctly and the release in the proper position to hold the bike together. “Check” refers to riding the bike around a parking lot or other safe area to make sure things function before taking off.

Make sure there’s enough air in the tires and know where/how you can get air – gas stations, Venture North, or your own hand pump. Squeeze the handlebar brakes and see that they operate the pads that clamp the tires, and snap back when released. The chain should be free of dirt.

To best lock a bike against theft requires two locks, first the U lock which goes around the pole or bike rack and the back wheel  in the “V”, including part of the bike frame if it will fit. The other lock, a thick cable, threads through the front wheel  as well. Then, “try to steal your own bike” – yank on the bike and make sure the locks hold.

To operate the Metro Transit bike rack, pull the rack down (the ad on the front of the bus is on what becomes the bottom of the rack). There will be room for two bikes. Put the bike in the rack closest to the bus with the handlebars facing right, and lift the rear wheel locking arm into place (left).  If there are two bikes, the second will go in the other slot facing the other direction.

Simple stuff perhaps, but it impressed this potential rider who’s still on the fence. 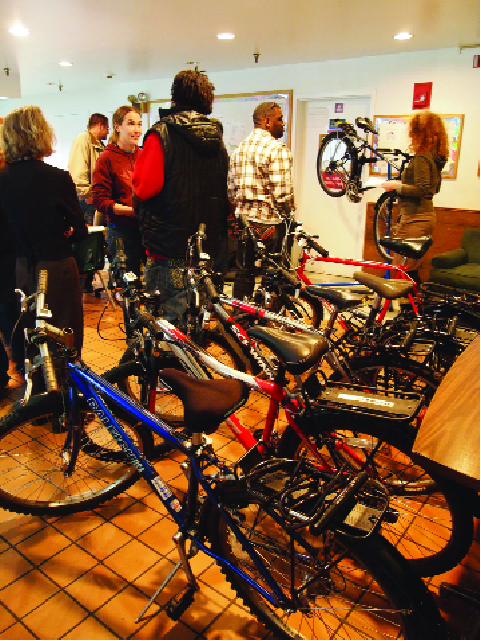