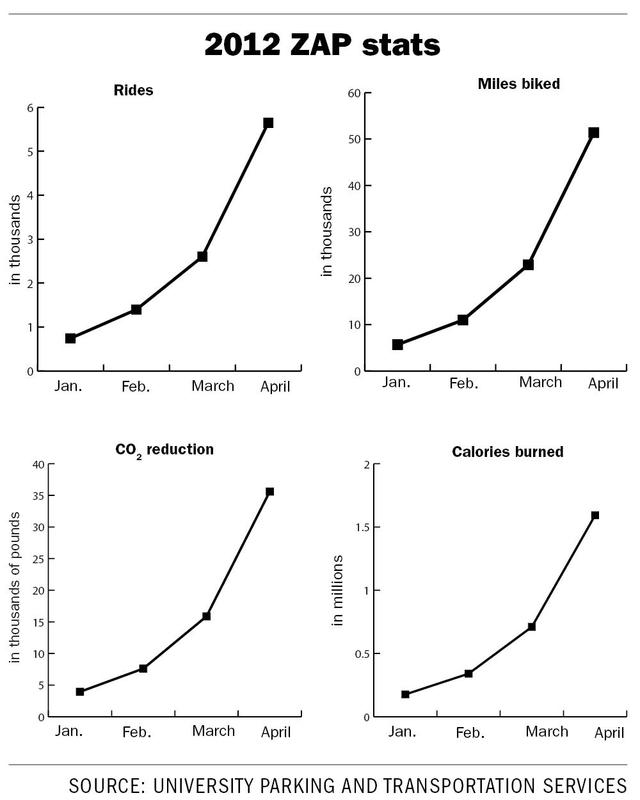 Bicyclists across the Twin Cities will soon be rewarded for their rides.

When the ZAP program launches this month, bikes can get tagged for free with a chip read by cellular towers, registering a ride under the biker’s ID number. The program launched at the University of Minnesota in January after more than a year of testing and has since expanded to more than 1,125 bikes. Now it’s expanding to the Twin Cities, in August with the aid of Commuter Connection in Minneapolis and Smart Trips in St. Paul.

The University’s program gears rewards specifically to staff and students. University employees who ride at least 40 times by August 31 earn 50 points in their Wellness Points Bank, which translates to a reduction in their health insurance premium.

Employees who ride at least eight times a month are entered into a drawing for additional rewards.

Students who meet the monthly goal automatically receive a reward, like bike-related gear or gift cards to local businesses like Loring Pasta Bar.

“We want to keep the students engaged and the focus of the program — the incentives — will be on them,” said Steve Sanders, alternative transportation manager at the University’s Parking and Transportation Services.

The University campus has 20 towers, and bikers can pass any tower in the Twin Cities network to log a ride.

The program was originally slated to begin in both cities in June, but was delayed due to paperwork processing and other delays. The Minneapolis program has now entered beta testing. Smart Trips in St. Paul is hoping to launch as soon as the towers are installed.

“We just under-anticipated the time it would take to get some of the permits issued, as well as actually formulate the program itself,” said Andrew Rankin, a spokesman for Commuter Connection.

Eight of nine downtown towers are currently installed; the ninth ­— at West River Parkway and Cedar Lake Trail — is still waiting on a permit.

Smart Trips in St. Paul ran into similar delays with permits and hopes to install the towers in the next few weeks.

“The goal of the program is to really develop a whole regional system between the two cities,” Rankin said.

The Minneapolis program will have fewer rewards than the University at first.

After their first 10 rides recorded, bikers receive an automatic prize — this year it will be an LED headlight. Following that, if bicyclists ride eight times in a month, they’re entered for that month’s prize drawing. For August and September, the prize drawing will be for automatic bicycle brake lights.

“What we hope is after you try it those first 10 times is that you can start making a habit of it,” Rankin said.

“People who can do it eight times a month — it’s a lot easier for them to get in the habit of pulling their bicycle out of their garage and using it to commute to work.”