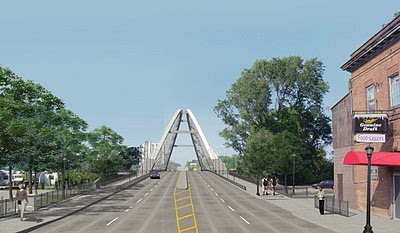 One of the bright spots (of which there are many) on the redesigned Lowry Avenue is the ample space provided for bike lanes.  Last week some cyclists and I had a very wonkish discussion about how those lanes would be incorporated into the shiny new Lowry Bridge.  If you’ll notice from the design specs above, there don’t seem to be any marked bike lanes.  If the bridge is built exactly like this, I see three possible prospects, all of them unappealing in their own right:  bicyclists will have to share the road with high-speed traffic, bikers will share the walkways with pedestrian traffic, or bikers will be required to get off of their bikes and walk with pedestrians if they’re not willing to brave traffic conditions.

In an email exchange with some cycling activists and staff from County Commissioner Mark Stenglein’s office, it’s unclear how bicycling will be supported on the bridge.  A biker claims there will be no marked lanes while a staffer says there will be two 11-foot lanes of traffic and two 4-foot marked bike lanes in each direction.  For the record, the Minneapolis Bicycle Master Plan, passed in 2001, calls for the entirety of Lowry Avenue to have bike lanes.  Readers of both this blog and the Irving Inquisition will know how much I want to see the Lowry Bridge adhere to master plans.

With the formal public comment period over and done, and construction underway, changing the actual width of the bridge is out of the question.  But if the lane configuration needs to be tweaked, perhaps that can be done.  For instance, I’m told that…

…the average daily traffic on the Lowry Bridge in 2007 was 13,800 eastbound and 15,800 westbound.  What?  Did two thousand people a day come to north Minneapolis and never return?  If so, how come our census numbers for the senate district went down by 9,000?  More likely, I suppose, is that they drove over the slippery metal grate that passed for a roadway, said “Oh, HELL no,” and went back home using a different route.  At any rate, the daily traffic on Lowry before was pretty easily handled by two lanes of traffic, with turning lanes at each end.  The density certainly isn’t there right now for a need to go to four lanes, so maybe we ought to keep the same lane configuration for the time being and have more widely marked bike lanes.

After all, the MnDOT Bikeway Facility Design Manual suggests 6-foot bike lanes on urban roads with speed limits and traffic loads similar to Lowry.  Strict adherence to that guideline would probably crimp traffic too much on the bridge, but cutting down lane widths slightly to add 5-foot lanes would make the bridge more bike-friendly.  The County may resist cutting lanes down to 10.5 feet.  But a study by the National Cooperative Highway Research Program showed no significant difference in crash rates for urban arterial roads such as Lowry when lane widths were 10, 11, or 12 feet.

I expect that at the very least, we’ll see marked bike lanes along the bridge, as well as clearly marked instructions for cyclists approaching the bridge.  But Minneapolis shouldn’t expect to keep its title as the #1 biking city in America by doing the bare minimum for our cyclists.  We’ve only got one shot at building this bridge, so let’s not hold back on what it can provide for our city.