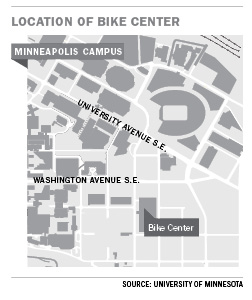 Steve Sanders has his fingers crossed for the University of Minnesota’s Bike Center to finally open its doors Sept. 12.

“There’s still a lot of work to do, but things are looking up,” said Sanders, bike coordinator for Parking and Transportation Services and the center’s director. “It’s definitely getting there.”

Once opened, the center will be a go-to facility for campus bicyclists. It will provide electronic trip-planning, 24-hour bike storage, repair services, a small retail outlet and showering and changing facilities for sweaty commuters. The center will also serve as a collection point for abandoned bicycles and as a classroom to educate riders on urban biking.

Located in the Oak Street Parking Ramp, the 18,000-square-foot center has faced several setbacks since it received $524,000 from the nonprofit organization Transit for Livable Communities in March 2009.

The center was originally planned for completion in August 2010 but the Board of Regents didn’t give its stamp of approval until that September.

Following the regents’ approval, the center faced another setback when bids from contractors came in too high. After scaling down some of the center’s cosmetic features, an opening was planned for this year’s Welcome Week but was delayed again due to construction issues, Sanders said.

Now, the center is set to open for the second week of classes Sept. 12, with a grand opening ceremony planned for the last week of September.

The Hub Bike Co-Op, which has two locations in Minneapolis, will operate the University’s bike center.

While the center will charge a yearly membership fee of $85 for access to the bike storage and shower facilities, Sanders said that membership isn’t necessary to use the center’s other resources.
“The intention of the center is to serve as a focal point for the University’s biking community,” Sanders said. “If people have questions about biking, equipment, choosing a route, safety … this is going to provide a place where they can go get answers.”

The center will also offer a 10 percent discount to members of the University community who provide a University ID.

Mitchell Rogalsky, a freshman biomedicine major and self-described avid bicyclist, said that though he hasn’t heard much about the center, he thinks it will be convenient and useful for students — especially with all of the construction on campus.

“Around campus, there are a lot places where you have to walk your bike,” he said. “It will be nice to plan out ways to get around faster and avoid those areas.”

Rogalsky added that he believes the center will catch on with students since so many people choose to bike around the University.

According to Sanders, the University has the highest concentration of bicycles in the state. Approximately 6,500 bikes cross the Washington Avenue Bridge every day and 4,000 bikers enter campus via 15th Avenue daily, Sanders said.

That makes the corridor between 15th and University Avenues the most heavily trafficked in the state for bicycles, Sanders said.

With so many bicyclists and several major construction projects going on around campus, state Rep. Phyllis Kahn, who represents the University area, is hopeful that the center will help reduce campus congestion by encouraging more people to bike rather than drive.

“It certainly is easier to have more bicyclists than cars,” Kahn said. “It’s going to be good to have a center where people know they can get things fixed and their questions answered.”