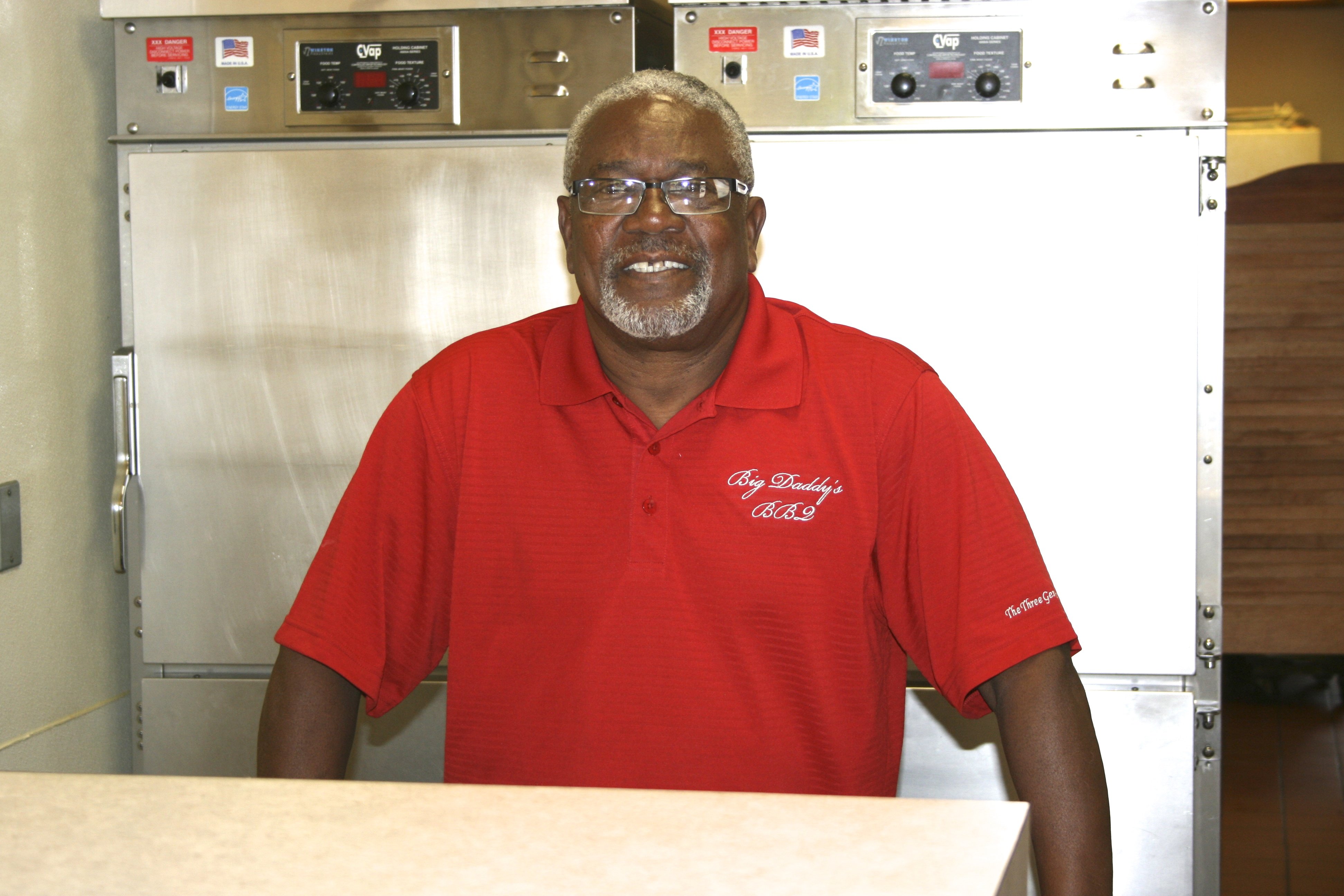 Historically, the Rondo neighborhood was the most vibrant African American community in St. Paul, until a new freeway, built in the 1960s, tore it apart. According to the Minnesota Historical Society, “The construction of I-94 shattered this tight-knit community, displaced thousands of African Americans into a racially segregated city and a discriminatory housing market, and erased a now-legendary neighborhood.”

Ron Whyte, one of three owners of Big Daddy’s Old Fashioned Barbeque (625 University West, St. Paul), has observed a shrinking African American presence since his arrival in St. Paul in 1980. He says, “…there were a few other black businesses on University when I got here, and I’ve seen that diminish, which is kind of bad, but it has diminished.” 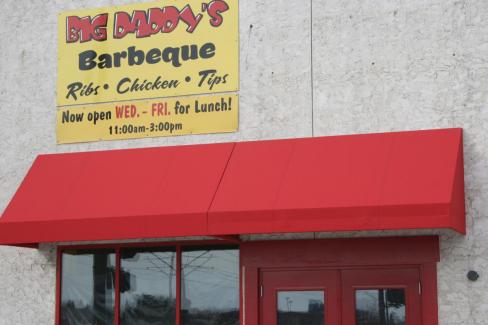 The declining number of black businesses, Whyte says, has resulted in far less variety than he would like to see up and down the Corridor. “I look down there and I would just like to see a better mix of things.” He is pleased with the Daily Diner, which opened in 2013. “But before that, you look for fish, barbecue, chicken wings, there’s just fast food.”

Over the years, in various forms, Big Daddy’s owners have provided both some of the balance, and that link to University Avenue’s history, which Whyte would like to see more of.

From backyard hobby to business

Like many of his Central Corridor neighbors, Whyte migrated from somewhere else. He was born and grew up in Hopkinsville, Kentucky, where his mother was a homemaker and his father a cement layer.

Whyte followed the same path as a lifelong friend, Gene Sampson, who relocated to the Twin Cities to take a job at Honeywell. Whyte moved five years later and also worked at Honeywell.

A third partner, Bob Edmond, is a Georgia native. Edmond’s brother and Sampson were good friends in college. Edmond relocated to Minnesota for a position at Control Data. The three have now been barbecuing for close to 30 years. 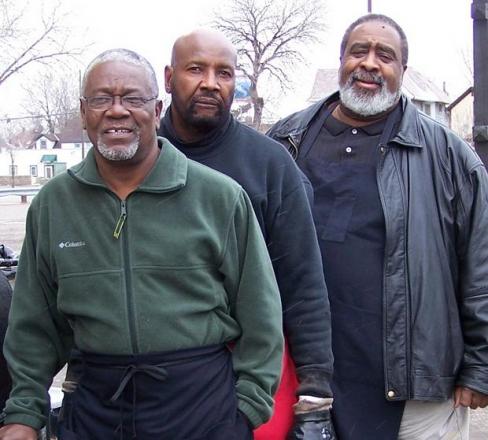 Backyard barbecuing became a serious pastime when Sampson, Edmond, and Whyte converged in St. Paul. Whyte recalls: “We started cooking in Gene’s backyard…just, ‘mine tastes better than yours.’ And from there, friends and relatives kind of said, ‘Well, you know, you guys are pretty good.” This spurred the friends to pool their ideas, agree on the best way to do things, and start selling barbecue, first at festivals and in parking lots.

For the next 20 years the men did the circuit—Rondo Days in St. Paul was their first festival. “We started doing that, and we became pretty popular….and then we branched out to Woodbury Days, St. Paul’s Grand Old Day, Stillwater Days….” Eventually they progressed to “bigger and better things, like the rib fest they used to have over in Minneapolis,” as well as Taste of Minnesota.

In the 1990s they started showing up at outdoor lots, including next to Tiger Jack’s shack on Dale Street near I-94, Payne Avenue, and outside a Cub Foods grocery. “We were approached by the manager of Cub Foods Market, up there in the Midway area,” says Whyte. “He just thought it would be a good advertisement for him if we barbecued right there on his lot.”

Sampson took a big leap in the late 1990s. After deciding that he wanted to venture out on his own, he opened a restaurant (Big Daddy’s) in Union Depot downtown St. Paul. While Big Daddy’s got good reviews, parking was an issue. “You know when you’re paying to park and then paying to eat it gets pretty tough.” As a result, the restaurant closed after two years.

Ending up where they started

The partners returned to their roots and resumed barbecuing outdoors in parking lots. One of those lots was at Johnny Baby’s Bar on University Avenue. Then, in 2008, after a lease dispute ended that arrangement, the Neighborhood Development Center (NDC) entered the scene and helped the trio find a space.

“They (NDC) have always been in support of us,” says Whyte. “They’ve just been super helpful, anything that you would like to know, you can just go to them. It’s kind of like somebody being on your board of directors that’s steering you.”

Sampson took an entrepreneurship course from NDC in the 1990s.

The space NDC suggested, at 609 University Avenue, just east of Dale Street, had housed Lendways Bar from the 1930s until 2003. Whyte says, “I wasn’t around but it used to be, from what I’m understanding, a very, very popular bar. The city officials used to come up because they’d dine there, too.” NDC owned the property and had plans to tear it down, replacing it with a new complex, so this was to be a temporary home. 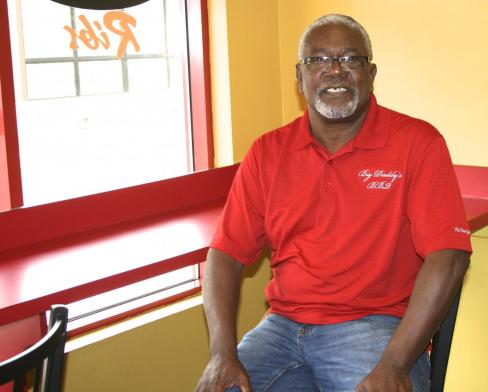 Big Daddy’s proved “very, very successful” at its first bricks and mortar site. When it was forced to move, the partners looked at a variety of locations, but, says Whyte, “we ended up right back almost where we started.“ In 2010 Big Daddy’s opened its doors at its current location, formerly occupied by West Indies Soul Cafe, in a building also owned by NDC, just a few steps west of Dale Street. Partner Gene Sampson has since left, returning home to tend to his mother.

Light rail construction is the biggest challenge the business has faced, says Whyte. “It hurt us pretty bad last year….Nothing has hurt as much as that.” He offers an example. “One day we’re sitting here. When they pour a sidewalk, they don’t tell you, they just put a big plastic thing up and cover your doors and start pouring. So you’re kind of, ‘wow,’ and customers are coming and they can’t get in….”

With major loss of parking space, plus all of the other disruptions caused by construction, Big Daddy’s owners turned to staff of NDC’s U7 Project for assistance once again. Navigating the challenges led to growing the catering side of the business, not something the partners had offered at their former location. Catering now stands at 15 to 20-percent of their business, depending on the season.

With construction complete and the trains set to begin running, Whyte is unsure how sales will be affected. “As far as what’s coming, it’s a guess…. I really don’t know. I have some customers that say we’re going to do great, and I have other customers that say, ‘I’m going to take the light rail to come see you’….”

Big Daddy’s will be prepared for a larger volume of customers. With NDC’s assistance, the partners leased the corner space next door. On March 21, 2014, it became the primary retail space. The expansion means a seating capacity of 20 to 30, as compared to eight, plus an additional 12 to 20 seats on the patio during warmer weather.

Whyte says that Big Daddy’s hopes to do some grilling outside during summer months. 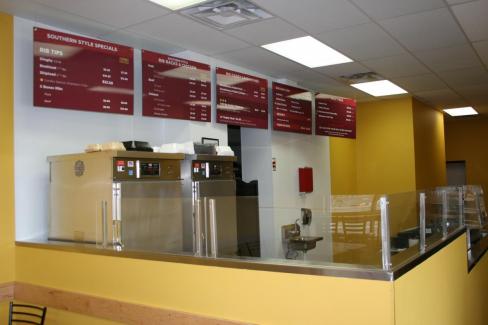 While construction has presented a host of challenges and lingering uncertainty, Whyte says he does like seeing the street being “cleaned up.”

“It really was kind of a bad area,” he says, “prostitutes, drugs, what have you.” Among the changes he’s happiest about are the Rondo Community Outreach Library on the site of the Faust Theater, a longtime neighborhood theater that became an adult entertainment complex from 1970 to 1983, and Frogtown Square, a mixed-use development with senior housing and retail that opened in 2011.

Now Whyte would like to see more variety and a larger African American presence once again. The number of Asian restaurants can be overwhelming, he observes. “I hope this doesn’t come out wrong, but if I was new to this area, I wouldn’t know where to start.”

Whyte says that Big Daddy’s prides itself on serving the best barbecue–Kansas City style as opposed to Texas bbq–in the Twin Cities.

To be honest with you, it’s in no way being cocky…but there’s really no competition as far as barbecue is concerned.

As you know, the man in St. Paul, and probably a lot of other places, is Famous Dave’s. And it’s just that we have a better tasting product than he does.

Still, it’s more than the food, Whyte contends. “We’re a family-oriented restaurant, very friendly in contact with the customer. Those kinds of things help us.”