As its window signs suggest in more than 50 different languages, Biermaier’s Books will be closing Monday with its biggest discount yet – a buck a book.

Known for its creaky floorboards and books stacked to the ceiling, the used bookstore has been a staple in the Marcy Holmes neighborhood. Yet after 41 years, Bill Biermaier said it’s time to retire.

The bookstore will be the third to close near campus in the past few years, with Dinkytown’s most recent closure of Cummings Books in December.

Marcy Holmes Neighborhood Association Director Melissa Bean said at one time the area’s bookstores were a tourist attraction for booklovers who went from “one to one to one.”

Now Dinkytown’s Book House is the only used bookstore in the area.

“It’s terrible when we lose any individual’s small business in the neighborhood,” Bean said of Biermaier, who lives in the area. “It’s nice to have a neighbor who owns a business.”

In January, when Biermaier announced the closing, he estimated he had a stock of 75,000 to 100,000 books. After his going-out-of-business sales since January, he believes he’s down to 50,000 books.

Biermaier said he’s noticed that students don’t seem to be reading, or at least buying, books anymore with the popularity of the Internet. Originally he said students made up half of his clientele, but now the proportion has slipped to less than 20 percent.

“It wasn’t as enjoyable [to run the store] with less people to visit with,” he said. “I’ve enjoyed getting to know people. Hearing what their grand plans are for the future.”

Despite the drop in traffic, Biermaier said he continued to buy books and paperback fiction for the students in particular since he knew they enjoyed them – or at least used to.

“I continued to buy them, thinking students would come back,” Biermaier said. “But they didn’t.”

Biermaier said he has also kept files for his customers – he searched through networks of book dealers or bookseller magazines for books they wanted. But eventually the Internet antiquated the process and replaced the book dealer networks.

Admitting the Internet has routed 50 percent of her traffic out of the store, Book House owner Kristen Eide-Tollefson said she was glad to know Biermaier is closing by choice and wasn’t having financial problems. 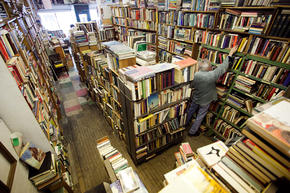 “It is disturbing to have so many stores closing, but it is also understandable,” Eide-Tollefson said. “In Biermaier’s case, we are really happy for him that he is retiring successful after 40 years.”

Biermaier said the new building owner will be renovating the apartments currently above the store but hasn’t decided what to do with the street-level space.

“It’s a wonderful store,” Eide-Tollefson added. “He’s contributed so much to the book culture. We’re really grateful for that.”