Mangala Sharma is living the American dream. She and her husband have good jobs. They own a home in the suburbs. Their two daughters are well- educated and on solid life paths.

Yet Sharma’s life wasn’t always this way. Sharma was born in Bhutan, a small country that borders India and China. In the mid- to late 1980s, the Bhutanese government began to crack down on ethnic minorities. Sharma’s family is Lhotshampa – a Nepali ethnic group in southern Bhutan – and had lived in Bhutan for four generations.

Many of her family members and friends were persecuted by the government — even imprisoned and tortured — and forced to leave the country. In fear for their lives, Sharma (then 26) and her husband fled to a refugee camp in Nepal in 1992.

“When we had to leave Bhutan, my youngest daughter was only 2 months old and my oldest daughter was 2 years old,” Sharma said. “We brought them and it was really hard. We were not sure whether we would survive.”

Sharma’s story and the stories of nine other Bhutanese refugees have been collected in an oral history project called “From Exile to Resettlement: The Voices of the Bhutanese in Minnesota.” The project was conducted by historian Andrea Klein Bergman, in a partnership with the Hennepin History Museum.

“I was interested in helping give a platform to the refugee communities in the Twin Cities,” Klein Bergman said.

The stories, photos and videos are posted on the project’s website. This availability was important to Klein Bergman. “Most oral histories that are captured for museums and historical societies that I have worked on over the years are archived away, and little is done outside of that,” she said.

In contrast, this project was meant to make participants’ stories – in their own words – accessible to the community.

“You can see their pictures and family photographs, hear their voices, and get a snapshot of what it was like living in the camps – and what it is like for newcomers to arrive here,” Klein Bergman said.

To preserve and educate

Sharma and her family were the first Bhutanese to arrive in Minnesota, back in 2007. Since then, almost 900 refugees have moved here.

Klein Bergman saw a need to raise awareness of this growing community.

“When you ask the general public if they have heard of the Bhutanese living in Minnesota, they often do not know where Bhutan is and what has happened to the hundred thousand southern Bhutanese people, let alone that they are our neighbors!” Klein Bergman said.

“There were two very important aspects to doing this oral history project,” she continued. “First, it is to help preserve language, family history and culture; it is a testimony of their survival and struggle to get here. Second, to help educate our community about Bhutan, the southern Bhutanese exile from their homeland and what it means to start over.” 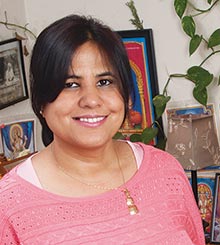 Sharma and her husband took an active role in helping their family and neighbors survive several transitions.

Sharma’s husband worked as a medical doctor in the refugee camps, while Sharma formed an organization to teach reading and writing, weaving, and other skills to camp residents. Through that organization – BRAVE: Bhutanese Refugees Aid for Victims of Violence – she also helped organize scholarships for 100 girls to receive higher education. Her human-rights advocacy work took her worldwide.

Sharma applied for asylum in the United States and left Nepal in 2000, moving to California. Her family joined her in 2003. They lived in Atlanta and later moved to Minnesota, setting in Roseville.

Once here, the couple sponsored other Bhutanese families looking to escape the camps, and they started the Nirvana Center to help newcomers assimilate to their new home.

Through it all, Sharma practiced kindness and generosity and kept her focus squarely on her two daughters.

She said that when they fled to Nepal, “We were thinking, ‘We left everything. We left our home, we left our property, we left our jobs, but at least we have the girls.’ “

“Our passion to give them a future and never to be a refugee again” propelled the couple on, she said.

‘We don’t have a history’

Sharma, who had learned English as a girl, was a translator on the oral history project and shared her own story.

“I really like that project because we don’t have a history,” she said, referring to a lack of documentation among the southern Bhutanese.

Sharma and Klein Bergman are looking to expand on the original project, and Sharma has ideas for an online museum and maybe a book.

“Ten oral histories are just not enough,” Klein Bergman said. “More are needed, especially from the elderly community members, to capture important history before it is lost.”

Bhutanese refugees around the world are taking notice of the project. Sharma and Klein Bergman have heard from other communities interested in undertaking similar work.

“Being a refugee means a lot of things, but mostly, the sense of loss,” Klein Bergman said. “Gathering these stories is crucial to help preserve the one thing they do have: their collective memories and their strength of survival for future generations.”