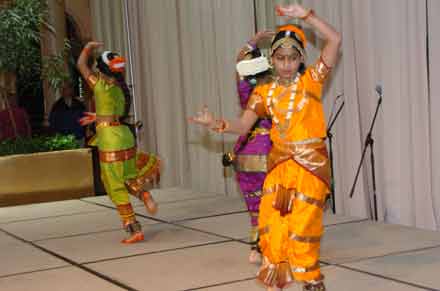 Dancers twirled at the Festival of India Sunday at St. Paul's Landmark Center.

In a kaleidoscope of rich, sparkling color, Aishwarya Menon whirls in circles, bumping her hips upward, and twisting her hands in intricate patterns to catchy bhangra beats. Her long, dark braided hair is bundled in white flowers as bangles clink against her wrists. Her friends surround her in equally bright fabrics, shaking and smiling for a packed house.

Menon, 15, a dancer with the School of India for Languages and Culture (SILC), has been performing at the Festival of India for the last seven years, experimenting with traditional, folk and Bollywood hits. While some of her friends might choose to hang out at the mall or go to a movie on a dreary Sunday afternoon, Menon has come to dance.

“I love it. It helps me stay in touch with my culture.”

The Festival of India, held in the spacious Landmark Center, has been a fixture in the Indian community in Minnesota since 1984. Each year, the India Association of Minnesota (IAM) puts on the event to celebrate India’s music, food, dance and culture. With crowds of 500-700 people on average, the festival is a way for the Indian community to connect with each other, as well as with the Twin Cities as a whole.

This year’s celebration began with the singing of the U.S. and Indian national anthems by some of the day’s youngest performers. As the delicious scent of curry filled the hall, MC Shivanthi Sathanandan took the stage, revving up the crowd as the first batch of dancers took their places. The first group, in which Menon is a member, got the audience clapping with a contemporary number, followed by a Carnatic vocal performance by three teenage girls in matching salwar kameezes and a perfectly synchronized pitch. The Bhangra Beauties hit the stage next, a group of elementary aged girls dressed in black velvet tracksuits with sequined pink hearts on their backs. They shook and clapped to a catchy Bollywood beat while they dared the crowd not to crack a smile.

The day continued with a throng of performers, many under the age of 18. Meenakshi Janarthanan used a mix of subtle head wobbles, eye movements and hand gestures to give a captivating performance of the Bharatanatyam style of dance from South India. Kingsuk showcased Hindi and Bengali music, reminiscent of Bollywood films gone by, and three young girls in rainbow-colored outfits, nose rings and bare feet danced the Bharatanatyam style again, moving with the ease and confidence of seasoned veterans.

For those not interested in music and dance, the festival offered much more. For $7, one could enjoy a plate of curried vegetables, rice and naan, or fresh samosas with spicy dipping sauces. The Chicago consulate of India had a spot to help with visa and passport services, and booths were set up in an arc around the hall providing real estate services, meditation seminars, Indian clothing and shoes for sale, and non-profit organizations promoting their projects. One such organization, Vibha, is U.S.-based but provides support to struggling communities across India through projects addressing child labor, illiteracy, health and homelessness.

Freny Irani, who runs a booth selling Indian clothes and trinkets, gives her proceeds to the Children’s Hospital in Bangalore, India. She has been working at the festival for the last 15 years and gets most of her merchandise from trips to India. The best part of the festival for Irani, though, is connecting with the community.

“It’s good fun because I meet people,” she said.

The Festival is just one part of what IAM plans each year for the Indian community in Minnesota. In August, a picnic is held to celebrate India’s Republic Day, and in May, IAM helps organize cultural performances for the Festival of Nations. IAM, according to former president Rabinder Bains, is continually searching for new ways to help integrate Indian-Americans into Twin Cities life, as well as to get them interested in events directed specifically to the Indian community.

They have hosted dinners at which U.S. Rep. Betty McCollum and Sen. Paul Wellstone were present, and raised funds for disaster relief in India. However, Indians as an immigrant group in Minnesota are doing well, settling into pockets in the suburbs. Although issues arise, they don’t have some of the same problems as other immigrant groups. “The Indian community is well-to-do economically,” says Bains. Most are highly educated before coming to the United States.

As the afternoon of festivities continued, an Appreciation Award was given to IAM President Ramesh Muniswany for his excellent work with the organization. Then, the Bhangra Beauties took the stage once more, as did other singers and dancers from SILC and private studios. The crowd, evermore intoxicated with the rich smells and sounds of India, clapped to the beat, cheered and sang while the performers never lost their luster. As Aishwarya Menon knows firsthand, the key to performing well at the annual Festival of India is having passion.