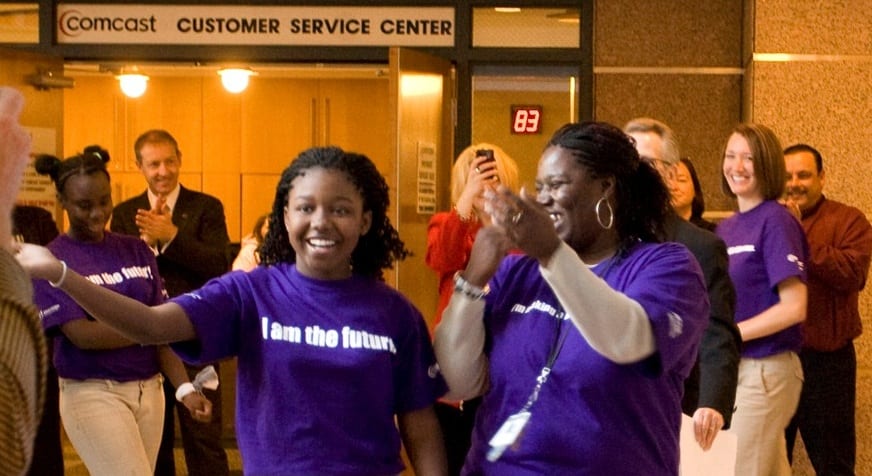 Malena Talley waited tentatively at the red carpet watching the door for her “Little.” This feeling of apprehension was not new to her. For the third time, she was meeting someone new from the Big Brother Big Sister program—but this time she was the mentor.

Talley remembers the friendships she made with her big sisters, but mostly she remembers the influence they had on her life. With a difficult childhood, the mentorship program allowed her to build her self-esteem and to focus on her education, lessons she hopes to pass onto another child in similar circumstances. Talley, a call center supervisor for Comcast in downtown St. Paul, is participating in a new Big Brothers Big Sisters program.

At a red-carpet event in Saint Paul October 13, twenty-two fifth and sixth grade students from the KIPP: Stand Academy in Minneapolis met, for the first time, their “Bigs.” Through a rigourous matching process, the Big Brother Big Sister program had matched Talley with sixth-grader TaNysha. Dubbed “Beyond School Walls” the program will bring school children to the Comcast grounds for an hour every other week and pair them with volunteers who will mentor them. TaNysha was at a People Serving People shelter when she filled out forms for the program.

“I like art,” said TaNysha. “And I love making dresses.” After having lunch together, TaNysha said that she has already taken a liking to Talley and looks forward to meeting her every week.

Comcast Vice President of Community Investment Charisse R. Lillie says the Beyond School Walls program is “philanthropy made easy.” The $10 million program is a Comcast national initiative that will include leadership development and training for participants in the Big Brother Big Sister program.

Senator Mee Moua, who was present for the program launch, encouraged the middle schoolers to take advantage of the program.

“The Big Brother Big Sister program is one of the most successful mentorship models in the country that gives support and nurturing to children who need such a support system,” said Moua. “As the child of immigrants who barely spoke English, could not drive, or understand the system, I couldn’t have made it without surrogates in my life, who stepped in when my parents couldn’t.”

With Minnesota struggling with one of the highest achievement gaps in the country, a program that focuses on developing relationships between students and working professionals with an emphasis on post-secondary goals is certainly one to watch.