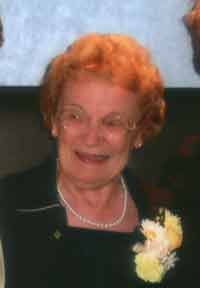 Betty Driscoll, a longtime secretarial staffer for the local Hotel Employees and Restaurant Employees union, died July 6 after a brief illness. She was 80 years old.

Born on a farm in Spring Valley, Wisconsin, Driscoll worked for HERE for 41 years, retiring in 2004. She began her career in April 1963 with Local 665 and worked through the 1975 merger of five HERE locals into Local 17.

Driscoll was a member of Local 12 of the Office and Professional Employees International Union (OPEIU).

“Betty went from the time of carbon paper to the time of [Microsoft] Word,” said Jaye Rykunyk, UNITE HERE state director, who worked with Driscoll for more than 25 years. “She was really dedicated to the members of Local 17 and to the labor movement.”

Other longtime HERE colleagues shared memories of Driscoll.
“She stayed many times to the wee hours of the morning to get things finished,” said Lee Ann Peters, who worked 19 years with Driscoll. “She hand-typed all the contracts.”

“She was one of the speediest typists I’ve ever seen,” added Local 17’s Dede Thorson, who worked more than 30 years with Driscoll.

Thorson recalled that Driscoll met OPEIU friends for lunch “almost every day” at the former Cafe di Napoli (a HERE shop, of course). Driscoll and her husband Vincent, who preceded her in death, enjoyed spending weekends on their houseboat on the St. Croix River, Thorson remembered.

“We relied heavily on her,” said Bill McCarthy, Minneapolis Central Labor Union Council (CLUC) president, who worked with Driscoll when he was president of Local 17 from 1996-2002. “She had all that institutional knowledge of the organization and the history of past leaders which was very helpful.”

CLUC delegates observed a moment of silence for Driscoll at the monthly CLUC meeting July 12.