“remember, a winky face to a hopeful mate online/in a text is just as, if not more, creepy as it is in person. especially with a nose ;-)” (@meatpit, February 2)

“If I see one more nollie flip out of a krooked grind Im going to shoot myself.” (@DavidJaimes456)

“‘most rude and passive-aggro things written on tip jars’ would be a good tumblr. I just saw: ‘Thanks for tipping us, now we can buy food'” (@EmilyGould, February 4)

“I love how as soon as it gets above 25 fat men no longer wear coats outside. Well, maybe love isn’t the right word.” (@LilyTroia, February 5)

“Just came from the most ridic yoga class ever — straight outta Portlandia. And no, I do not want to ‘open up my womb,’ thank you very much.” (@plesserchick, February 6)

“anyone know any good examples of brand characters getting skinnier/hotter/younger?” (@jasonzabel, February 7) “Oh yeah, the chick for raisins has got me sprung these days.” (@MarcusMichalik)

“I just threw some kazoo on this bitch” (@KanyeWest, February 7)

“normally i report spam bots but @jennzz2999 is giving me serious lulz right now. 79 tweets in the last 4hrs tell the story of her crazy life” (@partydino, February 9)

“Someone was real excited to pull into half priced books [photo above]” (@mediumzach, February 13)

“The collective amount the dudes at tonight’s Robyn show have spent on their jeans would eliminate the national debt” (@mplsdice, February 13)

“‘It’s usually not a good thing when you have a fire in an arcade, but I guess in their case it’s good.’ Kathy Lee Gifford being clueless.” (@katiesisneros, February 13)

“Dear February- Did not think you could get worse. You did. Proceed directly to the Old Country Dick Buffet.” (@sandusks, February 18)

“I feel so blessed that this cab driver is sharing his acoustic Sheryl Crow CD with me.” (@thatwhitebitch, February 20) 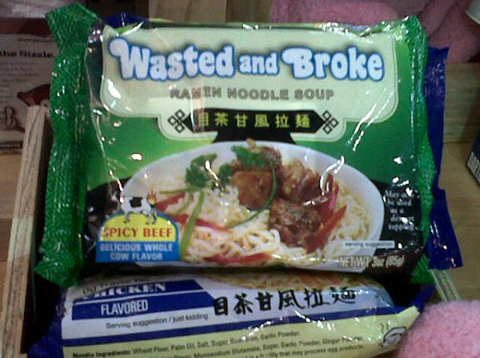 “retweet after me. i promise to funk promise 2 keep its promise you’ll keep d funk, tweet unto others as u would have others tweet unto u.” (@george_clinton, February 23)

“I received a text message on Saturday that said, ‘Take me home tonight’ and it took me until today to realize it wasn’t song lyrics.” (@heusar, February 24)

“just sober enough to realize that those guys who said ‘e is my favorite number too!’ & ‘i also love game theory!’ probably had an agenda.” (@marieshea, February 26)

“What’s a graceful way to say ‘sure we can hang out but just as friends’ that also conveys ‘I’m not that interested in being friends either'” (@heusar, February 28)