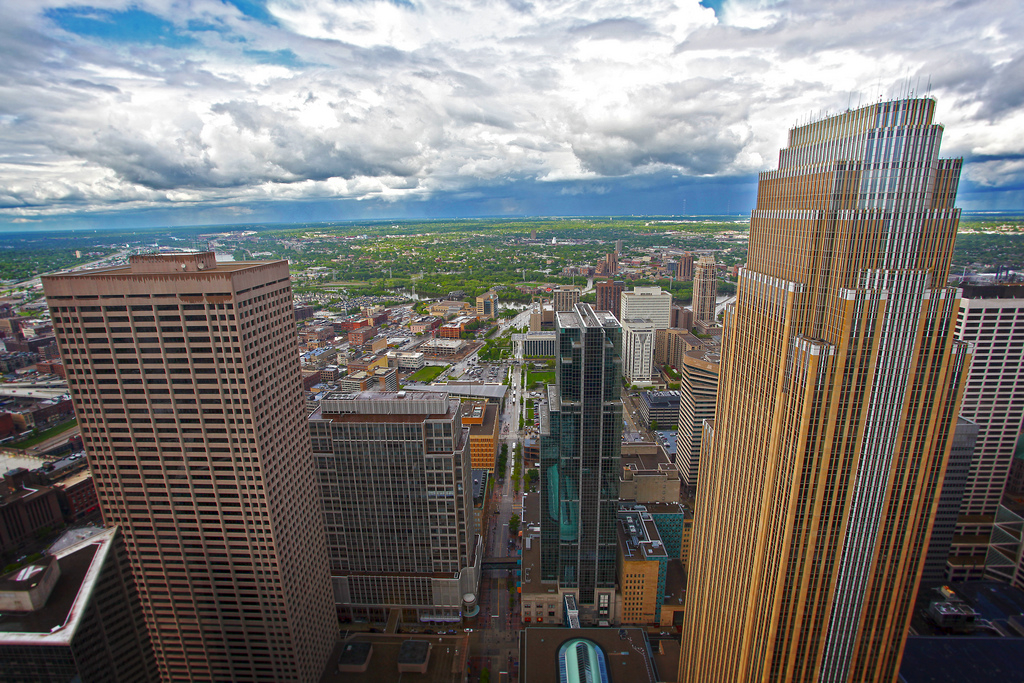 Have I told you I work downtown now? Well, I work downtown now! I started a new job in June and it brings me into downtown Minneapolis most of the time (with a trip across the border to a neighboring city once a week). I was so excited to leave my days of driving to the ‘burbs behind and start biking to work every day. I’ve been thinking about the pros of working downtown lately and have compiled a little list (because I love making lists).

I’ve always wanted to start and end my day with a walk or a bike ride and now I get to do just that. Is it all I’d hoped for? Pretty much. I’ve lately been incredibly lazy and antisocial and have been choosing episodes of How I Met Your Mother over Music & Movies in the Park and sleeping over going out for drinks. Luckily no matter how much time I spend sitting on my butt, I still spend four days a week sitting on my butt while pedaling. The daily exercise makes me feel less guilty about all of the time I’m spending with my couch.

I have felt like the ride should be getting easier faster though. I guess it seems like longer than just two months of biking through Loring Park and heading downtown but I keep waiting for the ride up Hennepin and the subsequent hills to get easier. “Give it time, you’ve only been at it for two months,” I’m told. So I’ll give do as instructed. I did keep up pretty well with the Jimmy John’s guy climbing my final two hills yesterday on the commute home. Those guys bike a lot and eat a lot of sandwiches so I felt okay about it since I wasn’t quite at the point of panting or fainting or anything else gross.

I brought my lunch most days at my last job because the options for food in the northwestern ‘burbs are as follows: Pineda Tacos (delicious, but you can only go so often), generic Thai restaurant (meh), or one of four fast food chains or greasy bars.  Working downtown brings me way too close to ALL OF THE FOOD TRUCKS. The new coworkers often do a food-truck Friday so I have a goal of trying every truck. I also meet friends for lunch now and again when I remember who else works downtown. I always forget that other people work near me now!

The only problem with this is that I am eating quite a lot and spending more money than if I were bringing a lunch. Just like everything else in life, I’ve got to find the right balance that works for me. I’ve got a list of trucks I want to try as well as some downtown restaurants and cafes that I can keep warm in when it’s too cold for the trucks to be out. And then, just like in the ‘burbs, there’s always Chipotle.

I went for a walk after lunch yesterday to wake myself up after a pasta lunch (leftover and gluten-free—I could high-five myself were it possible…) and witnessed a dude skateboarding down the sidewalk holding a small dog in his arms. Now, I bike with Ninja sometimes, but there is something about a dude on skateboard with a fluffy little dog curled up against him for the ride that’s a little more interesting. I watched everyone out on the streets, from business casual to trashy to fancypants and everywhere in between. I stopped to take a photo with some big cement balls as well as a brief sit on one of the weird stick benches by the courthouse. Being able to take a four-block walk in any direction and have interesting and ever-changing scenery is a huge pro of working downtown. While I did have a lake to walk around and my last job, it was always the same and always surrounded by stinky, bitchy geese.

The new office is only a short walk from my yoga studio, a couple blocks from my new bank (I joined a credit union!), and only two miles from my home. There’s a Walgreen’s, a grocery, a spa, and a post office all on my way home from the office. On Thursdays there’s even a farmers’ market! The convenience of stopping by the bank during lunch without getting in the car is worth mentioning.

Working downtown is—so far—all it was cracked up to be. When it starts to get too cold, I’ll put on my wool long underwear and hop back on the bike. Or if I fail at winter biking like I did last year, there’s always the 15-20 minute ride on the bus!

All in all, I’m happy about where I’m at now and if you’re downtown, too, well, I’ll see you at the food trucks!