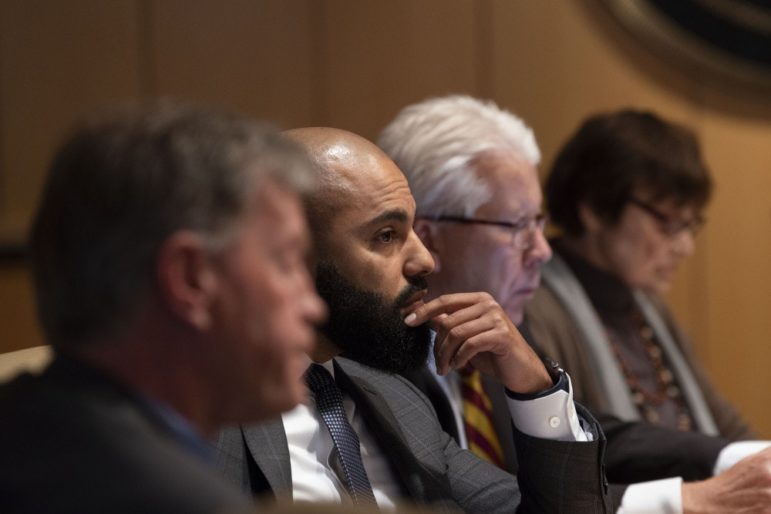 Regent Abdul Omari listens in on the Board of Regents' special session on Friday, April 26. Photo courtesy of MNDaily.

UMN student government reaffirms push to rename campus buildings
The Minnesota Student Association released a letter in the wake of a decision that came after nearly a year-long contention over four University of Minnesota campus buildings named after figures with racist, anti-semitic pasts. The state university’s governing body, the Board of Regents, voted 10-1 against the renaming of Coffman Union, Coffey Hall, Nicholson Hall and Middlebrook Hall, names which go as far back as 1851. In pushing back against this decision, the MSA-issued letter reads, “We strongly believe that renaming is the first step of reckoning with our University’s [history]. That is why, to us, renaming is a when, not an if.”

MSA will meet with the newly-appointed regents, as well as the incoming University President Joan Gabel, to continue conversations about renaming.

Minnesota may give a boost to addiction programs that use traditional healing practices
A proposal included in Governor Tim Walz’s budget, if approved, allocates $2.4 million to combat the opioids crisis severely harrying Native communities statewide. But this proposal is quite significant and unique, set especially against the backdrop of Minnesota where American Indians are “five times more likely to die of a drug overdose.” It would annually finance the access to traditional healing programs, in lieu of conventional treatments, for those from the state’s 11 tribal nations and 5 urban American Indian communities.

The proposal, which may very well become a model for adoption by other states, was developed under the direction of Minnesota’s American Indian Mental Health Advisory Council.

For more on the story, read MinnPost.

New St. Paul baseball museum chronicles local Black history
Contiguous to the St. Paul Saints’ downtown stadium is the City of Baseball Museum that opened on May 16. It is, in many ways, the historical culmination of local Black history and the city’s unique impact on the growth of baseball in the country, the end to a century-long racial exclusion in the sport and beyond. The museum tells this unique story, from the late 19th century to the post-war period and the present, with hundreds of items, images and more on display.

“Black baseball is central to the history of St. Paul,” said Michael Goldklang, Saints Senior VP and General Counsel. “A lot of people don’t know the pre-Jackie Robinson [days]. We honor the St. Paul Colored Gophers… They weren’t affiliated with the Negro Leagues but played in an era preceding the Negro Leagues.”

Check out the story on Spokesman-Recorder.