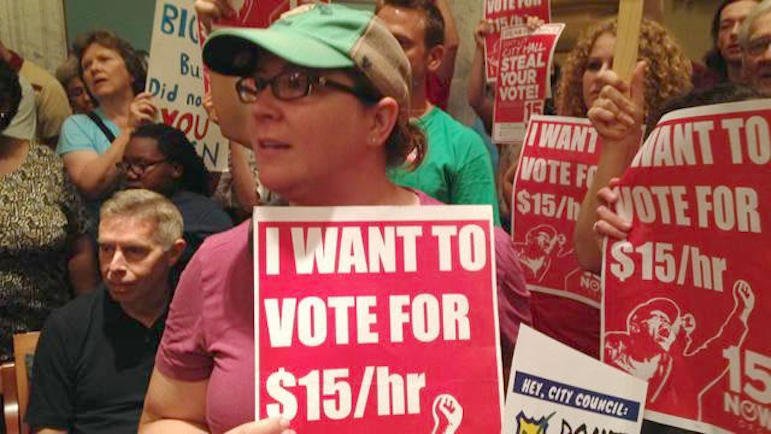 Advocates for a $15 minimum wage in Minneapolis say the issue should be allowed to go before voters in November. (Photo courtesy of 15Now Minnesota and Workday Minnesota).

Following the Aug. 22 court decision to include the wage increase measure on November’s ballot, the Minneapolis City Council decided to appeal the matter to the state Supreme Court, siting legality issues.

Advocates for the wage increase gathered in front of the City Hall at 9:30 a.m., on the morning of Wednesday, Aug. 31 to voice their concerns. Later that afternoon, the Minnesota Supreme Court decided against putting the minimum wage question on the ballot.

“The City of Minneapolis is wasting taxpayer money to defend the poverty wages,” 15Now Minnesota said in announcing the event.

MN Daily’s Raj Chaduvula reports – Ward 6 Minneapolis Council Member Abdi Warsame speaks out on the “fear-mongering,” and spurning stigmatization of Somali-Americans furthered by an opinion piece by former Mayor of St. Paul Norm Coleman, published by the Star Tribune in April of this year.

Warsame, who was elected to the City Council in 2013, was the first Somali member of the council who actively practiced Islam. Since then, Warsame said he has continually found himself answering questions about radicalization and terrorism.

“No other councilman has to defend his community. … They’re not second guessed,” he said.

More on Warsame’s concerns via The Minnesota Daily.

Thirteen people were arrested in this 2014 demonstration protesting low wages for workers at Minneapolis-St. Paul International Airport. (Photo by Michael Moore and via Workday Minnesota)