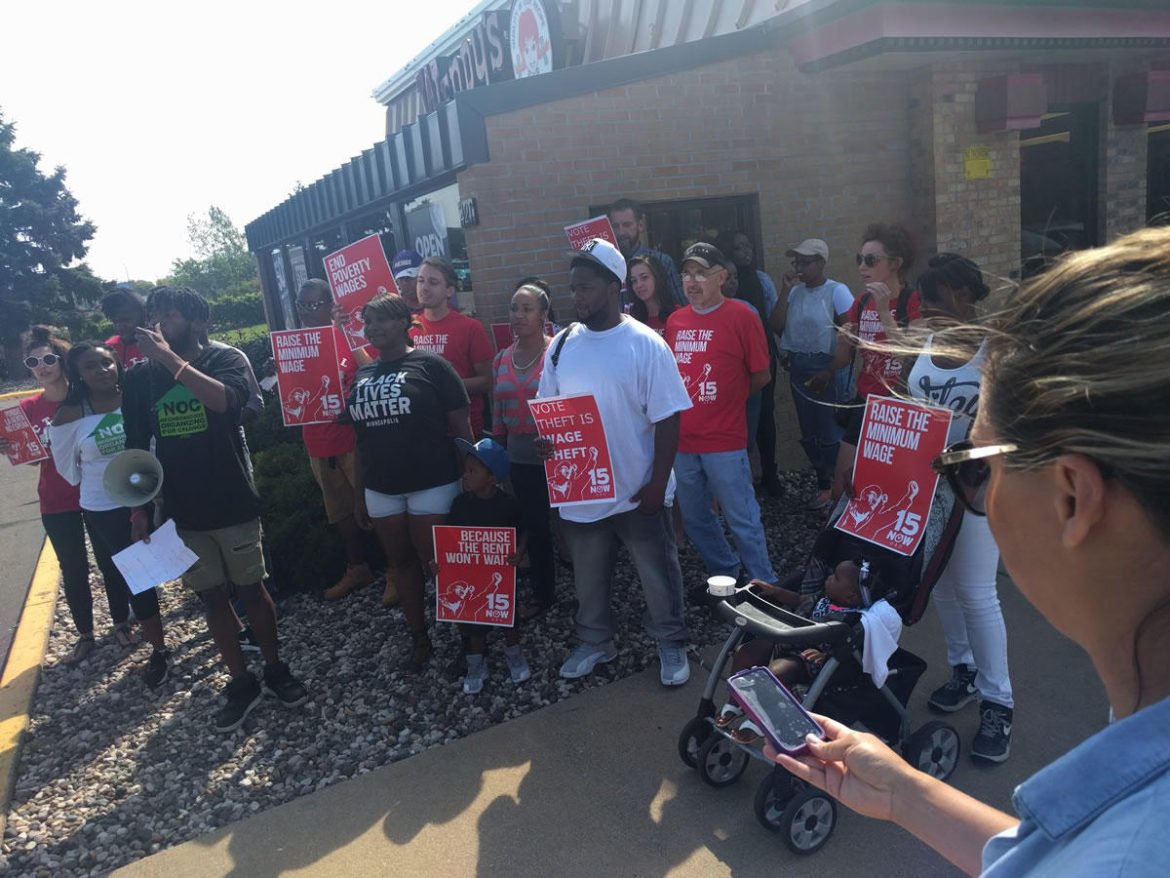 Members of the Minneapolis $15 campaign, exuberant after a win in court, meet with the media. Photo by Becky Dernbach.

Barb Kucera from Workday Minnesota reported on the growing momentum for the $15 minimum wage ballot measure in Minneapolis.

On Monday, Hennepin County Judge Susan Robiner issued a decision ordering the City of Minneapolis to put the $15 minimum wage charter amendment on the November 2016 ballot. She ruled the City Council’s action to block the amendment, taken earlier in August, lacked basis in Minnesota law.

Members of the campaign were exuberant as they spoke to the media in the North Minneapolis Wendy’s parking lot. They included 15 Now Minnesota, Neighborhoods Organizing for Change and CTUL (Centro de Trabajadores Unidos en Lucha/Center of Workers United in Struggle).

Read more about the campaign and next steps at Workday Minnesota.

Is Jill Stein just going to steal votes? What does she have to offer Minnesotans? What is the Green Party’s strategy? These are the questions Minnesota Spokesman-Recorder’s Charles Hallman answers in his interview with the Green Party presidential candidate. Stein, who also ran for president in 2012, spoke on Neighborhoods Organizing for Change’s “Change Black America Forum” on Aug. 16.

Over 200 persons, mostly Black, packed the theater for what was billed as “a community conversation between Dr. Stein, NOC Executive Director Anthony Newby, a panel of six Black community members, and questions from the audience,” according to a NOC press release.

Stein told the audience, “I think I’m the only candidate out there advocating for reparations.” That, along with her many responses, drew repeated cheers and applause throughout the one-hour forum. When the candidate was asked about education, environmental justice, and a $15 minimum wage, she pledged that the Black community “will be the first in line” for her Green new deal plan.

Learn more about Stein’s platform at the Minnesota Spokesman-Recorder.

The Column reports that Macalester College and the University of Minnesota-Twin Cities were both named in the Top 30 LGBTQ-friendly colleges and universities. The Top 30 list is not ranked. Both schools were among the top in 2015, 2014, and 2013.

To find the whole list, head over to The Column.