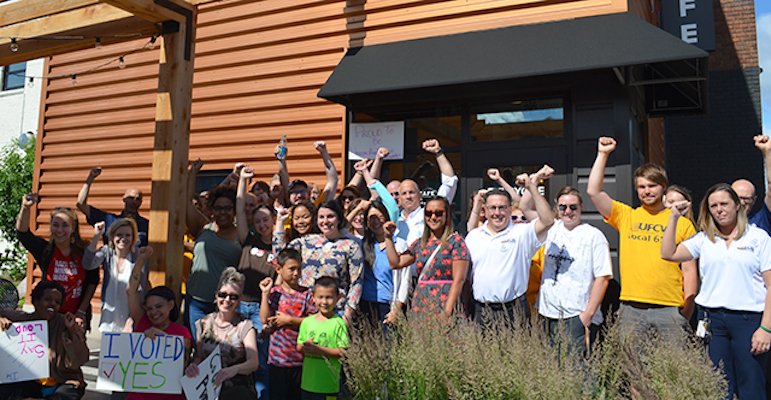 Seward workers celebrating back in June after 94 percent of their nearly 300 workers voted to join the union.

MinnPost reported on the how nearly 450 employees from several grocery co-ops, including Linden Hills, Eastside and Seward Co-ops, have recently formed unions. The move is less about wages and benefits, and more about being included in decision making.

Unlike typical union contracts, Minneapolis co-op workers say their efforts weren’t primarily about wages. “For most people … it’s less about wages and employee benefits and more so on what the co-op’s going to be doing in the next 40 years,” said Max Storey, a worker at Seward Co-op’s Friendship store.

The Column has reported that Nova Classical Academy in St. Paul will pay $120,000 in damages to the Edwards family due to transgender discrimination.

According to the settlement, Nova Classical Academy will pay damages of $120,000 to the Edwards’. The school will also “revise its policies and practices to support its transgender and gender nonconforming students.”

The Edwards’ daughter enrolled in Nova in the fall of 2015. After encountering some hostile comments for being gender nonconforming, staff prepared gender-inclusive training but were blocked by school leadership, according to a civil rights complaint filed in April with the City of St. Paul.

Learn more about the case from The Column.

The incidents of the recent past have led to one conclusion. Based on this issue alone, President Donald J. Trump is in fact a root cause of violence against this nation’s citizens and his unwillingness to denounce – and more importantly, take actions against – the violent white supremacists terrorizing inhabitants of this land makes him unfit to lead.

Therefore, Insight News, an institution dedicated to the freedoms, liberties and well-being of all of this nation’s inhabitants, calls for the immediate resignation of President Donald J. Trump.