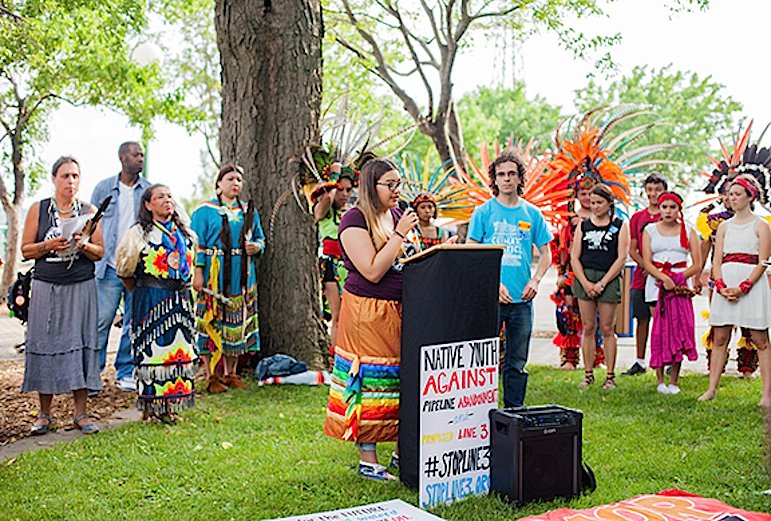 Photo courtesy of The Circle News.

Ojibwe writer and activist Winona Laduke penned this update in the Circle News detailing how multiple legal precedents across the country bode well for tribal rights in the case against Canadian oil company Enbridge.

“Michigan’s example may be a forewarning to Minnesota public officials. In particular, drinking water issues are already a concern in many northern tribal communities, and new threats will likely exacerbate those conditions,” Honor the Earth Attorney Frank Bibeau said.

Read the full article at the Circle News.

Minnesota Women’s Press brings us the story of Yasmin Mullings and Karen Kugler who, as part of the Joint Special Victims Unit for the Ramsey County District Attorney’s office, have been uniquely successful in getting convictions and long prison sentences for offenders.

The unit is noted for getting convictions, and long prison sentences: Of 21 recent cases, 86 percent of defendants went to prison; half for at least 14 years. As a comparison, 54 percent of the prison sentences for similar crimes in Hennepin County were less than five years.

But more than just the numbers, the prosecutorial pair are deeply dedicated to their work. Learn more at Minnesota Women’s Press.

Minnesota Spokesman-Recorder reports that the Kmart department store – which has blocked Nicollet Avenue at Lake Street since 1977 has been bought by the city of Minneapolis, setting in motion the potential for lots of new development amid one of Minneapolis’ most diverse neighborhoods.

Plans to reopen Nicollet Avenue at Lake Street have been in the works for some time. According to the City, the idea would be to reconnect neighborhoods, reestablish the street grid and create new development on the 10 acres. Development on the site has the potential to bring new jobs, quality housing for a variety of income levels, and retail options to the area, according to the City’s press release.

To read more on the city’s plans, head over to MSR News Online.