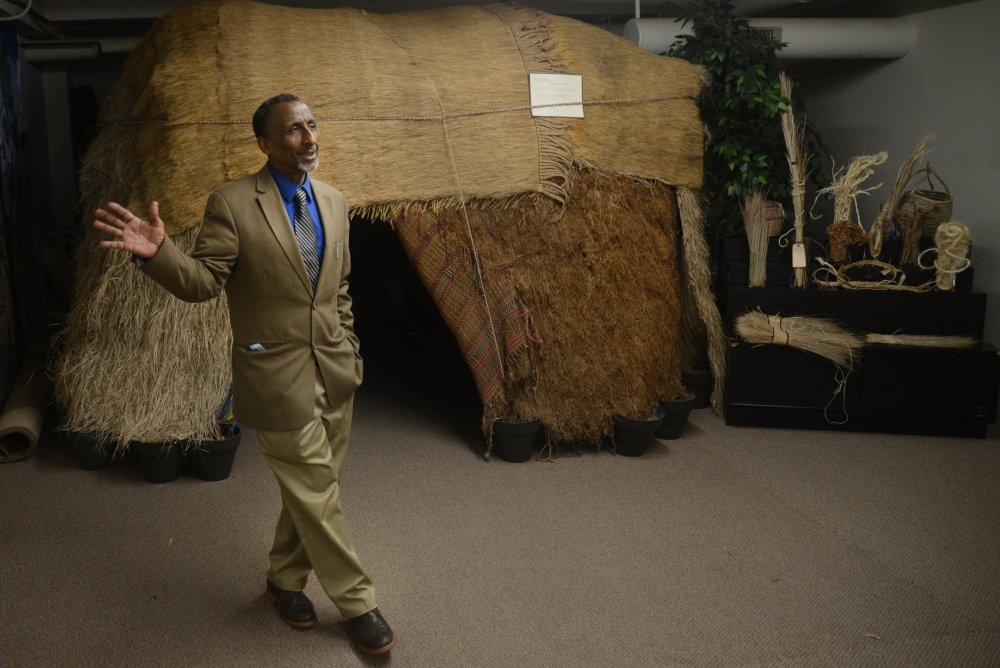 Osman Mohamed Ali stands in front of a traditional nomad somali hut and homestead at the Somali Museum of Minnesota on Friday, April 14, 2017 in Minneapolis.

When Osman Mohamed Ali returned to Somalia in 2009, he noticed few cultural artifacts remained. Most relics had been destroyed in the country’s 1991 civil war, Ali said, and there were no museums left in Somalia to preserve remaining items.

Worried the last artifacts would be destroyed, Ali began collecting those he could find and brought them to the U.S. In 2011, Ali founded the Somali Museum of Minnesota, which now holds hundreds of artifacts from the country.

Now, the museum is looking to expand. A bill sponsored by Rep. Ilhan Omar, DFL-Minneapolis, would grant $200,000 to the museum over the next two years to expand programs and exhibits. The museum has several cultural programs but lacks adequate room to operate at its current location — tucked into a commercial basement on East Lake Street.

“The museum represents culture and heritage for our community,”

Read more about the museum’s plans to expand and showcase more than 700 artifacts that are being kept in storage at the Minnesota Daily.

As Minneapolis appears poised to institute a $15 minimum wage, 15Now Minnesota and other advocates are keeping up the pressure to make sure it happens.

This week several Minneapolis City Council members announced their support for a $15 minimum wage for businesses operating in the city, meaning at least seven members of the 13-member council would vote in favor of such a measure. The details have not yet been worked out and nothing is currently before the council.

If Minneapolis were to adopt a $15 minimum wage, it would be the first major city in the Midwest to do so, joining communities such as Seattle, San Francisco, Los Angeles and Washington, D.C.

Read more about what advocacy groups are doing to make sure $15 minimum wage becomes a reality as well as which obstacles still need to be faced at Workday Minnesota.

Since 2012, Minneapolis Public Schools (MPS) have been awarded Hennepin County grants for capital improvement and to acquire new equipment for the district’s athletic facilities.

“Our physical education classes can come in here. Our dance team can come in, and our cheerleaders can come in and practice as well.  Not only is it for lifting weights but also for conditioning and a practice area when the weather is not too good to go outside.”

Find out more about this new fitness center as well as how big of an impact it will have on the students at Minnesota Spokesman-Recorder.