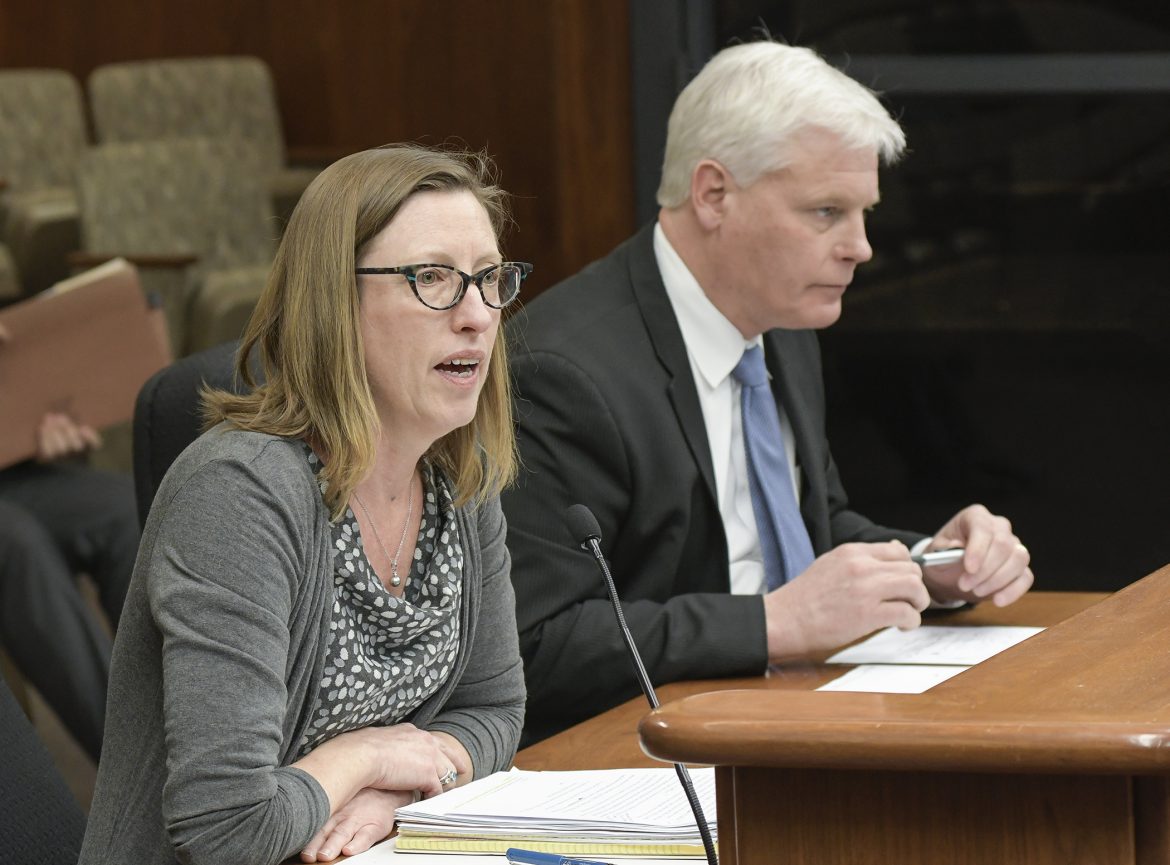 Lisa Stratton, co-founder and senior counsel at Gender Justice, testifies March 13 before the House Job Growth and Energy Affordability Policy and Finance Committee in support of a bill sponsored by Rep. Paul Thissen, right, that would prohibit employers from requiring disclosure of past wages. Photo by Andrew VonBank for the Session Daily.

The State House is considering a bill that would seek to address the wage gap by prohibiting employers to ask potential employees how much money they made at their last job. People of color and women tend to make less money on average than white men while performing the same jobs, and the question of the previous salary reinforces this as employers continue paying people what they have earned in the past.

“This bill would help — but it’s not going to solve — the wage gap,” Stratton [senior counsel at Gender Justice] said. “But it’s an important step that can be taken, and it would, more than anything, encourage employers to de-bias their hiring processes. It will ensure people are paid for their new job, not their old one.”

To learn more about this bill and its potential implications for labor and employment, see Session Daily.

The latest data on health rankings for Minnesota’s counties tell a story of racial and ethnic disparity. One of the striking statistics is that for American Indians, the premature death rate is three times as high as that for white folks. For black folks, it is twice as high than that for white folks.

“We can’t be a healthy, thriving nation if we continue to have entire communities and populations behind,” said Dr. Richard Beser, president and CEO of the Robert Woods Johnson Foundation, in a released statement. “Every community should use their County Health Rankings data, work together, and find solutions so that all babies, kids, and adults — regardless of their race or ethnicity — have the same opportunities to be healthy.”

Learn more about the geographic, racial, and ethnic divides of health in Minnesota at the MinnPost.

Kith + Kin Chorus, a newly-formed music group, will be performing a benefit concert for CAPI USA, a nonprofit that services the immigrant and refugee community through career programming, food and nutrition, health services, and more. The group selected CAPI USA out of a desire to serve their neighbors and foster community.

“It just felt right. I mean, these are our neighbors and they need to know that they have a home here and that people have their back,” said Ries [member of Kith + Kin].

Read more about the event and the work of CAPI USA at MinnPost.

While Hennepin County residents continue to demand justice for police violence against community members, the Minneapolis Police Department is putting forward a new plan to implement cultural changes that would attempt to curb violence. The changes would include a new policy around body cameras requiring officers to document reasoning for turning off a camera and a push for officer wellness, with weekly meditation sessions and yoga for police officers. Debriefing after traumatic events would also be part of this new culture.

“[Police Chief Medaria Arradondo] said he wants to create a climate where even a rookie cop would feel comfortable intervening if a field training officer was acting inappropriately. “