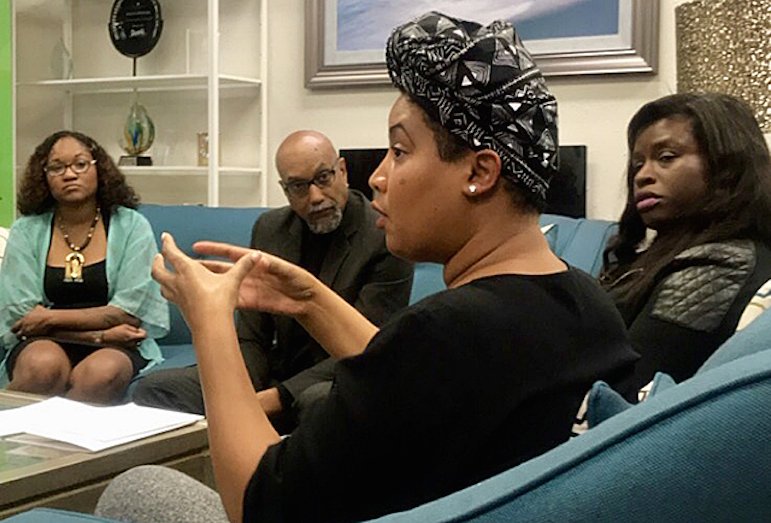 Raeisha Williams (center) speaks on a panel about the discrimination Black candidates face during elections. Photo courtesy of MinnPost.

We often ignore the burning question about what it’s like for Black candidates to run for political office in the metro area to some of the worst racial disparities in the country, as MinnPost’s Community Sketchbook reports. On Oct. 24, a panel discussion was held in North Minneapolis called “Running Black,” shedding light on the discrimination these candidates face in their day-to-day events.

Samantha Pree-Stinson, a Green Party candidate for Minneapolis City Council Ward 3, organized the forum, and said the comments from the St. Paul police union were indicative of the double standard Black candidates often have to confront.

“There are a separate set of rules and standards for us. No degree, no amount of money, no experience can buy respect and human dignity for us in this country,” she said. “It is not just voters who are disenfranchised. It’s also candidates.”

Learn more about the rising ensemble from MinnPost.

Biology instructors at the University of Minnesota on Saturday came together to brainstorm how to close gender and minority gaps in STEM classes. A new group called EDU-STEM, met for the first time this week and is trying to devise solutions that could decrease disparities.

Throughout the EDU-STEM meeting, participants proposed and debated solutions to close these gaps in biology or other STEM classrooms.

As a whole, the group decided on five “interventions” to bring to their home campuses: group exams as a retake option, affirmation exercises, a social media campaign, changing the grade distribution and implementing active learning techniques.

Learn more about their plan to change the future of student success from the Minnesota Daily.

Ten weeks after Donald Trump was elected, 100,000 marched in St. Paul alone to the Minnesota Capitol. Many people helped organize the event and hoped it would make people feel empowered and compelled to act. But now, 10 months after the historic actions, organizers are figuring out how to keep that momentum moving.

“The important thing is to just show up in solidarity and be shoulder-to-shoulder with other people. It’s an opportunity to build relationships and ask questions and to really push yourself out of your comfort zone,” Bethany Bradley says.

Learn more about the Women’s March and the continuing movement at the Minnesota Women’s Press.