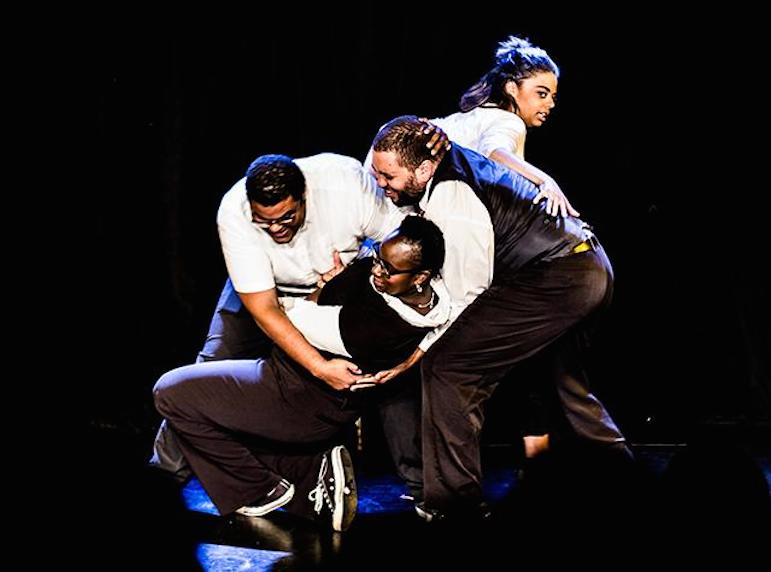 Blackout Improv have created something where they have the freedom to talk freely about things affecting their communities. Photo courtesy of Blackout Improv.

Blackout Improv, Minnesota’s first and only all-Black improv ensemble is making waves in the local comedy scene, as MinnPost’s Community Sketchbook reports. As they bring to life skits, games and scenarios that provide sharp social and political commentary, Blackout Improv also creates a cathartic space for the performers to truly represent themselves.

Nothing is off limits, and they’ve touched on everything from interracial sex and police violence to racism and food. They’ve even done shows in the aftermath of the Philando Castile verdict and Jamar Clark shooting.

“That was my turning point as a comic, like I never thought about what happens when something tragic happens and you still have to be funny,” ensemble member John Gebretatose remembers. “So when the Jamar Clark shooting happened, I was just like we’re going to still do this and just talk straight from the heart. And if it’s not funny, well we deserve to not be funny right now.”

Learn more about the rising ensemble from MinnPost.

Mayoral candidate forum examines the future of arts in Minneapolis

With Minneapolis’ large and dedicated arts community, and with the many new developments, businesses and transportation options available to the city’s growing populace, what place does the arts have among the City of Lakes future?

An audit conducted earlier last year for the University of Minnesota’s health services revealed major disparities for the healthcare of school’s transgender students. The findings spurred the creation of a new Transgender Health Clinic, available to all transgender members of the UMN community.

Some of these barriers include clinicians using incorrect pronouns or names, health insurance barriers and high out-of-pocket costs, as well as difficulty accessing specific healthcare like hormone therapy or surgeries.

Learn more about how the audit’s findings inspired new, more inclusive services and training from the Minnesota Daily.