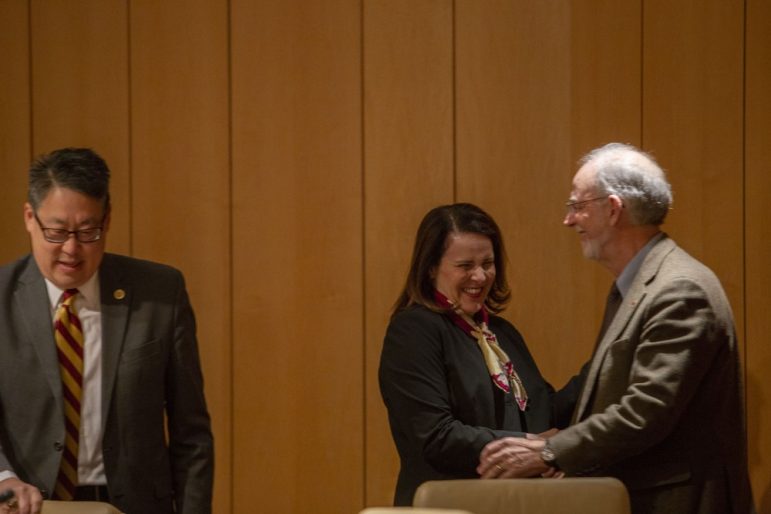 University President-designate Joan Gabel shakes the hand of Regent Ken Powell after being voted into the job at McNamara Alumni Center. Photo courtesy of MN Daily.

The Board of Regents voted to confirm Joan Gabel with a five-year contract as the next president of the university. Gabel visited all five campuses during the interview process and answered questions about her vision of higher education. When asked about student debt, Gabel said, “We really need to be thinking about clever ways to make sure students can afford education and I think it’s very clear that we are starting to inch up on what the marked can bear, even for students who don’t have fiscal constraints.”

While she ultimately earned high praise from stakeholders, the appointment process was not without controversy, as she was named as the sole finalist, which has drawn criticism in terms of transparency. In addition to the process, there were questions about her non-traditional background; Gabel has a JD not a PhD and she was a dean of a business school.

Find out more at MNDaily.

Penn and 44th in the Victory neighborhood of North Minneapolis is home to several businesses that cars have crashed into in the past few years, including most recently ramen restaurant Tori 44. This is the third time a car has crashed into its space in the last year.

Victory Neighborhood Association (ViNA) Board Chair Brandon Knez is concerned about safety, “There isn’t much signage. There isn’t much in the way of barriers. There is just a really, fairly-good curve, right there before the 44th and Penn stoplight. In the old days, before the reconstruction a few years back, there was a stoplight you could see from Victory and that would slow you down.”

Learn more about what community members and elected officials are discussing at North News.

The Women’s Drum Center has expanded

The Women’s Drum Center is still in the Dow Building at 2242 University Ave. W., St. Paul but in a much larger space. WDC is a nonprofit organization that has served mostly female students 12 and up for over 20 years with classes and workshops.

Bettie Seitzer, president of the WDC board, a member of the drumHeart Ensemble, and an instructor explained why this work is important, “Historically, women were not allowed to drum in many parts of the world,” she said. “At WDC, we understand the transformative power of drumming for both individuals and groups. We support the nurturance of women’s talents as musicians, composers, teachers, and leaders.”