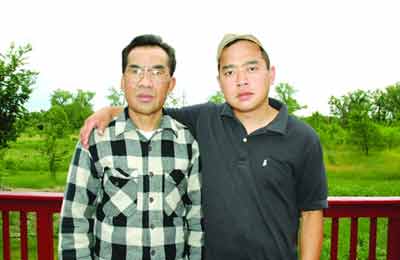 Thirteen years ago doctors gave Cher Su Vang the unfortunate news that his kidneys were failing. Facing a life-and death-situation, Vang’s only chance for survival was to find a donor organ.

Placed on a long waiting list, Vang withstood the daily torment of dialysis (filtering his blood through a machine) for two-and-a-half painful years until a matching organ could be found.

When the time finally came, Vang was matched with a cadaver’s kidney (from an elderly man who recently passed away). Though able to survive, doctors warned Vang that there was a chance the kidney would eventually fail due to the old age of the donated organ.

So when Vang started complaining to doctors in the beginning of this year about recurring health issues, he wasn’t surprised when they told him that the borrowed kidneys were on their way to failure.

Rather than seeing his father go through the painful ordeal of daily dialysis treatment, David, 27, stepped up and offered to donate one of his healthy kidneys. A living organ from a family member is the best and most successful situation for an organ transplant.

Researching the risks involved, David found that his chances to lead a long, normal life with only one kidney was very high. “I couldn’t bear to see my dad go through the painful ordeal of dialysis again while waiting for another donor to show up. The sacrifice is a small price to pay.”

Spending only one extra night in the hospital after the operation, David is surprisingly near his normal self. Warned not to perform any physically strenuous activities for four weeks, David has already returned back to work after less than one week of recovery.

“Today’s medical technology is amazing,” David applauded. “The largest incision the doctors had to make is no longer then three inches and other than a little soreness, I feel great.”

Using the laparoscopic technique, surgeons can now take a person’s organs out without having to make large, life-altering cuts.

Realizing the risk his son took to save his own life, Cher Su feels privileged to have a son like David. “I gave him life and now he has given me life.”