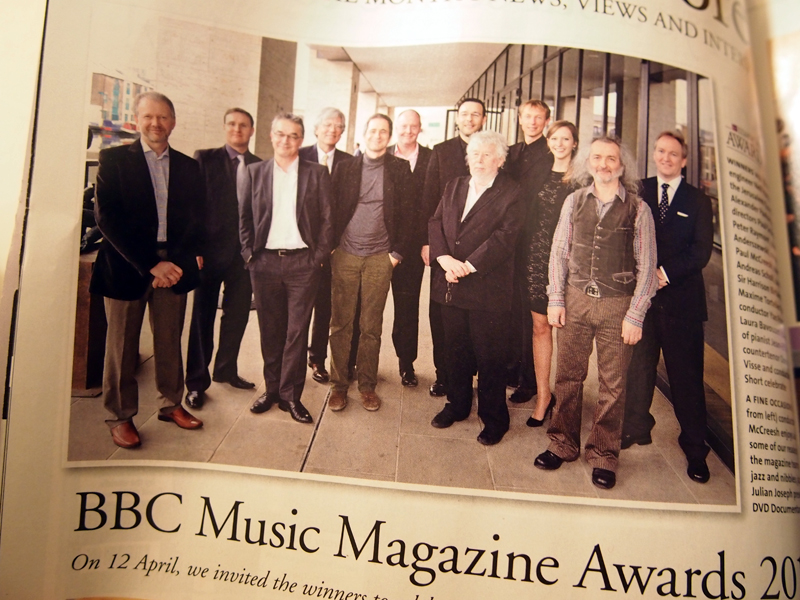 One of the most controversial posts I’ve ever written for this column was a 2010 post titled “Why we shouldn’t do a damn thing about the decline of classical music.” In a nutshell, I argued that it’s pointless to take extraordinary measures to “save” classical music from its long-term decline in popularity: as long as the field continues to define itself as music played on traditional instruments in recital halls, it’s going to become less and less relevant.

Above is a photo of the 2012 winners of the BBC Music Magazine Awards for excellence in classical music. What you see is a group of superb musicians who look pretty much exactly how you’d expect them to look. When excellence in your field largely constitutes excellence in performing music written by dead white guys, what you see is what you get.

What, if anything, is to be done about this? Surely many would argue that the best way to increase diversity among classical musicians is to increase outreach efforts and early education across the socioeconomic spectrum. That could be done, yes, but I think that’s a losing battle. Keeping Mozart relevant doesn’t mean shoehorning kids into Orchestra Hall (the BBC Music Magazine award for “Audiences and Engagement” went to a program that encourages the donation of classical tickets to first-time attenders), it means working to build connections between what we now know of as “classical music” and—well, everything else.

There are signs of hope in this department. Ensembles like the Orange Mighty Trio are exploring the territory between classical and jazz. Pop musicians like Sting and Peter Gabriel—old white guys, yes, but old white guys with Top 40 track records—are touring with orchestras playing arrangements that are complex and ambitious. Emily Wells, instead of tossing off yet another Bach record with her violin, incorporates it into looped accompaniment to soulful new songs. Acclaimed violinist Hilary Hahn is collaborating with musical experimenter Hauschka on a semi-improvised joint project.

There is, after all, precedent for this—even among classical music’s demigods. “Beethoven was probably better known as an improviser until people started paying attention to his symphonies,” pianist Christopher O’Riley told the New York Times for a 2006 article on the “classical crossover” genre. “Liszt, taking Hungarian folk songs and making them into these orchestral piano fantasies. Bartok used the raw building blocks of popular music as the way he set up major pieces of art. And then Stravinsky would lift them whole cloth.”

It’s telling that Philip Glass, one of the most popular composers of the 20th century, was also one of the most adventurous: having studied in the classical mode with legendary teacher Nadia Boulanger, he tore his practice apart and rebuilt it from its foundations incorporating what he’d learned about non-Western music by working with sitarist Ravi Shankar. Subsequently, he’s collaborated with everyone from pop stars to indigenous ensembles. That’s what the future of classical music looks like. The sooner the field embraces that fact, the sooner it will stop having to publish embarassing photos like this one.