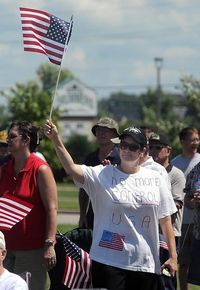 A friend from Southern Minnesota reports that about 150 people attended the Tea Party in North Mankato Saturday afternoon. She noted that Randy Demmer was there, as was Independence Party candidate Steve Wilson.

“I want God and my country back,” read the hand-inked message on North Mankatoan Sherri Lange’s garment.

Who does she want her country back from?

“Terrorists and communists,” she said as the breeze whipped the teabags hanging from her ears.

Lange said she traces her feelings of disaffection to the day Barack Obama was elected (“I think he’s evil”) and maintains that his administration is “trying to govern every aspect of our lives.”

Nearby, retirees Thane and Bev French of St. Peter were taking in proceedings from their lawn chairs. They had a sign: “Back to our republic – down with socialism.”

Guess she got the memo on Demmer being allowed to appear to distance himself from the Tea Party on the national stage, while appearing on the stage at Tea Party rallies Southern Minnesota.

Given how easily the Tea Party crowd can be punked, Demmer’s sort of political pranksterism  probably won’t be too difficult to pull off, however momentarily miffed Maves might be at Randy’s latent RINO tendencies.