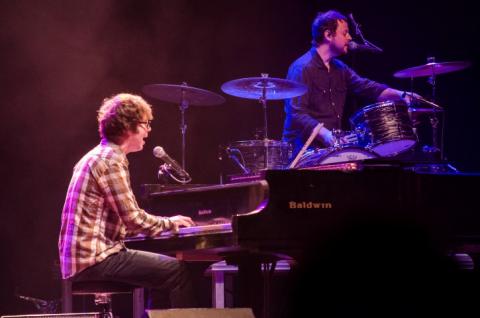 I’ve been catching live music for ages—almost, it seems, since the invention of dirt—and every once in a great while things turn upside down with the opener outdoing the headliner. For instance, way back when the Schaeffer Music Festival in NYC’s Central Park used to be held at the Wollman Skating Rink, Led Zeppelin couldn’t even get on the stage because the their sold-out audience kept calling B.B. King back on stage time and time again.  And this was before he had his breakthrough hit “The Thrill Is Gone,” when to a lot of white folk he was practically an unknown.

It was also before the day of automatic encores—if you didn’t have killer chops that particular the crowd simply, got up and went home.  There was no Pavlovian conditioning to manipulate them into bringing you back on andnot leaving after the house lights came up. Hell, for one Jefferson Airplane show at the Fillmore East, every time the lights were brought up, the audience kept bringing the house down and just refused to leave. Rock impresario Bill Graham, at 4 a.m. or more, had to declare the show a private party because it had gone past the legal time limit. By the time we got out of there, drummer Spencer Dryden had been worn out, and some lucky stage hand filled in for the absolutely last number, a second run-through of “Other Side of This Life,” and it was actually daylight outside.

But I digress. Years later, I was in college when pop legends Chicago came through. Newcomers the Allman Brothers played first, and halfway through Chicago’s set the chanting began. “Allmans! Allmans! Allmans!” It got so bad that the band walked off in disgust and, to the throng’s maniacal delight, the Allman Brothers came back on and played some more. Then, played some more after that. In all fairness to Chicago, it was hardly a stroke of genius to have straight-laced Top 40 hit-makers follow counter-culture heroes in the making before a SUNY at Stony Brook University mob of youngsters who toed the academic line during the day and, then, when classes let out, morphed into pot-smoking rebels revolting against the establishment (all on their parents’ dime).

I haven’t seen anything like those two shows since. But a while back, teenaged blues upstart Quinn Sullivan took the State Theatre stage to warm the place up for Buddy Guy. While there was no impromptu uprising, the kid clearly outdid the old master. Not that anyone except a certain chronically outspoken critic was going to say so.

Anyway, after literally decades, I had quite the unexpected experience of about twice in about a week and half seeing the opener outclass the act everyone had come to see. September 20th at the State, Atlas Genius handily outshone both School of Seven Bells and Silversun Pickups. Then, on the 29th, at a Ben Folds Five show, opener Kate Miller-Heidke made true magic, followed by Folds and friends turning in one of the weakest hour-and-a-half torture sessions I’ve ever had to sit through. To my recollection only Brian Wilson’s sappy, god-awful self-indulgence years ago at the State tops it for unmemorable performances.

Miller-Heidke hails from Australia (by coincidence, so do Atlas Genius—makes you wonder what the music scene is up to Down Under, the land that gave the world inventive band Men At Work) and was making her Twin Cities debut. It was, as the saying goes, a smashing success. Miller-Heidke has a gorgeous voice—crystal clear with arching range—that she uses to ingenious effect. The songwriting is superb. The guitarist and accompanist setup kind of puts you in mind of Simon & Garfunkel. Except that Simon, of course, is an incredible guitarist and a pretty good vocalist. Ultimately, Miller-Heidke has strong chops, likeable stage presence, and a strong career ahead of her.

Ben Folds is an odd paradox. He’s a fine pianist, but a poor songsmith and a pitiful vocalist. The best that can be said about his highly derivative sound is that his playing apes Paul McCartney and his singing approximates John Lennon. Throughout the night, between the Beatles’ “Glass Onion,” “Julia,” and “A Day in the Life,” you had the substance of blatant, watered-down knock-offs that comprised the set.

Bottom line, look for Kate Miller-Heidke on the horizon. With the right promotion she unquestionably will be there. While you’re at it, keep an eye out for Atlas Genius. Meanwhile, it’d be a good idea, at your next concert, no matter who you shelled out your hard earned money to see, if you were to not get their fashionably late, just in time to see the star of the show. The opener just might give you a new, improved listening experience.

Photo by Ryan Cutler; click here for more photos of the Ben Folds Five at the State Theatre. Coverage of issues and events affecting Central Corridor communities is funded in part by a grant from the Central Corridor Funders Collaborative.