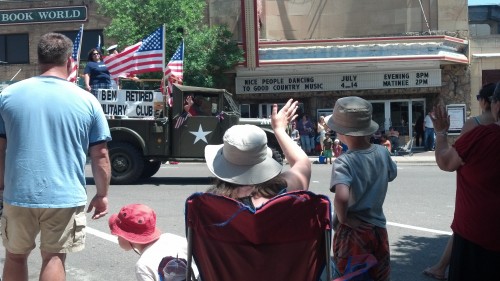 Last year my family and I extended a north woods vacation by an extra half day to take in the 4th of July parade in Bemidji, Minnesota. It was wonderful. The decorative lampposts were hung with American flags. Residents and visitors lined the sidewalks and parking lanes with foldup lawn chairs, staking the best position to view the spectacle. The high school band marched, Miss Bemidji rode by in a convertible, the car dealers drove antique cars, the Shriners drove funny little cars, and of course, fire trucks, old and new. And everyone threw candy, much to my kids’ delight. God Bless America!

I like Bemidji. I’m impressed by what they have done with their downtown. It isn’t a too-cute collection of antique stores and gift shops with the typical collectible Minnesota crap. Sure, there is a place for that and indeed some exists there, but there is more to downtown Bemidji. There is the Cabin Coffee House & Cafe where local decision-makers have meetings, live theater at the Paul Bunyan Playhouse, a baseball card shop, furniture store, Brigid’s Cross Irish Pub, a fudge shop, the great-for-kids Headwaters Science Center, a book store (called “Book Store”), and an actual, functioning Ben Franklin store. Downtown seems to play a pretty important role in the everyday life of the city, and that is saying a lot.

I like the scale Bemidji provides, for parades or any other day. The downtown core hasn’t been gutted by post World War II planning, is easily walkable within a few blocks and lined with buildings with good street presence. Prior to the parade, we found a shady on-street diagonal parking space, had a delicious pub lunch at Brigid’s Cross, set up our lawn chairs in the shade of a 100-year old mixed-use building, and ate some candy from the fudge shop while we waited for the parade to begin.

Bemidji has done a lot right with their downtown. Based on the age of shade trees and sidewalks, it appears that in about 1980 or so a decision was made to create some kind of special services district to tax downtown properties for beautification, including trees, sidewalks, planters and decorative lamp posts. It seems to have worked. Individual businesses adopt sidewalk planter boxes and keep them weeded and watered. More recently they have added public art at every corner downtown, and even a decorative bike rack. And this month a new brewpub is opening. 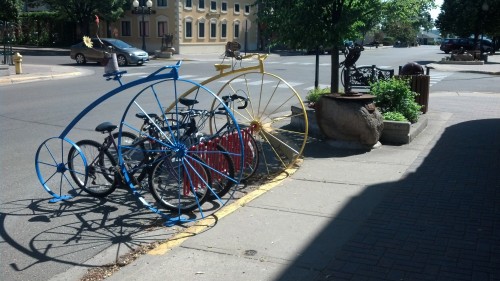 Beltrami Avenue is the central spine, or Main Street, if you will, with a very pleasant walkable district of about two blocks wide by four blocks long. Sidewalks are wide, somewhat shaded, with parallel or diagonal on-street parking, mostly pedestrian-friendly storefronts with minimal setbacks, great windows and lots of doors. All intersections in the core are four-way stop signs.

One block to the east of Beltrami Avenue is Paul Bunyan Drive and the Lake Bemidji waterfront beyond. And of course, there is Paul Bunyan and Babe the Blue Ox, there by the waterfront since 1937. But unfortunately Paul Bunyan and Babe are marooned on the other side of Paul Bunyan Drive, which is an unnecessarily wide and pedestrian-unfriendly street with very little of value fronting it, like a gas station, a lawn adjacent a bank drive-thru, and the parking lot of a vacant Pamida store. A litmus test of the quality of a place is this: if I’m walking with my two-year old and I feel compelled to hold his hand the entire time, the place is not pedestrian-friendly. And so I found myself holding Shaw’s hand the entire time we were near the fast moving Paul Bunyan Drive (but we had to go see Paul Bunyan right!? And I’m not going to park twice!), but once we passed the bank driveway, I could let go and Shaw could regain his freedom to walk unencumbered.

And so, if I were to recommend anything to Bemidji, it would be to put Paul Bunyan Drive on a road diet, reducing it to one lane in each direction and using those curb lanes for on-street parking, curb bumpouts, shade trees and essentially the same treatment as the blocks to the west. This would leverage better development and real estate value along Paul Bunyan Drive and better connect downtown to its lovely but seemingly underutilized lakefront. It would also help the neighborhoods north of downtown, uniting rather than dividing them. It is worth mentioning the effort to preserve the historic Carnegie library building, which sits smack up against Paul Bunyan Drive but on the east side of the street and separated from downtown. The sidewalk between the bottom step of the library’s front door and the street can’t be more than five feet wide – on Google Maps it looks like the building actually overhangs the street. Sidewalk widening and pedestrian improvements on Paul Bunyan Drive would help provide a better context for a future use of this building that deserves preservation. 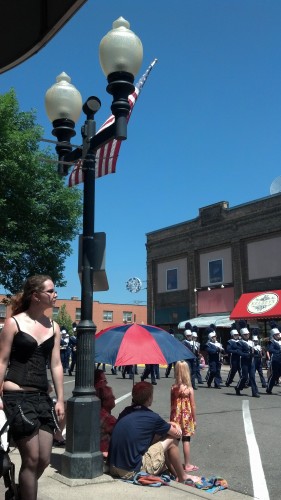 My other quibble is with Paul Bunyan Drive as it enters Bemidji from the southeast along the south shore of Lake Bemidji. There it is a set of one-way roads, divided by a narrow strip of auto-oriented commercial development. Whereas the lakefront has a nice bike and pedestrian trail, there are no crosswalks from the lakefront to businesses like Dunn Bros and Dairy Queen. One-way couplets such as these should provide an excellent opportunity for a saner, safer street, as couplets can break up the suburban arterial in to narrower, manageable streets. Not in Bemidji, where the two lanes are overly wide with too many turn lanes and not a single crosswalk. In the many hours spent at Dunn Bros., I’ve seen countless cyclists forced to make an uncomfortable crossing, which is an unfortunate oversight but also imminently fixable. Furthermore, two lakefront hotels in this section of Paul Bunyan Drive could have been built in the downtown core, like the former Pamida site (the back of which, incidentally, is on the Mississippi River), where plenty of land exists and hotel guests could more easily visit downtown businesses.

But ah, why complain? As we Minnesotans are good at saying, and truly mean, it could be worse! Well done, Bemidji! I enjoy visiting and I look forward to the new brewpub. There are a few things to work on in the long term, but clearly you have a lot in your favor based on clear efforts to improve downtown. Perhaps most importantly, downtown Bemidji has a “there” there, providing an excellent place for a 4th of July parade and a great place to gather the other 364 days of the year.