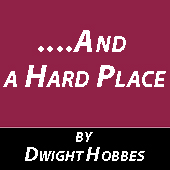 This past season, you may have walked by Willie Daniels downtown in either Minneapolis or St. Paul, ringing a Salvation Army bell in one of those Santa get-ups. You’d know if it was him or not. He’d be one of the ones who wasn’t standing there, looking bored half to death. He’d be one of a few who actually get into the act for a full eight-hour shift, singing songs (he even does impressions of Nat “King” Cole and Elvis Presley) and putting in a little sort of magic show for kids.

“I do a trick where I tell them if they fold the money a certain way and stand it up, what they’re going to do is say ‘Abacadabra.’ Then, if you whack it, it will disappear into the kettle. And that’s exactly what happens.

“So, a lot of parents will give their children money to put in the kettle. As opposed to a mother giving her child 50 cents or a quarter to throw in, she has to give them a dollar in order to have that [paper] stand up.”

This is by no means an opportunistic ploy. Daniels isn’t interested in hustling kids’ piggy banks to fill up his pot, but simply putting on his thinking cap to help folk give a little extra to a worthy cause. After all, it’s not like he gets a cut above and beyond his paycheck at the end of the day.

A retired house painter, he supplements a fixed income this way. “I also do odd jobs and things like that, mostly for friends.” In addition, he’s a careful shopper and always has an eye out for bargains, getting his groceries at an economically priced supermarket chain. 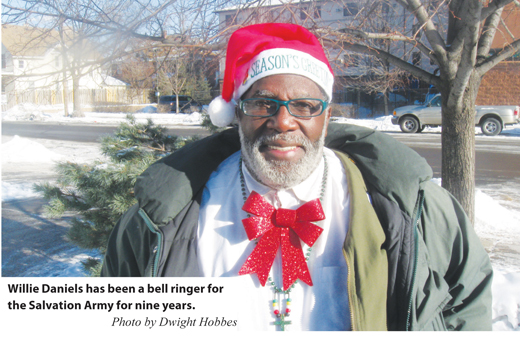 You can’t help having to ask, “Doesn’t it drive someone a little nuts, ringing that thing all day long? Don’t you start to hear bells at night when you try to sleep?”

Doesn’t bother Willie Daniels one bit. “No,” he answers with a smile. “I’ve been doing it for nine years.” He plans on doing it a 10th year and every year after that which the Good Lord provides.

“With their housing program, helping people with jobs, people who have alcohol problems, drug problems, [the Salvation Army] is there. They stand in the gap.” Sure enough the organization has an extensive range of social services program detailed online at www.sal vationarmyusa.org.

Another reason he plays Santa’s soul brother: It’s a seasonal job, Thanksgiving until Christmas, to fill in a financial blank or two. And a little more. “The extra money allows me to donate at church, help people out when they’re in need, do small acts of kindness.”

The recession naturally has hit sidewalk donations like it has everything else for those of us who are not rich. “People normally give a lot, but the economy being what it is the giving isn’t there as much anymore.”

The slack, he says, does get picked up. “A lot of the funders who give to the Salvation Army, the closer you get to Christmas, they triple [the amount that] goes into the kettle on the last three days. That’s a big help to reach goals that they have.”

Married 20 years, he and his wife Willia have been together for 45. She wanted to get hitched on her mom’s birthday but that didn’t work out. Willie got hit by a car. So, next best thing, they got married — with him on crutches — for her birthday.

“I couldn’t jump the broom,” he jokes. “So, we had to swing over it.” As celebrating two occasions at once isn’t enough, the date falls on the first day of the year.

“There’s no way I can ever forget. It works out quite well.” He laughs, recalling his brothers cautioning him, “Don’t try and be thrifty and do the Christmas, birthday and anniversary with one present. It requires all three.”