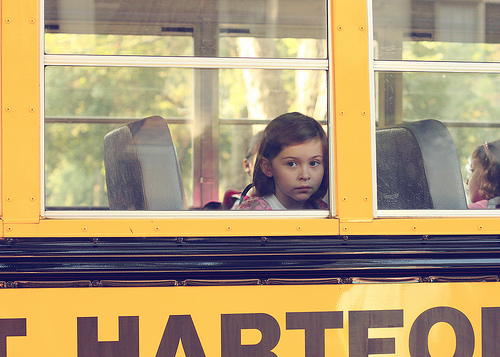 Last night I joined approximately one hundred educators and community members to watch a moving and all too real documentary, “The Bully Project” at the Twin Cities Film Fest.  The screening, which opened the non-profit festival’s phenomenal week of films at the Shops at the West End in St. Louis Park, was directed by Sundance and Emmy-award winning filmmaker, Lee Hirsch, who was in the audience to introduce the film and answer questions after the screening.

“The Bully Project” follows several families from across ethnic, cultural and geographic boundaries as they grapple with the tragedy their family has faced as a result of bullying.  Several of the families profiled in the film had lost a child because he or she became fed up with the mostly mental and sometimes physical abuse they experienced on a daily, even hourly basis at school, on the school bus, and in their communities.

The family the film followed most closely was actually in the audience, just a few feet away from me.  It was Alex’s family.  Alex, a 14-year-old from Sioux City, Iowa, is caught on film as he’s strangled, punched, and teased on the school bus, and then told by his school principals that they are already taking action, and that there’s nothing more they can do.

Director Lee Hirsch told the audience during the post-film Q & A that he, himself, had been bullied, and that was part of the inspiration for the film, and for the direction he took it.  At the after-party at Soprano’s Italian Kitchen, I snagged a moment with Lee Hirsch to talk about that bullying, and what this film has meant to him.

“I felt that the hardest part of being bullied was communicating,” Hirsch said.  ”And getting help.  I couldn’t enroll people’s support.  People would say things like ‘get over it,’ even my own father and mother.  They weren’t with me.  That was a big part of my wanting to make the film. It’s cathartic on a daily basis.  Being with these guys [he motioned to Alex’s sister, standing and talking with us], and seeing Alex shine.  That’s so rewarding.”

When I told Hirsch I wanted to interview him for TC Jewfolk he beamed.  ”Like TC Jewishfolk?  I’m Jewish, he said.  Can’t you tell by my nose?”  I laughed.  Of course I was hoping he was an MOT.  And it makes sense given the amazing work Hirsch did with The Bully Project, and his hope to use the film as a catalyst for social justice and change in communities around the world.

As Hirsch explained, “Absolutely for me, the Tikkun Olam aspect of Judaism is not a joke.  It’s the part I most connect to.  When I’m engaging in this sort of work, I feel the most Jewish.”

So what’s next for Hirsch?  For the next few months, he’ll be flying all over the world (in the next 48 hours he is traveling to Utah, Washington, DC and Zurich) to promote the film.  But he hopes the film grows far beyond him, inspiring advocacy, engagement, and empowerment not just in people who are being bullied and in their families, but by those of us who all too often stand by and do nothing.  He stated, “I hope we build something that’s really sustainable.  I hope this takes on a life of its own.”

And so it shall.  Although “The Bully Project” won’t hit Minneapolis theaters until March 9th, you can log on to http://www.thebullyproject.com/ to get help, donate, and taken action.  I’ll see you there.