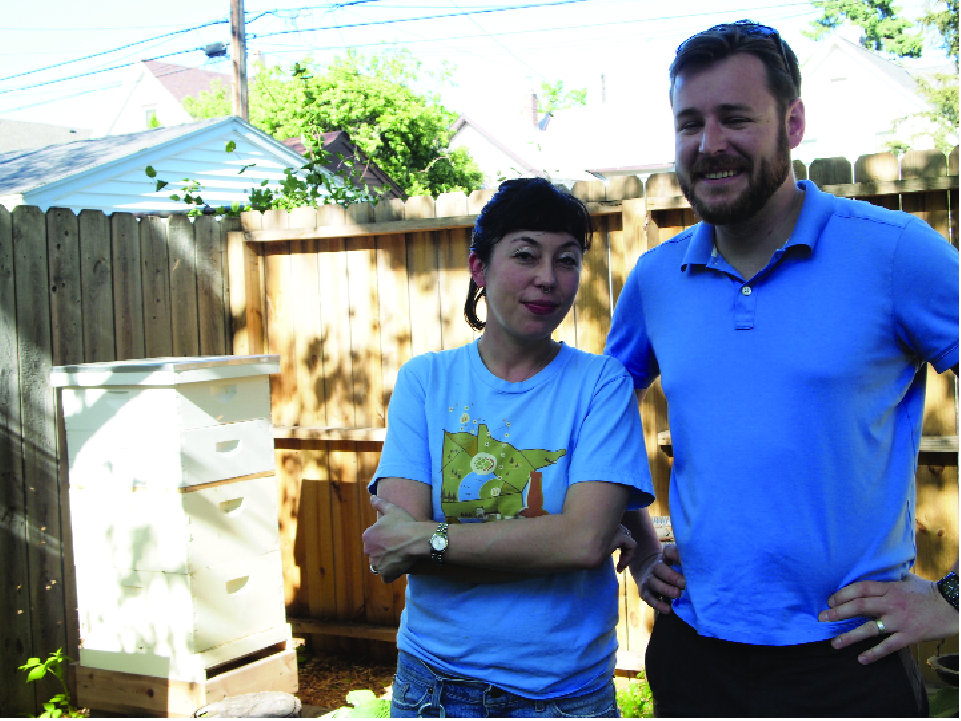 Britt Lundberg and Corey Sax with one of their hives. (Photos by Margo Ashmore)

“There’s a spiritual connection. Bees don’t exist as one bee, but as a colony,” said Bill Behrend, a retired Lutheran (ELCA) pastor who drove a box full of bees up from Georgia to help son Matt Behrend start his hive at the Gateway Gardens, southeast of University and 37th. “They are a fascinating model of efficiency,” he said, as all but the queen will cycle through “all of the jobs” in their 45-day life.

The elder Behrend came to see his new 10-week-old grandson, William Danger Behrend, and brought the bees along. Matt assents that Bill pushed him into beekeeping and Bill said he has “become single-minded about it.”

Matt explained why he and many others are paying the city of Minneapolis a $100 fee ($50 in subsequent years) and getting permission from neighbors to keep bees. Columbia Park Neighborhood Association, which maintains the Gateway Gardens, let him set up on land separate from his own garden plot. They see bees as part of their sustainable garden, where no pesticides or herbicides are allowed and plants need pollinating to form fruit, Behrend said.

Bill and Matt said worldwide, the bee population is in danger from “corporate monoculture.” On huge corporate farms there will be single crops that need pollinating. Bees are trucked in and then when their job is done they’re trucked somewhere else, very stressful on the bees. The insects are susceptible to mites (imagine carrying around a tick the size of a dinner plate, Bill said) that are more likely to bother them under these stresses, whereas without human intervention they are able to tolerate them.

So many worker bee populations have disappeared in the last five years, the phenomenon has been called “colony collapse disorder” and is thought to be caused by stress, chemicals, pathogens such as viruses, genetically modified crops, even cell phone radiation, or combinations of these.

“Urban bees have a leg up,” Matt said, “there’s no Roundup and no Bayer” (chemicals) and the gardens grow various species, providing bee food throughout the season. Those who grow gardens and “buy organic” will help the bees. The Behrends originally came from South Dakota, near Madison, where “there’s cabbage, beets, all sorts of things that bees like.”

Bees gather pollen for protein and nectar for carbohydrates. To make honey they fan the nectar with their wings until it’s only 18 percent water, Bill said. They were inspecting the new hive and would see pollen going in as a sign that there was indeed an active queen.

The box Bill brought becomes part of a Warre hive, multiple stacked boxes that encourage the bees build more combs as is their natural preference, downward from a vertical top bar. When they’ve left the older, honey-filled top boxes, those boxes are removed and new ones added at the bottom. Also known as the “Peoples’ Hive,” it was invented by Emile Warre of France (1867-1951). 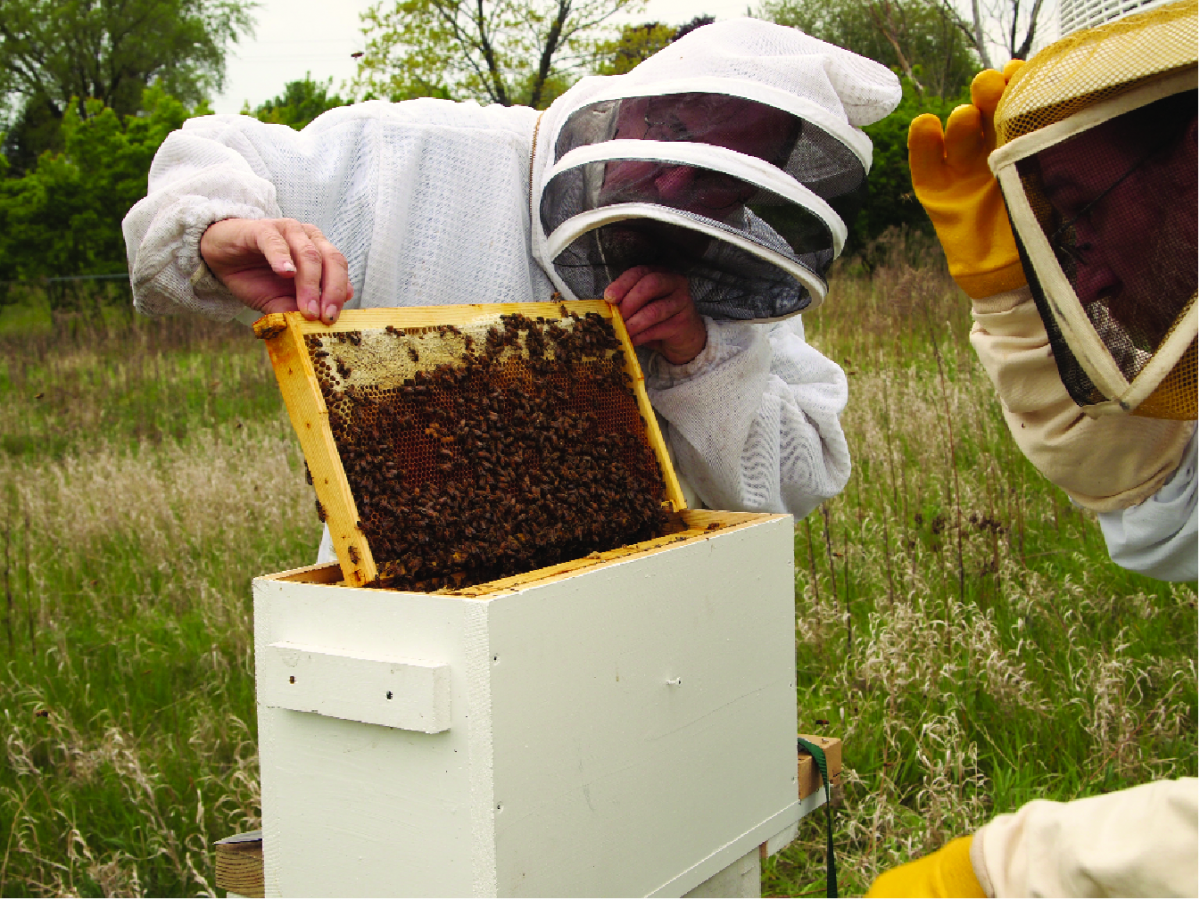 Bill Behrend looks for evidence of an active queen cell as son Matt looks on. It’s one of the few times they will open this hive which will function best undisturbed. Before opening it, they use smoke to calm the bees. 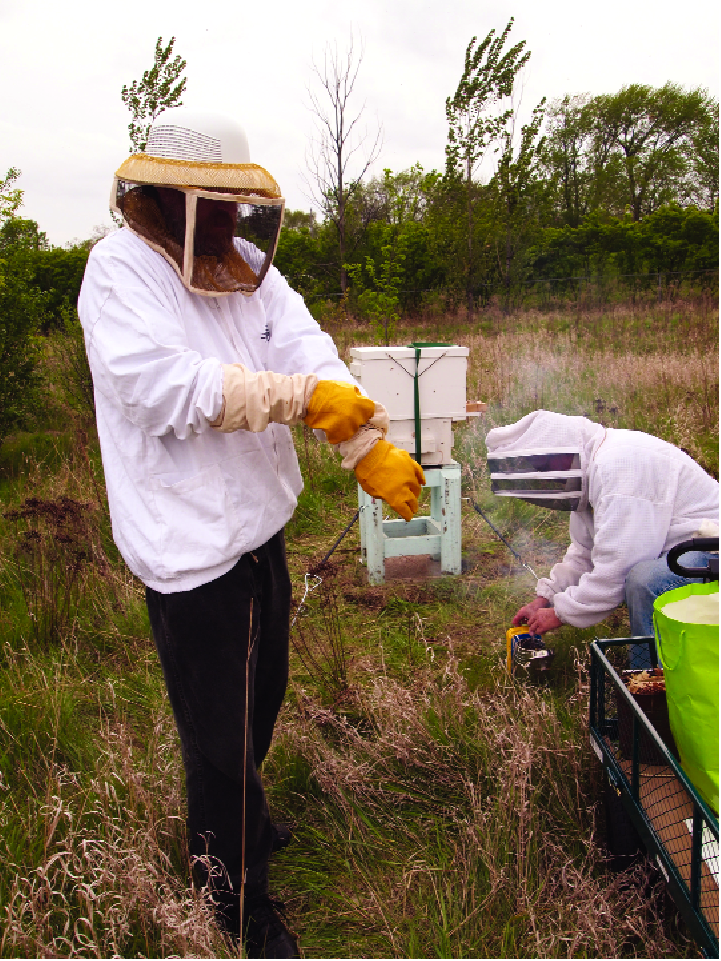 Britt Lundberg and Corey Sax of Logan Park Neighborhood use Langstroth hives, which contain frames and give the bees a start with a thin layer of beeswax foundation. This method also involves removing boxes no longer occupied by “brood” but full of honey.

They’re in their second year of bee keeping, last year produced about 50 8-ounce jars of honey; this year may yield 10 times that, as the bees have already built much of their infrastructure.

Lundberg and Sax have a strain of bees developed at the University of Minnesota called “hygienic” because they do a good job of removing infected larvae before they can transmit diseases to other larvae.

They got interested when visiting the Agriculture building at the State Fair and then took an extension course at the University of Minnesota. “Sixteen hours over two days. It’s fascinating what these guys—or actually, gals—can do,” Lundberg said, “90-95 percent of the bees are females. They’re so healthy here.”

As opposed to the monoculture in rural farms the Behrends talked about, there are endless varieties of nectar-yielding flowers within the “two mile radius” that Sax and Lundberg mention. “There are probably more beekeepers than anyone realizes,” Sax said, “We decided to go legit,” getting permission from the required number of neighbors.

“It really brought our block together,” Lundberg said, and Sax echoed, “Everyone feels they have a stake in the bees. After nine years of living here, it got us to know our neighbors. People wave to us as ‘the bee people.’” The couple position the hives such that the “flyway” is next to but not touching their fence; the bees fly up rather than directly in the path of people.

Sax also inspects the hives for evidence that they might “swarm”—a second queen emerges and takes half the colony with her to start a new one elsewhere in the neighborhood where unprepared residents would find them a nuisance. Sax removes any stray colony that starts building outside of the frames, a likely place for swarming behavior.

“We had a bumper crop of raspberries last year. We can really tell the difference in the garden,” Lundberg said. Their plants definitely get pollinated. “If there are more bees, everything’s better. We saw a film that showed we would lose one-third of the food supply if we lost bees.”

“In the 1950s, farms had a variety of crops and they were all organic,” Sax said. “It’s in the last 50-60 years we’ve been creating this bad situation” where half the corn grown is being used for non-food uses. “It’s not just a biological issue it’s a social justice issue. We’re letting poor people be unhealthy,” where in the past, even poor farmers usually had food to eat if nothing else.

“We all produce and consume on some level. If we can do this on a city lot, anyone can,” produce something as well as being a consumer, Sax said.

For more information on bee keeping, see www.mnbeekeepers.com. The city ordinance on bee keeping is one of the miscellaneous ordinances—”74.80 Keeping of honeybees,” and can be found on www. municode.com (search for Minneapolis, Minnesota—bee keeping). 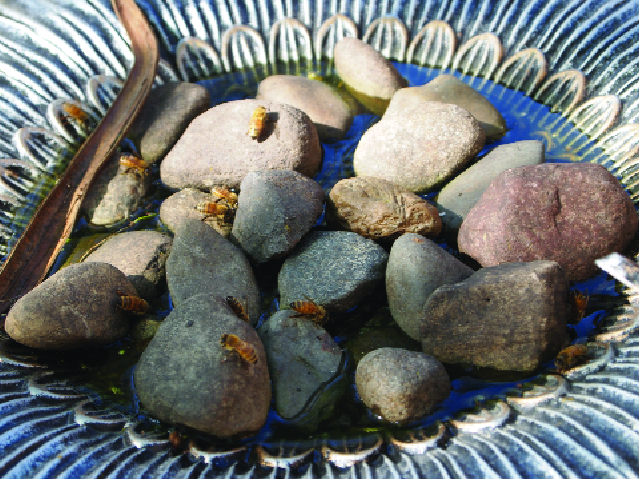 Britt Lundberg and Corey Sax have put rocks in a bird bath to give the bees something to perch on as they drink water. Below, the thimble-like dark beeswax structures are cells from which new queen bees would hatch. 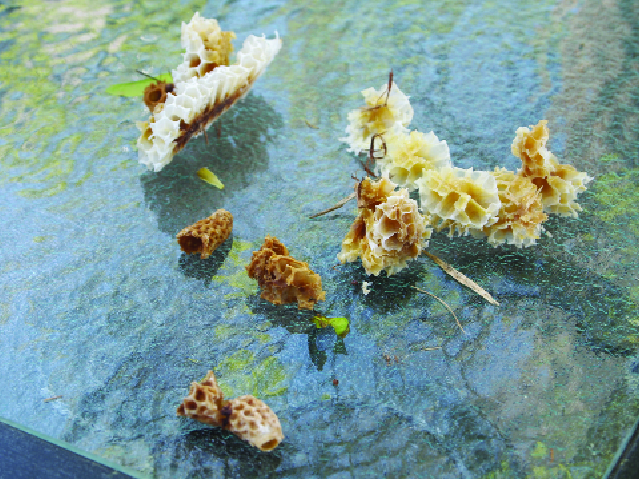