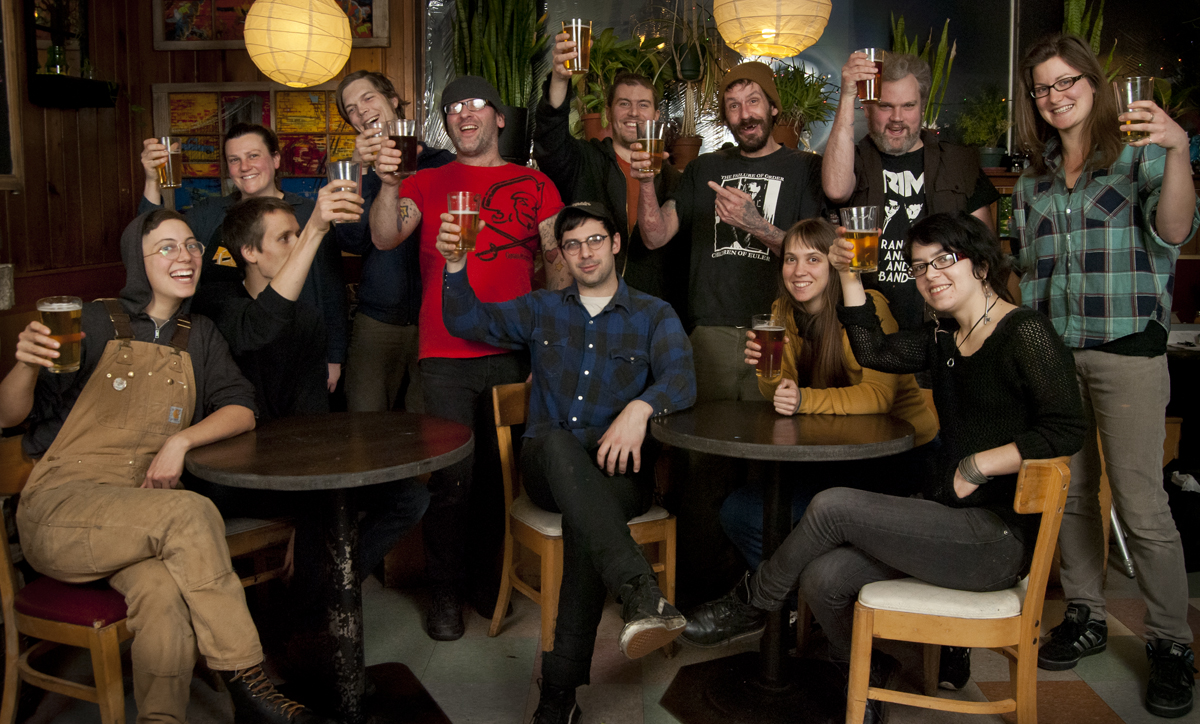 Friday, March 8 marked a new chapter for the Seward Café, one that in many ways returns it to its roots. The worker-owned, collectively-run cooperative will once again be open late into the evening. Staying true to its mission, it will begin offering more meat options, as it did in the past, and resume pouring beer and serving wine. Entertainment will be regularly featured, beginning later this month.

Radical Roots Collective member Ben Acaso says that changes were prompted by a really good summer. He chalks up the bump in business to the magic of plastic, i.e. credit cards. Acaso adds that it didn’t hurt to be named “best vegetarian” by City Pages in 2012, or that a team of food critics for Mpls.-St. Paul Magazine picked the cafe as “best breakfast joint/earthy vegetarian.”

Nils Collins, with the collective since 2001, explains that, “For years there was a small group of us pushing for credit cards, which we didn’t actually get going until 2012.” He admits, “There’s a strong Luddite philosophy in play often.” The reluctance to accept credit cards proved detrimental.

“I hate to say it, but credit cards changed everything,” Collins admits. “After credit cards were accepted we saw drastically increased sales….I see that as being the breathing room we needed to move the direction we needed.” 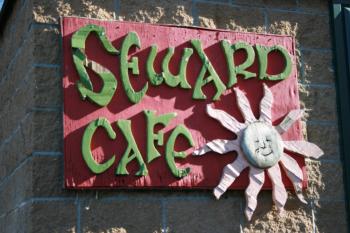 At one point Acaso, who joined the Radical Roots Collective five years ago—after several years as a cook at Byerly’s—recalls remarking that hours should be expanded. Weekends are consistently packed, he observed, because people who work 9 to 5 jobs aren’t able to stop any other time. Acaso thought that staying open a few extra hours on weekdays might be the answer.

Collins ran with that idea and started ruminating about dinner, beer, wine, music, and staying open until 10:00 or 11:00. Karaoke was even bandied about as a possibility. As a collective, Seward Café operates under a different model than most businesses, requiring decisions be agreed upon by the whole.

From crazy ideas to rezoning and licensing

Collins explains that there are 13 or 14 collective members and that all major decisions utilize a consensus process. Members can consent, stand aside—for example, if they don’t have sufficient information—or block a decision. Everyone has a voice, he says, including new people who bring their own experiences and ideas to the table.

“Sometimes, he says, “it takes a while to get things done through consensus decision-making but we come to an overall better outcome.” As business increased beginning last summer, ideas about what to do next started to flow.

“As our business increased we started to brainstorm about how we could run a better worker-owned business. We have a night every few months called a long-term planning meeting where we discuss the ‘crazy’ ideas. Solar panels, renovations and dinner, beer and wine have been discussed, but often there hasn’t been energy for extra work or effort.” The reason? “It’s harder (to make a major change) because we don’t have a boss to blame if something fails….” 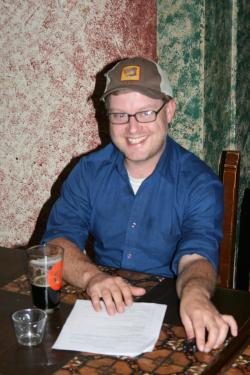 Once there was consensus, the café began jumping through various bureaucratic hoops. “We wanted to do it correctly and legally,” says Collins. “In order to do so we had to rezone commercially to provide entertainment before embarking on the alcohol license.”

The process was no piece of cake. “Though the city people I’ve worked with have been amazingly dedicated,” Collins says, “it’s been a trial dealing with the bureaucracy of the city of Minneapolis. It sometimes feels like they don’t want small businesses to expand, grow or prosper while large corporations are catered to, like the Block E disaster.” Collins adds, “The fees have been exorbitant, and the convoluted, dated system of licensing should definitely be addressed.”

All of that out of the way, the cafe is gearing up to do some of the things it did in its early years—and to venture in new directions.

A return to Seward Café’s roots

In 1974, when the Sunshine Collective–the original group–purchased the narrow corner building formerly occupied by the Fireside Inn, a  3.2 joint, it inherited beer taps. This was long before Summit or Surly, so options included Pabst Blue Ribbon and Olympia beers.

Ten years later, with the café’s identity firmly established as a breakfast place—the Earth Breakfast its signature dish—the Sunshine Collective decided to stop serving beer altogether. For a brief period, in the early 2000s when Spokes Pizza Collective worked out of the Seward Café during evening hours, steps were taken to secure a beer and wine license once again, “but the space and timing weren’t right,” Collins says.

Lots has changed since that time.

Beginning in the late ‘90s, better business practices were established to ensure the café’s survival. It reincorporated as a Class C corporation in 2001 and 2002. Along with new business practices, came physical improvements and more attention to customer service. Yet, breakfast remained the focus, with the café closing at 3:00 on weekdays, 4:00 on weekends. 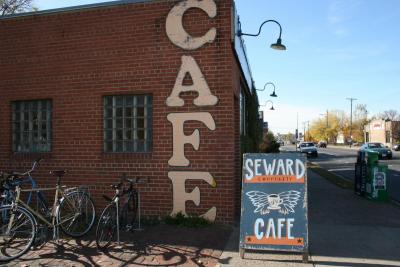 Also remaining a constant, especially in recent years, is the focus on vegetarian and vegan fare. In fact, one needs to look long and hard to spot the sole meat item on Seward Café’s menu. (It’s the pork sausage.) Therefore, it may come as a surprise that offering meat was something that the collective deliberated about from the start.

With decision-making by consensus, the original collective chose to offer meat options, distinguishing Seward Cafe from the New Riverside Café on the West Bank. The thinking, says Collins, was that Seward Cafe was more likely to introduce the merits of a vegetarian or less meat-based diet to carnivores if there were some meat items to bring them in the door. It’s even in the mission statement that the café not be strictly vegetarian.

Evenings at Seward Café, what to expect

What should patrons expect to find beginning this month? Dinner menus will come out after 5:00 p.m. each day—except for Tuesdays when the café will now be closed. The menu will remain heavy on vegetarian and vegan items. What meat is offered will be locally sourced, organic, and free-range.

After much deliberation, the café decided to bring back and make the café a place where meat and non-meat-eaters could share a pint and hear a band without getting hungry.–Seward Café press release

Acaso, a vegan, is happy to report that the new and improved menu will not be so soy-based. “There is so much great food that is naturally vegan and not tofu/soy based. We shouldn’t have to process soybeans into things resembling animal products.”

A menu preview reveals two in-house veggie burgers. There’s the Minnesota, made with wild rice, and the Wizard Burger, made of mung beans. Other items include vegetarian tacos, Seward’s Torta, a seasonal stirfry, and a tempeh gyro. But there’s also an organic brat and a barbecue pulled pork sandwich. Seward Café will sport a kid’s menu and a late night menu, too. The kitchen will likely remain open until 10:00 p.m. on weeknights, 11:00 p.m. on Fridays and Saturdays.

Happy hours will take place from 3:00 to 6:00 p.m. You’ll find Summit EPA, IPA, and New Belgium 1554 on tap, along with Crispin Cider. Also Hamms tall boy cans, “for the thrifty beer drinker.” The wine menu will feature organic options. The café does not plan on serving alcohol at breakfast or lunch, part of a desire to “maintain the cozy neighborhood feel.”

The first shows, booked for March 21and March 22, are a punk band and an acoustic folk group. To make room for a stage, seating in the main dining room will be rearranged. Hiring is taking place to accommodate the new schedule, with more senior staff launching the evening shift.

Patricia Mack, a long-time Seward neighborhood resident, is enthusiastic about the expanded hours—and other changes. “Since I have pretty much moved my lunch and breakfast gatherings to the Seward Cafe from other popular Seward venues which are too loud, I am thrilled to also be able to eat dinner there. With wine!”

Oh, and one fairly recent change you may have missed: The Seward Café now offers free wi-fi.