The local theater community has been aghast since the Star Tribune broke the story about Bedlam Theatre losing its space: a social hub for theater, music, and dancing, as well as a community resource center with youth programs that serve the residents of the West Bank. I’ve been a fan of Bedlam ever since I saw my first Romp there in 1999. To understand Bedlam’s current situation and future plans, it’s important to understand the company’s remarkable—and sometimes turbulent—history.

In 1993, a dozen or so Macalester grads started putting on shows around town. Those dozen artists, who included current Bedlam directors John Bueche and Maren Ward, put on plays and cabarets at the Red Eye, the Loring Playhouse, the Seward Cafe, and elsewhere. “We cranked them out,” executive artistic director Bueche said. “It made sense to do our thing.”

Maren Ward—now Bedlam’s producing artistic director—said that the troupe was driven mostly by a desire to create plays. At the time, they weren’t able to find many opportunities working for small theater companies, so they just put shows on themselves.

“At the time we talked about theater of the imagination,” Bueche said. “More imagination than magic.” The artists wanted to expose the process of making theater, so that the audience could understand and become a part of that process. “We were mainly trying to suggest imaginary worlds for the audience,” Bueche said.

In the mid-1990s, Ward was living in the West Bank neighborhood and working at the Seward Cafe, and was starting to be involved in the activist community surrounding operations like the Seward Cafe and the West Bank’s Hard Times Cafe. She became more and more involved with that community, and wanted her theater company to find a home in the Cedar-Riverside neighborhood.

It was that year that Bedlam found a permanent home—initially just as a rehearsal space—at 504 Cedar Avenue. “We viewed our first rehearsal space as a community space,” Bueche said. “We were making theater 24/7.” The space became the central hub of a lifestyle of theater making, although as Bueche points out, they didn’t actually produce any shows at that time. “It was this wacky creative world,” he said. “It was sort of like being at a show if you dropped in.”

In the late 90s, Bedlam started holding Romps in the space. These cabaret events would sometimes be advertised, sometimes not. “All we had to do was decide when it was going to be, and it would just happen,” Bueche said. “They would completely sell out.”

During that period between 1996 and 2000, people were working on bicycles in the space and a number of activist groups used the space as a venue for meetings. As a result of the collaboration between Bedlam and these activist groups, Bueche said, “the demonstrations around town got more exciting for a period.”

“It became a new thing,” Ward said of the space. “The new thing was a community space.”

After the first four years in their old space, Bueche said that the Bedlam theater artists were anxious to start doing plays again, and were contemplating abandoning the rehearsal space to become more mobile. “We thought, we’ll get rid of the space so we can get back to the shows all the time,” Bueche said. But at that suggestion, there was an outcry from the community that had developed around the space.

“We heard loud and clear from the community: ‘You guys don’t get it.'” Bueche said this controversy helped inspire Bedlam to develop the vision that drives the company today: answering both artistic impulses and community needs.

In 2001, Bedlam leased the space as a venue, and started doing more shows. Because the space was so large, they could experiment a lot with ambitious sets and spectacle events.

Slowly, the ragtag group started to develop infrastructure and organization. Though they had been a nonprofit since 1994, they started to acquire grants along the way, and develop an increasingly formal structure.

In 2002, the company first had the idea to create a play called West Bank Story, which was originally supposed to be a satire about the antagonism between the University and the Hard Times bike club. The idea remained on the docket for several years until about 2005, when Bedlam finally decided to produce it, according to Ward.

“We decided that if we were going to do a West Bank Story,” she said, “we couldn’t ignore everything else that was going on in the neighborhood.” Specifically, Ward said the whole neighborhood had changed since Bedlam’s arrival with a significant influx of Somali refugees.

Bedlam then began a process of meeting their neighbors, attending story circles, and establishing connections with the West Bank community. “We met tons of people,” Ward said.

Bueche said that he felt a bit like he and Ward were “cheating on the rest of Bedlam” as they were going out into the neighborhood and meeting new people and new stakeholders. He calls the experience of making West Bank Story a milestone and a turning point. “We became this other thing through that process,” he said. “We kept being a West Bank institution, but it started to make new sense, as we integrated into all of the activity of the neighborhood. It was a critical trampoline.” 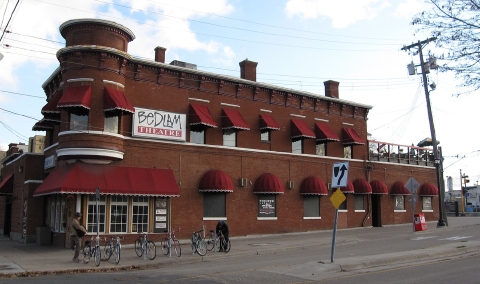 Soon after Bedlam put on West Bank Story they received notice to vacate their building. About a year earlier their old landlord, Vicki Heller, had asked them if they wanted to buy the building and at the time they didn’t feel it was the right decision. Heller then sold the building to Dar Al-Hijrah, the Islamic Civic Center that shared the building with them. The mosque was having growing pains after eight years in the space and wanted to expand, according to Bueche.

Ward said that she remembers experiencing a similar feeling as she has now: she had a sense of mourning for the space.

Bueche said that Jack Reuler, artistic director of the nearby Mixed Blood Theatre, ultimately led them to their current location, which initially was going to be a temporary location.

“We were only supposed to be there for one year initially,” Ward said. “We’ve always known it was temporary. It’s a problem that we are so wrapped up in what we were doing right now that we didn’t have time to think of the long term. We kept digging in and digging in.”

Since Bedlam moved into their current location, they’ve been growing deeper roots in the community and also further developing who they are as a company. “We’ve been asking, ‘What is everybody else doing?’” Bueche said. “It started with West Bank Story. We’ve been turning our focus outward. What are people interested in? I’m talking about the neighborhood, the city, the arts community…what fits and what doesn’t?”

Now with a full-service restaurant and bar, Bedlam also started to build on their identity as a social hub and community space. The venue grew as a bar, a happy hour spot, and a place for meetings and events. Bueche said that Bedlam made the decision not to put soundproofing between the theater and bar area because they “didn’t want to pretend it wasn’t a social hub.”

“It comes back to imagination verses magic,” he said. “We were bringing a full mix of activity to everything we do...we were making the theater experience a little more fluid.” 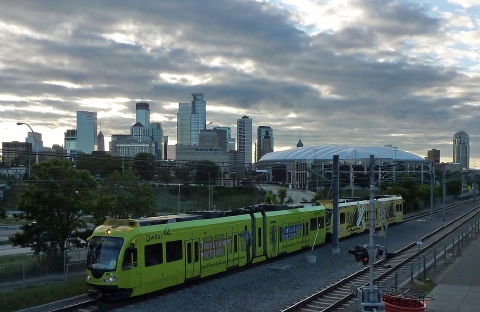 Ward said that though the current location was originally supposed to be temporary, it seemed always a possibility that the plans would change and there would be an option to stay there permanently. “Our lease always had a 60-day termination clause,” Ward said, “but we’ve been asking for more permanency since we got there. [The owners have] been resistant to that because they want to keep control.”

The location is a prime retail spot, with a panoramic view of downtown Minneapolis and convenient access to light rail. Ward said that Bedlam was expecting at some point for a new development to come, at which point they would have to move, but that they weren’t expecting to be asked to leave to make room for another tenant. Last week, Bedlam was given a termination notice.

Ward said that at times Bedlam didn’t pay rent when it was due, sometimes paying three months or even six months of back rent at once, but she said the landlord never indicated that this was a serious issue. “We have had cash flow issues,” she said. “Our statements are such that we are solvent—we are owed more money than we owe—but it’s spread out in a way that it is hard to make monthly payments.“

This spring, Bedlam was behind on rent payments when the floor collapsed in the first-story Fireplace Lounge. Bedlam volunteers excavated the site, with that labor going toward the rent.  Ward said that currently Bedlam is all paid up with their rent, and are in fact owed money by their landlord.

About having to move again, Bueche said: “It sucks. We obviously love this space, but at the same time, we move and we look for the opportunity to keep the social hub.” Bueche said he is also excited about possibly revisiting the spectacle aspect of Bedlam shows that they haven’t been able to explore in the current location. “We’ll build on the things we’ve learned in this space,” he said, “like the bar/restaurant/nighclub atmosphere.”

In terms of working with Cedar-Riverside youth, Bueche said that Bedlam’s programs would continue. “We have a solid foundation with grant support and relationships developed with [the] Brian Coyle [Center] and Mixed Blood,” he said. Bedlam’s youth programs have funding from Legacy grants through the State Arts Board, and from numerous foundations.

Ward said that she thinks it may take a few years to find a new permanent location, which may not necessarily be on the West Bank. Bedlam may be mobile for a while, she said, as they investigate the options. The experience of having had to move once before provides some insight about how to go about finding a new venue this time.

Meanwhile, Ward is mourning the loss of the place that she has called home. “Our identity is really wrapped up in the West Bank,” she said. “If we do go somewhere else, we’ll take that spirit with us. We’ll take that sense of neighborliness.” Still, though Ward is confident Bedlam will be able to dig roots and develop community wherever they end up, it won’t happen instantly. “It takes time,” she said.