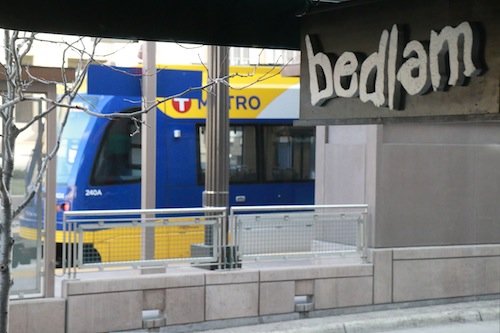 The kegs are in the cooler, the servers are trained and the fryer is ready for Bedlam Lowertown‘s Grand Opening party on Saturday, a whole day of celebrations as Bedlam officially becomes open for business as a food, drink and entertainment venue.

It’s been almost two years since Bedlam announced that it would be moving to the Lowertown space, but due to unforeseen delays with various construction projects, the theater hasn’t been able to have its official opening until now, though they’ve hosted various events in the space. With its new kitchen and its liquor licenses, the theater can now return as the social hub that its community enjoyed at its previous Cedar Riverside location, which they left in 2010.

According to Executive Artistic Director John Bueche, the Lowertown space has a full liquor license and plans to serve craft cocktails as well as a menu that includes “a few leftovers from the old space” with the addition of fried foods. Designed by Lucas Koski, Bueche said the menu can be described as “down to earth, local, and from scratch.”

In addition to being a hangout spot that’s open daily from 11 a.m.- 2 a.m., Bueche said Bedlam also has performances planned throughout the summer. It will host events during the Twin Cities Hot Summer Jazz Festival, for example, and on June 13, Ryan Underbakke’s The Beast will premiere at the theater.

Meanwhile, Bedlam plans to continue the roaming presence it has established in the last four years with an all night dance party later this summer at Kim Bartmann’s new space (where Nick and Eddie used to be in Minneapolis), and Bueche said he hopes Bedlam will continue to nurture partnerships with organizations such as Intermedia, In the Heart of the Beast, Mixed Blood, etc.

As for the Lowertown space (213 East Fourth St., St. Paul), “It feels very good to add the hospitality and refreshments back into it,” Bueche said.

At 6 p.m., Mayor Chris Coleman will be present for the official opening ceremony, followed by performances by New Native Theater, Four Humors, Dangerous Productions, Hijack and more, hosted by Maren Ward and Jon Mac Cole from 7-9 p.m. From there, Bands Prophets of Peace and Sex Rays will play until midnight, followed by dancing with DJ Miguel Vargas, the Program Director for KFAI, which is sponsoring the event.