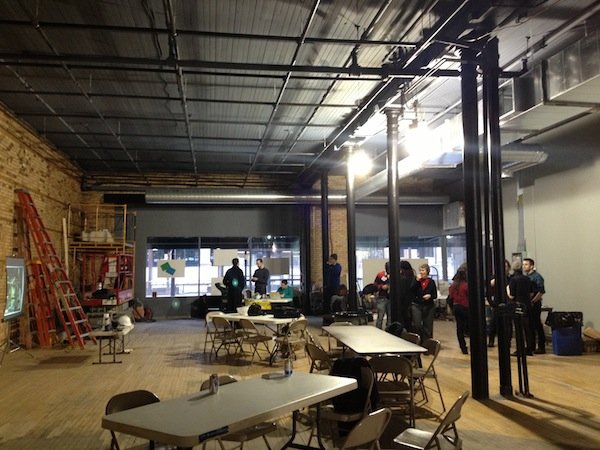 It’s been nearly two years since Bedlam Theatre moved into its Lowertown location, and after all this time, the theater company is finally getting ready to finally officially open. A series of unforeseen problems, such as a broken HVAC system, and a gap in funding, held up the construction schedule. Bedlam will present its first production in the space in March, when Morgan Thorson performs a new piece called YOU, followed by a series of soft openings through April for the restaurant and bar.

Bedlam ended up in Lowertown due to a series of events, starting with the company losing its West Bank space in 2010. At the time, the theater also had a bar and restaurant, and hosted frequent dance parties and other events. Back then, Bedlam earned three-quarters of its income from the bar, according to Executive Director John Bueche, and had become a nationally recognized model of an arts organization.

New to Bedlam? This is their self-description, taken from the website: Bedlam is your average, one-of-a-kind, classic, iconic, irrational theatre company based in the Twin Cities of Minnesota. In Bedlam venues (Bedlam Lowertown and the Bedlam Community Design Center) and Anywhere (um… Bedlam Anywhere), Bedlam’s mission is to produce radical works of theatre with a focus on collaboration and a unique blend of professional and community art. Fun, wild, anything-is-possible theater is our passion.

“The mayor threw us a party with the landlord to get us interested in the space,” Bueche said. “It seemed like it could be quick, even though it wasn’t quick.” While Bedlam wasn’t responsible for paying for the HVAC repairs, it did cause delays in the improvements the theater wanted to do, such as putting in a kitchen.

Still, plenty of support has come from Saint Paul-based groups, from the Lowertown Future Fund, to the STAR grant, and MN Philanthropy Partners.

According to Bueche, Bedlam has raised one million dollars for its Lowertown Space, but still needs another million to finish the renovations. They’ve launched a capital campaign, hoping to raise $300,000 in individual donations.

According to Tom Lloyd, a Bedlam artist who now runs the individual donations drive, while it’s great to get money from grants, they usually limit what you can spend the money on. “Grants are really good but we can’t do everything we need to do just from the grants,’ he said. The company plans to take on a membership model, much like MPR. Membership runs $20 or four hours of voluntering a month, which gets people happy hour prices any time, discounted tickets on shows and “exclusive member invitations.”

While sometimes it may look like not much is happening, Bueche said that actually Bedlam has been quite busy. Bedlam worked with 1500 artists and participated in 27 different spaces during 2013, he said at a presentation last week. Since participating in Northern Spark last summer, they’ve partnered with the St. Paul Art Crawl, and taken on supporting roles with various productions over the last year in the Twin Cities. They continue to expand their 10 Minute Play Festival, which now takes place at multiple times per year, and put on a huge theatrical party for New Year’s Eve.

Currently Bedlam has about 12 staff members, some of whom are part time. “I’m optimistic about 2014,” Bueche said. “In the last three or four years, we’ve had the chance to reboot.”