People say it was a bad year for tomatoes: too hot, too wet, too dry, too I don’t know what-all. For some people, a bad year means they didn’t get even one measly tomato out of their three scraggly plants; for other people, it means they only got 1800 pounds of tomatoes out of their 400 plants instead of the 2000 they get in a good year. Such a person as the latter is Mary Maier-Abel, who grows heirloom tomatoes with her husband Steve on a farm near Plum City, Wisconsin, called Blooming Hill Farm.

Despite the summer’s tomato-oppressing weather, Mary and Steve held their annual heirloom tomato tasting last week at the Maiden Rock Winery and Cidery in Maiden Rock, Wisconsin. Visitors paid five bucks and got a little plate and some saltines, as a palate cleanser. Then we helped ourselves to chunks of around 45 different varieties of heirloom tomatoes. 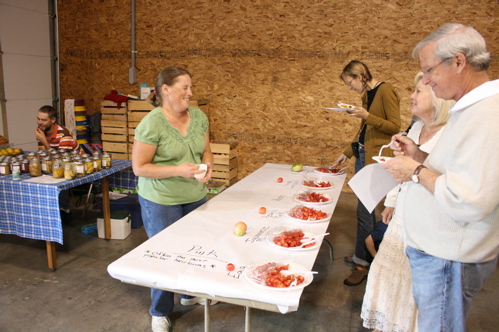 Mary Maier-Abel explains the tomatoes; her husband Steve hawks their other products at the table behind her

“Heirloom” things are very fashionable these days, as you know if you’ve been to a farmers’ market or paid attention to anything anywhere. Technically, heirloom vegetables are old, open-pollinated cultivars. Observationally, heirloom tomatoes are the gnarly ones that aren’t as regular as the assembly-line spheres to which mass farm production has encouraged us to become accustomed. Heirlooms are grown by people who prefer organic gardening, are nostalgic for the juicy tomatoes of yesteryear, and generally live exemplary lives in every respect. 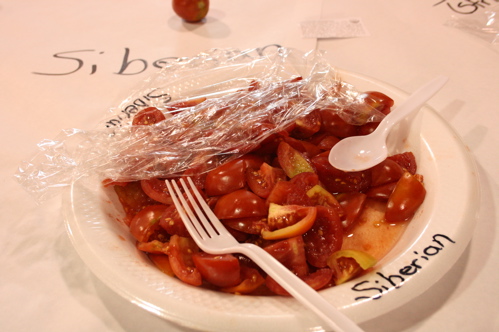 It was the tenth or eleventh year of the tasting event, no one can remember for sure, and it was declared to be the last, unless someone else takes up the mantle. “It’s a lot of work, and we’ve got big changes coming in our lives, so something’s gotta go,” says Mary. She’s been doing it since 2006; before that, Ruth Viste, another green thumb in the area, started and maintained the tradition. 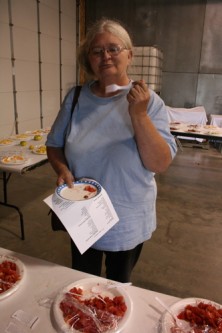 The idea is that because there are so many varieties of these heavenly fruits, with names that are eccentric and not particularly descriptive, it’s nice to have a tasting so you can decide what kinds you want to buy or grow.

The aforementioned big changes in store for the Maier-Abel family are these: they’re taking over Steve’s 126-acre family farm, which they’re converting to production of organic sunflowers and low-input corn. Mary already homeschools, or rather “unschools,” their two special-needs teenagers, having made herself an expert in the unschooling movement. They’re set to adopt a special-needs three-year-old, too. Mary serves on the board of WestCAP, a western Wisconsin community action organization that supports rural low-income families. I know what you’re thinking: what does she do with all her free time? Among other things, she makes and markets gourmet jams and pickles from their organic produce. 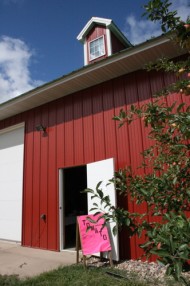 ﻿
As with any kind of tasting event, you have to pay close attention or it’s all a blur. You might assume that blurriness is a problem more common to wine-tasting than tomato-tasting. But guess what they hold concurrently with the tomato binge at Maiden Rock Winery & Cidery? Yes, a wine-tasting. I’m sure you’ve read about proprietors Herdie and Carol, with their wind-swept orchard and killer cider, so I won’t belabor it here: just make sure you go there this fall sometime, maybe even for their cider fest on September 24th. 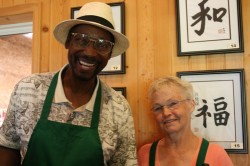 Herdie and Carol, right, will pour you a taste whenever you stop by

The tomatoes we tasted were wonderful, of course, and very heirloom-y, i.e., not boring or insipid. Mary orders her seeds from the Seed Savers catalog and starts them under a grow-light. She’s tried hundreds of different kinds; now that she’s planning to cut back, she’s only going to grow her favorites. Here they are: Cherokee Purple, Green Zebra, Dr. Wyche’s Yellow, Mortgage Lifter, German Lunchbox, Rose, Jaune Flamme, one of the big bi-color beefsteaks like Pineapple or Gold Medal, Ananas Noire, Siberian, and Sprite or Cherry Roma. 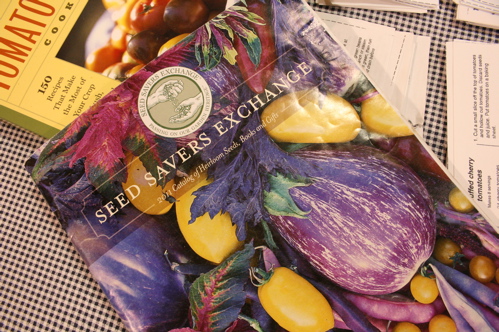 ﻿
You see what I mean about eccentric names. According to tomato maven Ruth Viste, people who send their seeds to Seed Savers can name their tomatoes whatever they want. “Mortgage Lifter” got its name from a Depression-era mechanic named Radiator Charlie, who developed a mega-tomato to pay off, of course, his mortgage. Ruth handed us a beautiful, gigantic yellow tomato she grew called “Kellogg’s Breakfast” — named by Darrell Kellogg of Michigan, no relation. 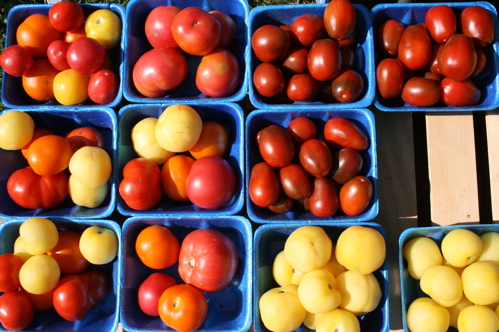 Let’s say you fall victim to the beauty of the ugly and lug home a bag. What are you going to do with them when you tire of tearing into them as if they were juice-laden, seed-dripping apples? Mary and family favor broiling: Halve the tomatoes and cover them with grated Parmesan, salt, pepper, and chopped fresh basil; put them under the broiler just until the cheese melts. Salsa uses up a lot of tomatoes, too. Caprese salad is another favorite. Really, what dish wouldn’t benefit from an heirloom tomato or two? 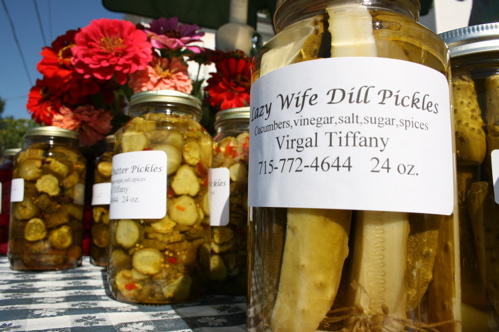 If no one decides to revive the tomato tasting next year, don’t despair: you can find Blooming Hill Farm’s tomatoes at the Maiden Rock farmers’ market and other markets within an hour or so of the Twin Cities. The Maiden Rock farmers’ market is teeny, but it has the advantage of offering pickles made by a venerable farm woman named Virgal Tiffany, who contrarily names her product “Lazy Wife,” and of being situated next to the Smiling Pelican, one of the most accomplished bakeries on either side of the Mississippi. 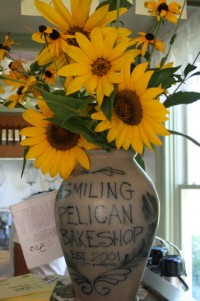 Maybe you’ll become so enamored of the heirlooms that you’ll take up the mantle yourself. Ruth Viste mentioned that she might consider doing it again if she had some help…so….if you’re thinking about it, let me know. I can hook you up.

What follows is some advice from Mary Maier-Abel about how to grow fabulous tomatoes. If you’re the kind of person who runs screaming when people start talking about gardening, go ahead and sign off now. If you can’t get enough tomato advice, read on. Mary sez: 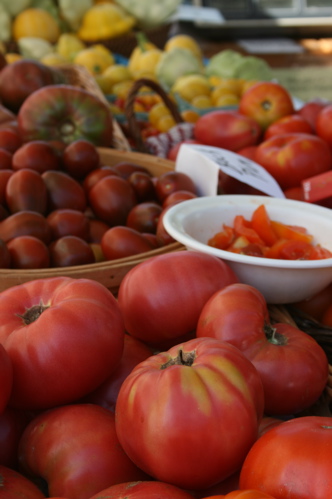 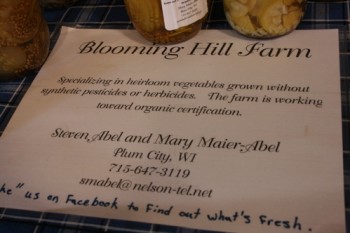