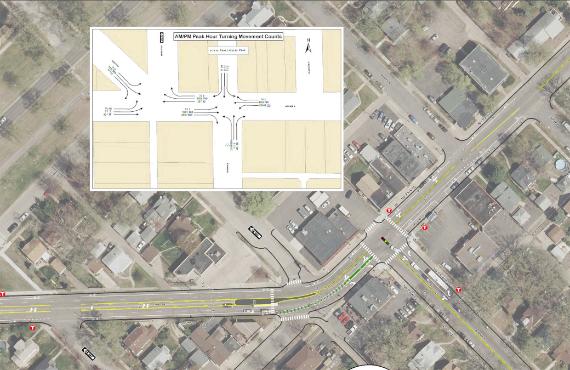 Adding to all the confusion is the closing of 45th Avenue from Osseo Road to Upton Avenue, where along Victory Memorial Drive Centerpoint Energy is installing a new gas main. Another important project, but it makes it very difficult to get around in the area. Both of these projects are scheduled to be completed by mid-September, just in time for Hennepin County to begin a mill and overlay project on Osseo Road.

The Victory Neighborhood Association (ViNA) has been advocating for improvements and enhancements to Osseo Road and the 44th/Penn/Osseo Road intersection to calm the traffic and enhance the pedestrian experience. It looks like some of those improvements may be coming soon. On October 15, 2012 Transit for Livable Communities (TLC) presented ViNA several options for a re-design of the intersection. After reviewing all of the residents’ comments TLC submitted their final recommendations for the re-design to the City and County. The City Public Works Departments and the County Works together decided that some of the recommendations could be incorporated into an already scheduled mill and overlay project. After several presentations at ViNA meetings and meeting with residents at the ice cream social the final plan for this project was developed by the county and city.

The project area begins at 47th Avenue (the southern end of the railroad overpass) and continues through the intersection and on 44th to Oliver Avenue. Beginning in mid to late September Hennepin County will mill up the asphalt and lay down a new layer of asphalt. Changes that will occur along with this mill and overlay project are:

The road way will be restriped to reduce the number of lanes on Osseo Road (from 47th Ave. N to 44th Ave. N) to one in each direction with a center turn lane. There will be 5 ft. wide shoulders on Osseo Road allowing for bicyclists and bus stops. (County)

After the curve at 44th the roadway opens up to two lanes with one lane going east on 44th and the other for right turns going south onto Penn. A bike lane will be between the two lanes for bicyclists who wish to continue east on 44th Avenue. (County)

The #19 bus stop on the southwest side of Osseo Road at 44th will be moved around the corner on Penn just south of 44th Ave N. (Metro Transit)

Only the traffic signals at 44th and Penn will remain, controlling traffic in all four directions and with marked crosswalks across all four streets. (City)

All of these changes will definitely change traffic patterns. Drivers heading west on 44th will no longer be able to continue west on 44th past Penn but will have to curve right onto Osseo Road. Heading east on 44th drivers will not have a signal at Osseo road but will have to merge into traffic from Osseo Road. Travelers going south(east) on Osseo Road will no longer be able to make a left turn onto the south leg of Penn Avenue. All of these changes should be completed by the middle of October – except that we have just learned the city may not construct the median until next spring. However the area for the median will be marked and traffic should follow the lane markings and drive as though the median were there. All in all if you have not found an alternate route that avoids Osseo Road and the intersection this summer, perhaps it would be a good idea to use one – at least until all this work in the road way is completed.