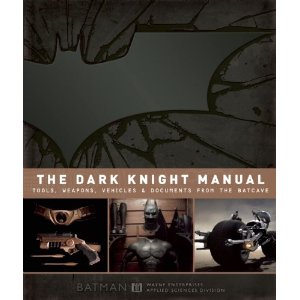 In time for the release of Dark Knight Rises, Insight Editions has come out with two Batman-related tomes to satiate the hungry Batnerd’s appetite for detail. Batmobile: The Complete History and The Dark Knight Manual function very differently, and it’s a matter of breadth versus depth. The former digs through the archives to access the long history of Batman’s sweet ride, and the latter opens up the secrets, case files, and technological wonders hidden in the Batcave.

Batmobile started out as a sincerely fascinating exploration of the earliest years of the Batmobile, from the early 1940s red convertible that definitely couldn’t crush a series of cars in front of it, to the angular stylized beauty in which Adam West tootled around in the 60s. But its exploration of the Batman canon takes an abrupt halt there, focusing only on the films from then on out. There are some fascinating and self-referential renderings of the Batmobile in the DC comics in the 80s and beyond, but aside from two or three images and short captions, a discussion of them is completely evaded. For example, in 2009’s Whatever Happened to the Caped Crusader, written by Neil Gaiman and illustrated by Andy Kubert, the Batmobile depicted in a memory Batman has of his lair is practically identical to the vehicle from the early television series, and this was a very deliberate decision in a comic that adopts a meta look at the Batman franchise. An exploration of some of the more brooding and memorable Batmobiles in print would have added much-needed richness to a screen dominated book.

Batmobile states, on the inside cover, that it pays “special attention…to Nolan’s Tumbler,” and that’s quite an understatement. It’s as if Christopher Nolan’s Tumbler (not to be confused with his Tumblr, on which he posts gifs of Leo DiCaprio discovering himself in a mirror, Leo playing with a paper bag, Leo riding around on a Roomba, Leo pretty much just doing things that cats do) was the pinnacle of Batmobile achievement, the prophesized Platonic essence of bat transport finally perfected after decades of automobile tomfoolery.

Don’t get me wrong. As a franchise fan, watching the Batmobile evolve over the years into the svelte Tumbler was really satisfying. You remember the opening credits for the last season of Roseanne? In the middle of the traditional Roseanne Face Morph she was unkempt and kind of scary and made you go “woah, what?” but in late seasons she sort of thinned out and did her hair and you went “Alright, Roseanne! Good for you!” Well that wasn’t nearly as fulfilling, but it’s generally the same idea. But the fact is, author Mark Cotta Vaz completely ignored decades of Batmobiles in comic form after the 1950s and almost exclusively favored the Tumbler, proving that this book was first and foremost intended to be a movie tie-in prior to the final Dark Knight film, rather than an actual “Complete History,” which irked me. (Not to mention, in perhaps the grossest oversight of all, the Batman the Animated Series mobile, which was positively smoldering.)

In a strange turn of events, I ended up appreciating the overt movie tie-in book much more than the purported history, because anybody who’s anybody in the world of Batman fandom definitely wants to see blueprint schematics of the grappling gun. In a delightfully sincere effort toward universe building, The Dark Knight Manual appears to be precisely that: a manual. Case files with photos of friends and foes, sticky notes from Lucius Fox and Alfred keeping Bruce Wayne up-to-date, even a collection of Joker playing cards in evidence envelopes fill the pages of what could practically function as a company handbook for the next Batman (“Please let it be Joseph Gordon Levitt,” I’ll be chanting to myself until Friday at midnight). In his own handwriting, Bruce expresses confusion at the mysterious origins of Bane, which actually served to do exactly what movie tie-in books should do; it got me super stoked to see the movie (as if I wasn’t already at Maximum Stokeage as it was). Readers of the book are offered answers to some very basic questions: how does this stuff work? Want to see the inside of the microwave emitter with which Ra’s Al-Ghul planned to vaporize Gotham’s water supply? Check his case file. Want to read up on Commissioner Gordon’s history with the Gotham police force? Open up his dossier. I really enjoyed poring over the detail and insights offered by The Dark Knight Manual, which will now have a permanent place on my coffee table. So will Batmobile, for that matter, because let’s be honest: an incomplete history of the Batmobile is still a history of the Batmobile. These are two sleek and sexy books that will make your houseguests jealous.