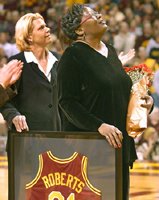 Gopher coach Pam Borton (L) watches with Linda Roberts as her jersey is retired at Williams Arena. Roberts is only the fourth Gopher women’s basketball player so honored.

“I guess he didn’t know I could,” laughed Roberts.

She could indeed. Roberts, now 46, starred on both the St. Paul Central girls’ basketball team (the team that, in 1976, won the first-ever state championship) and the Gophers women’s basketball team from 1977 to 1981. She set many records, some of which still stand today, and received many honors. But the most important one—having her jersey retired—remained elusive until January 15, when her jersey was hoisted to the rafters of Williams Arena and officially retired in a ceremony before the Gophers vs. Michigan State game.

Roberts is only the fourth woman Gopher basketball player, and the first African American woman, to have her jersey retired. Four Gopher men have also been honored.

A star close to home

That made the retiring of Roberts’ jersey “incredibly special,” said Regina Sullivan, the Gophers’ senior associate athletic director. “And not just for Linda but the department as well. Some [staff] didn’t realize how much of a star she was back in the day.” Sullivan characterized Roberts as “very modest—you wouldn’t know from talking to Linda that she was a great basketball star. It’s nice to see her getting this kind of attention.”

Jersey retired, but not number

It’s a common belief that when a player’s jersey is retired—hoisted to the rafters of Williams Arena for permanent display—that the player’s number is retired, too. Roberts found out that that’s not always the case. “You’d automatically assume that after the jersey being retired, there wouldn’t be anyone on the court with No. 21. But there’s a difference. Pam Borton told me that Lindsay Whalen was the last to have a [number] retired and will remain the last.” Along with Whalen (2004), Laura Coenen (1985) had both her jersey and number retired. Carol Ann Shudlick (1994), like Roberts, had only her jersey retired.

“It is athletic department policy to retire jerseys, not numbers,” said Sullivan. But she wouldn’t say unequivocally that it would never happen again: “Only in an exceptional circumstance would a number be retired.”

Although No. 21 will be on the court, at least the number is being kept in the family. Roberts’ cousin, forward Ashley Ellis-Milan, will wear it next season.

According to Sullivan, the process for having a jersey retired is simple: “A coach or anyone around the program can nominate a player. The athletics director and associate directors vote on what happens or doesn’t happen. Gopher women’s head coach Pam Borton nominated Linda.”

But why did it take so long? There are lots of theories, but no definitive answers about why Roberts had to wait 25 years for an honor that other athletes received quickly. “You know, I don’t know why it took so long,” said Roberts, “And I think that’s what the community wanted to know, and maybe that’s why it [finally] happened. Kwame McDonald and Charles Hallman [both writers for the Minneapolis Spokesman-Recorder] started talking about it years ago. They said, ‘looking back at her accomplishments, what she did for the U…maybe it’s time they retired her jersey.’”

Charles Hallman says that Kwame McDonald first started writing about five years ago about how Roberts deserved the honor; both men covered the story and personally lobbied athletic department staff. Hallman credits the recent popularity of women’s basketball at the University, and the leadership of athletic director Joel Maturi, hired three years ago, with finally getting Roberts recognized.

“Those who played before the team became popular were overlooked,” said Hallman. “Especially those who played in the days when women’s basketball wasn’t NCAA-sanctioned. But Linda was the leading scorer of her time. She set many records that still stand.”

“I covered Lindsay Whalen for four years. Linda has done just as much for the team as Lindsay,” Hallman commented, adding, “I think an underlying reason Linda waited so long is that, because she is African American, Linda was easier to overlook.”

Hallman and McDonald talked several times with the Gophers’ administration. “Joel [Maturi] said, months ago, ‘Yes, we should be looking at Linda…not just Linda but some others.’ I thought he was just placating us,” said Hallman. “But Joel really is looking at those in the past who should be recognized for what they did.”

“Twenty-five years is a long time. That’s bittersweet,” admitted Roberts. “But it is a great honor. I am so pleased that the University honored me. I really enjoyed the day. Deb Diamond in marketing made it a big to-do, made sure everything was perfect.”

Sullivan puts a positive spin on Roberts’ delayed honor. “The way I look at it, it’s a very small, elite group of people who get into that category at all. I look at it as ‘wow, what an incredible opportunity.’ Only four women in the history of the program have had their jerseys retired.”

With basketball, she opens minds and hearts

“My family, friends, the community,” Roberts said when asked what’s most important to her these days. “Giving back to the community is important to me.” One way she gives back is through her work with girls. With the help of former teammates Kathy Eiland-Madison and Crystal Flint-Holloman, Roberts runs a two-week summer basketball camp for inner city girls called Shooting Stars in the Summer. “This is our seventeenth year,” Roberts said of the camp. “We only charge $25, a lot of things are donated. Last year we had Katie Smith from the Lynx come and speak. The girls were just in awe.” Along with coaching from Roberts and company, there are guest speakers and giveaway items, and the girls, who range in age from 8 to 16, receive a certificate for participating.

On the family and friends front, Roberts was surrounded by 200 of her nearest and dearest, including her siblings, Pat, Sharon and Jimmy, coaches, high school teammates and eight college teammates. The eight teammates accompanied her out on the court when her jersey was retired. “They said that they didn’t want to take away from my day…but you know, I didn’t do this alone. I wouldn’t have been honored if it weren’t for them.”

One of those sitting in the family row was Roberts’ nephew Shaun, who has long since realized, Roberts said, that girls can indeed teach boys to play basketball.

“I had my family, my immediate family seated right in the front [including nephew Shaun, who’s now 26]. They stood and clapped at the right times.”

“But my nephew… he must have stood the whole time. He must have clapped from beginning to end.”

The profile appears in every issue of the Minnesota Women’s Press. It reflects our founding principle and guiding philosophy that every woman has a story. Readers are welcome to submit suggestions for profile subjects.


Linda Roberts’ records and honors
With the Gophers, Roberts ranks:

•Number one in free throws attempted

She has been named to: