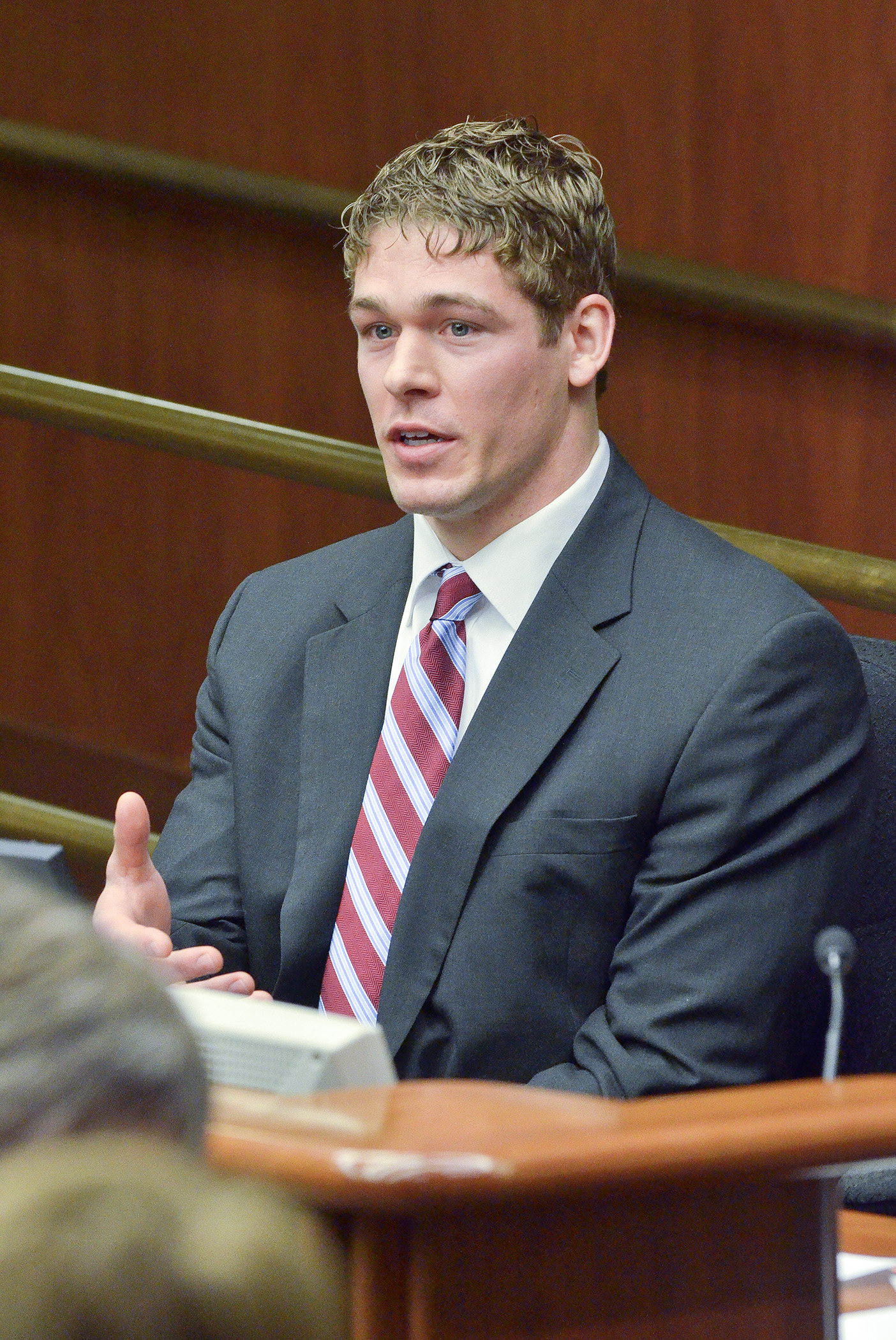 Minnesota Vikings tight end John Carlson testifies before the House Education Policy Committee Feb. 7 in support of a bill that would repeal a requirement for teachers to pass a basic skills examination as a condition for receiving a teaching license. (Photo by Andrew VonBank)

House lawmakers are revisiting a new, stricter teacher licensure law that critics say is driving qualified teachers out of the classroom.

Last year, the Legislature changed the laws governing teacher preparation programs, requiring teacher candidates to pass a basic test of their reading, writing, and math skills before getting an initial teaching license. Previously, the Board of Teaching could issue up to three temporary one-year licenses to new teachers who failed the exam, giving them more time to pass it.

The 2012 law came on the heels of a tougher basic skills test that was rolled out two years ago, compounding the concerns of its critics. But while some educators and lawmakers believe that the state’s licensure requirements are making it too hard for schools to hire and retain good teachers, proponents of the test say it helps ensure that teachers are held to a high standard.

Two bills considered in the House Education Policy Committee on Thursday illustrate the degree to which legislators differ about how the law should change. HF171, sponsored by Rep. John Ward (DFL-Baxter), would repeal the requirement that K-12 teachers pass a basic skills exam in order to get a teaching license. HF34, sponsored by Rep. Sondra Erickson (R-Princeton), would not only retain the exam but also require teacher candidates to pass it before they enroll in a teacher preparation program.

Fans of Erickson’s proposal include Susan Thomson, a parent who served on a teacher preparation task force assembled by the Board of Teaching. Teaching is a critical profession, and its entrance requirements should be challenging, Thomson said. Requiring a basic skills test before teacher preparation programs would also prevent candidates from going through the painful, expensive process of completing their coursework only to find that they’re unable to pass the exam and get a license, she said.

But teachers such as Dan Devine argue that the basic skills test isn’t a good measure of their skills. Devine, an art teacher with a temporary license at Pillager High School in central Minnesota, stands to lose his job if the current law is not changed, he told the committee. Devine has repeatedly taken and failed the writing portion of the test, he said, explaining that he has a learning disability. But the writing skills measured on the exam have no bearing on his ability to teach art, he argued. “I can motivate my students to do excellent work.”

His principal, Scott Doss, agreed, urging legislators to take action so that he can keep Devine in the classroom.

Two Augsburg College professors who also testified Thursday presented a study showing that minority teacher candidates fail the basic skills test at a higher rate. One of them, Christopher Smith, said he took the test himself and found numerous questions tainted by language or cultural bias.

The hearing also included testimony from local education leaders who said that the basic skills test makes it particularly hard for schools to employ teachers whose first language is not English, but who are well-qualified to teach in world-language or immersion programs. Several critics of the basic skills test also pointed out that Minnesota teachers must meet a number of other requirements in order to be licensed, including passing scores on pedagogy and content-area tests.

Both bills were laid over for possible inclusion in an education policy omnibus bill. Neither bill has a Senate companion.