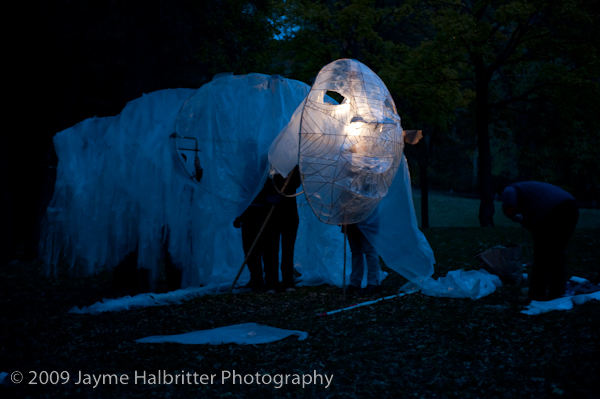 A 36-member orchestra, led by Jackie Becky played original scores for the e ntire evening’s production. “Devoured” is a collaborative musing on how and when we accept death in our lives. The musicians set the voice and mood, while the drama was played out with animal characters.  The show ended with brass band music and a lighting display projected along the banks of the Mississippi River.  Two more performances are scheduled for Hidden Falls Regional Park (north gate) on October 30 and 31 at 7 p.m.

“Barebones is not only a Halloween celebration and the spirituality of fall, but the recognition of people missed.” said Mark Safford, this year’s section designer.  “This year’s production is dedicated to Loren Kellen, a fellow contributor, who was generative and top of line creator for Barebones.”

“Our company all started in 1993 with Alison Helmstead, a University of Minnesota student in studio arts, wanting an art pageantry done for her thesis.” said Safford. Barebones Productions has done sections in parades, outdoor installments, and spectacle performances for the past 16 years.

“What’s magic is all this is word of mouth.  One person telling another about us.” said Safford.  The audience on October 24 was mostly adults with a few children attending.  Barebones has a growing following with audiences and some contributors coming in from different parts of the United States to be a part of the show.

What is most gigantic is the size of the commitment, talent and energy that goes into this performance by more than 200 people.  This production is supported by only one grant, from the Minnesota Regional Arts Council, and many volunteer hours. No tickets are needed.  Suggested donation is $5 to $20.  Come early for a pre-show about Julia Child and a headless chicken!