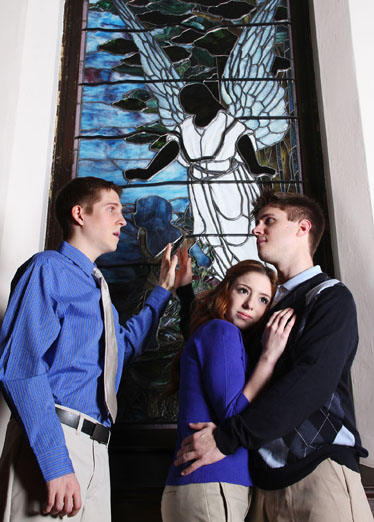 As my friend Shelby and I made our way to the Illusion Theater last Friday night to see Bare, she pointed out that the musical had many similarities to the Broadway hit Spring Awakening. I was familiar with both, having seen the latter multiple times (I reviewed the touring production for the Daily Planet) and because I’d received a CD sampler of songs from the former. Still, I had never connected the two, which in fact do share a few key themes, until right before the performance. Spring Awakening is the stronger of the two, but both have important stories to tell.

Bare: A Pop Opera opened Off-Broadway in 2004 and is currently having its area premiere thanks to Minneapolis Musical Theatre, in a production directed by Steven Meerdink. Set in a Catholic boarding school, the musical focuses on the secret love between Jason (Dan Lundin) and Peter (Derek Prestly). Jason is the school jock, but reluctantly joins the school’s production of Romeo and Juliet at Peter’s urging. However, he is not so easily swayed when Peter requests they make their love public. As a symptom of their strained relationship, Jason soon finds himself turning to the sultry Ivy for comfort.

The musical has a strong book, by Jon Hartmere and Damon Intrabartolo, but at times feels weighed down by the more than 30 songs packed into it (also written by Hartmere and Intrabartolo). The CD sampler I have contains the show’s best songs, including “A Quiet Night at Home” and “Warning,” while other songs feel like filler. A good trimming would have tightened the script and helped its punch to be more powerful. The set, designed by Joshua Stevens, does a good job conveying multiple venues, including a church, dorm rooms, and even a rave. The sound system was having issues last Friday night, with microphones not turned on early enough at times.

Director Steven Meerdink’s cast is full of young actors who have no trouble convincing the audience that they could realistically be high school students. However, at times some feel like they’re still auditioning for their roles rather than fully embracing them. Prestly is touching as Peter, the boy who is brave enough to reveal who he truly is, but longs not to do it alone. As his mother, Suzanne Reyburn turns in a wonderful performance, depicting a woman struggling to come to terms with the reality she’s known for some time. The two put in a heart-wrenching performance with “See Me,” as Peter attempts to say two simple words over the phone to his resistant mother. Also noteworthy is Alex Kotlarek as Jason’s overweight sister who consistently brings the laughs, but also deals with her own struggles.

Bare explores the ever-relevant themes of religion, sexual identity, and coming of age. The musical has a solid foundation, but certain pieces of this production don’t fall into place. Still, it’s a timely piece with a touching story.