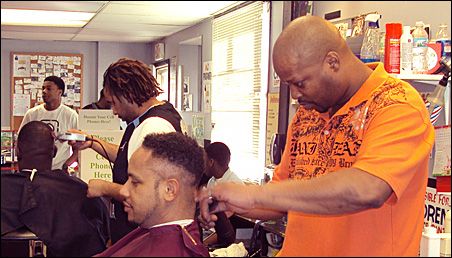 Michael Johnson, owner of Johnson's Barber and Beauty Shop, with a customer.

So, a guy walks into a barber shop…

Sounds like the setup for a joke. Instead, it’s a serious first step toward getting more African-American men to consider organ and tissue donation.

And that’s a worthy goal – given that more than 110,000 Americans, including 2,800 Minnesotans – are on the waiting list for a donated heart, lung, liver, kidney, pancreas or intestine. And there’s need, as well, for gifts of corneas, tissue, bone and skin.

So, why go to the shop with the red, white and blue-striped pole outside the door?

“Barbers are trusted messengers in their community,” as they have been for generations, and their places of business are community gathering places, explains Susan Mau Larson, public affairs director for LifeSource, www.DonateLifeMN.org a nonprofit focused on educating people about the need for organ donors.

Reticence in talking about it – much less considering organ or tissue donation – is common among men in general, Larson said. African-American men are even more skittish when it comes to that topic, and that group also tallies an increased risk for organ failure, she said. (Men, she admits, are 10 percent less likely to sign on for organ donation than women.)

Elevated health risks stem from the fact that African-American men as a group have high rates of diabetes, hypertension and obesity, conditions that could lead to organ failure. So, teaching better health practices, too, figured into the three-year initiative called Barbershop Conversations.

Led by LifeSource in partnership with the University of Minnesota and Q Health Services, the program officially ended Monday with release of an outcomes report and thanks to participants. Measures of success were mixed, but more on that later.

“Barbershop Conversations” enlisted 26 black barbers at 18 independent shops around the Twin Cities metro area and then provided them with a little Health 101: some basic health education about diabetes, hypertension, obesity, stress and nutrition, as well as about organ and tissue donation. The median age of the 346 men participating was 40.

So, how do you get from “How do you want it cut?” to “Have you considered donating your kidneys?”

You sneak in the side door, reveals Brian Davis, proprietor of Brian D’s Old School Barbers in North Minneapolis.

“We just start with regular conversation. I may start with, ‘How you been eatin’?’ or ‘Hey, I had a great lunch,’ ” said Davis, a likeably chatty fellow.

And then the guy starts saying, “I’m a little overweight,” and talks about diabetes in his family. That’s his cue, he said, to start talking about health, his 15 years of healthy eating and health risks for black men. “There’s a lot of stuff that runs in the black community, hypertension, diabetes,” he says.

Davis says his shop, like many run by African-Americans, with its couch for lounging, dominoes and cards for playing and music for listening, is a magnet for the adult males. Traditionally, the barber shop is “almost like a country club for African-American men,” he claims.

So it’s only natural that there’s a little male bonding and some dispensing of advice. Davis might suggest his clients “do not do so much drinking, eat a little more fruit, eat a little more vegetables. Take the dog around the block. Walk with the kids to the park. Maybe even ride a bike.”

So, how successful was this multi-year program, funded with a $300,000 federal Health and Human Services grant and supported by the Pan African Community Endowment of the St. Paul Foundation?

Enter scientist and outcomes researcher for the University of Minnesota Medical School David Radosevich, with a background in nursing and Ph.D. in epidemiology.

There was no increased percentage of men signing up to become organ donors.

That number remained about the same, at about 30.8 percent, which “in the overall scheme of things, it’s still pretty low,” Radosevich said. Yet, it is unknown how many participants may have been persuaded to sign up in future -say, the next time their driver’s license comes up for renewal or sign up online.

A good sign, he said, is that half of those participating discussed organ donation with family members, which they had not done previously.

The barbers were financially compensated for their participation according to a multi-level scale (detailed in box).

The study, which included having participants fill out health questionnaires, did not really look into whether clients intend to change health behaviors, Radosevich said, but reported these other findings:

Further, Radosevich said the study uncovered and corrected misinformation surrounding organ donation, namely that donor candidates receive substandard medical care because they have signed on to be donors and that churches do not support the concept. Disputing that, he said health care and donor care staffs are separate.

All major religious donations support organ donation, Larson says. In addition, donors and recipients do not have to be the same race to match, Larson says.

She sees the results as an important part of the effort to convey the need for organ and tissue donors and to measure attitudes about donation, which findings are reported to the federal government.

“A secondary and very important outcome from Barbershop Conversations was the increase in participants’ willingness to change lifestyle behaviors that can lead to organ failure,” she said.

Adds barber Davis, “They’ve gotten some information about how to live their lives a little better.”