In the shadow of the bustling light rail construction, University Avenue is home to shiny new storefronts, the neon lights of more commercial vendors, and a few neighborhood businesses, which are at the heart of the neighborhood’s character.

Pete Lebak’s one-man barbershop in Southeast Minneapolis is one of those businesses. After relocating to Minnesota back in the 60s, Lebak has slowly grown his business with the word of mouth recommendations given by his loyal clientele. In 1980, he told a former customer, Terry Conger, of his plan to move out to Prior Lake. Then, said Lebak, Conger insisted that the barbershop instead move into his own building, so that he wouldn’t have to make the drive to get his haircut. Lebak was reluctant at first, but moved into the shop, which was wall to wall construction equipment from the previous owner. Now, 31 years and four months later, Pete asserts that he feels the shop (now owned by Conger’s nephew Rick Bergman) is his home, who he is, and where he wants to stay.

“Pete has a good soul. He is a good neighbor,” says pharmacist Tom Gupta of next-door Schneider Drug. Both Gupta and one of Lebak’s customers also note that he is a dog lover. Lebak’s yellow lab Bug (short for ‘Emily’s First Ladybug #17’) reclines on the barbershop floor while his best friend attends to customers and friends, and even fishes dog treats out of his cupboards for visiting canines. 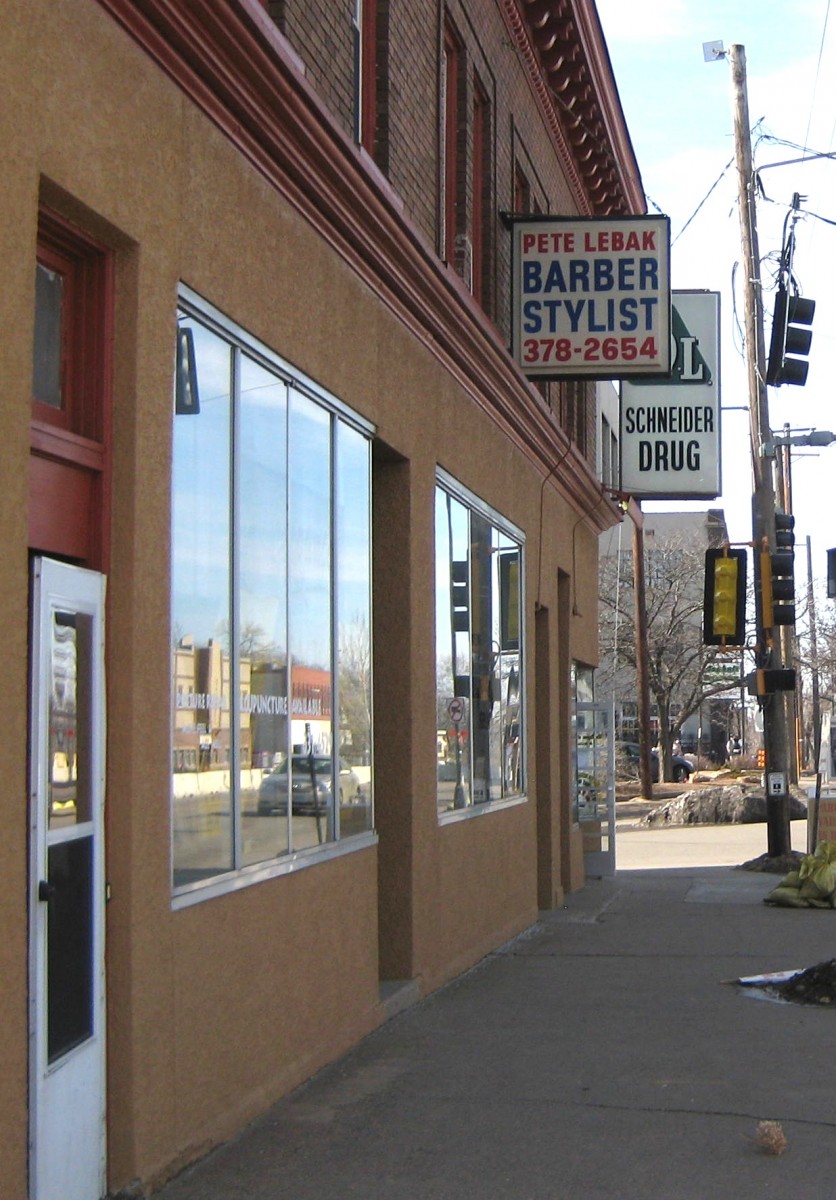 Lebak is “a storyteller,” adds Gupta. “He adds character to the neighborhood.” Lining the walls of the barbershop are produce stickers, hunting memorabilia, rows and rows of photographs, and humorous signs and sayings. A tongue-in-cheek special for the “Sparkling Mullet” hangs on one wall while antlered friends face the barber’s chair. Smiling and checking his work, Lebak recalls good times spent with his own barber, Bob, and tells of cutting each others’ hair while enjoying a cold drink. It is clear that he enjoys both storytelling and listening to his friends. It is a “rare conversation [with Lebak] that isn’t punctuated with laughter,” notes neighborhood resident and friend Terry Hokenson. Hokenson adds that he feels fortunate that Lebak is in the neighborhood so he is able to stop by just for a chat or for some wisdom from the barber and sportsman.

While sharing his love of the neighborhood and of the friends he has made in this business, Lebak adds that he doesn’t stay here just to make a living, but for the love of the shop and the life he has built. He laughs that he has had “every job there is,” including truck driving, construction, the army, and the oil fields of South America. An avid hobbyist, he offers tips for bow-hunting and adds that he writes short stories about his childhood in Wyoming. His knowledge of the neighborhood and many interests give him the special something a successful stylist or barber needs: the art of conversation and storytelling. A composition notebook filled almost to the end with happy customers and addresses sits on the counter, and Lebak proudly describes his daily life filled with friendly exchanges and individual styles. As a customer smiles after his haircut has been completed, he notes to Lebak that he hadn’t even bothered asking for what he wanted.

Lebak counts walk-ins, appointments, local news celebrities, and even the reported “oddball” or two among his clients.

While the Central Corridor light rail may increase street traffic in the future, its construction currently limits the availability of parking and accessibility to the shop. Although parking is available on Bedford and Emerald streets, and Lebak has a few spots behind the shop for parking, there is no doubt that his shop is among the many businesses negatively impacted by the construction. In the face of this obstacle, Lebak remains determined to try to stay. Residents are rallying around the neighborhood fixture in hopes to bring in business. Hokenson sums up Lebak’s presence as “the kind of neighborhood institution that helps keep a neighborhood knit together.”