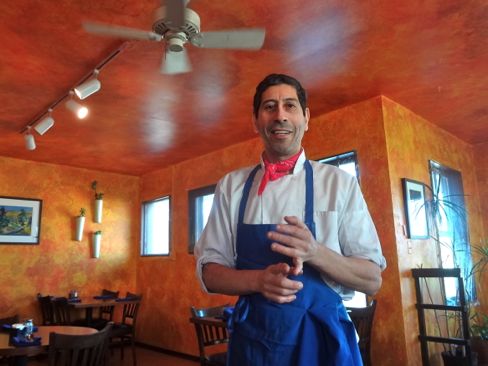 I have never quite understood why the cuisine of the Maghreb — that is, north Africa west of Egypt — isn’t more popular in the United States. It’s really a Mediterranean cuisine, closely related in style to Italian and Spanish and Turkish and Middle Eastern, with many of the same ingredients: tomatoes and peppers and olives and capers, fresh seafood, dates and flaky pastries.

In France, it’s one of the most popular ethnic cuisines — Moroccan and Algerian restaurants and cafes advertising couscous and tajines are a common sight. In fact, thanks to Google, I just learned that couscous was recently found to be the third-most-popular dish in France. Couscous is steamed semolina (cracked wheat) topped with a meat or vegetable stew; tajines are stews, traditionally cooked in a special clay pot with a conical lid; typical tajines combine lamb or chicken with olives or a variety of fruits and spices.

But in the Twin Cities, it’s almost unknown. Saffron, in the Minneapolis warehouse district, does offer four tajines on its menu: one with lamb shank with quince cooked in fall spices with white beans, sesame seeds and preserved lemon ($25), and another, which I enjoyed recently, made with duck meatballs in a sweet and spicy tomato sauce ($19/$27).

In all of Minnesota, the only restaurant dedicated to this great cuisine is the Barbary Fig on Grand Avenue  in St. Paul. I’ve been a fan of the Barbary Fig for decades, but somehow, it had fallen off my radar — it had been years since my last visit. But I happened to stop by for lunch, and was delighted to find that it was as good as ever.

The same chef-owner, Brahim Hadj-Moussa, affectionately known as Hadj, was still in the kitchen, and little else seemed to have changed. Even the prices seemed to have changed very little — Barbary Fig is one of the few restaurants I can think of in the Twin Cities that offer wine and beer, an intimate bistro ambience, and most dinner entrees under $12. 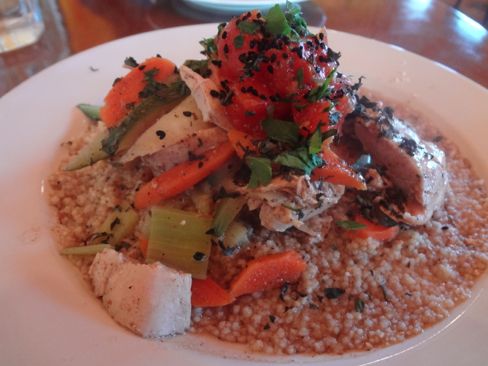 Highlights of the lunchtime visit included a plate of couscous topped with a stew of boneless chicken, carrots and leeks with a tomato and toasted sesame seed chutney; and my companion’s open-faced lamb and bleu cheese sandwich with roasted red peppers and artichoke hearts, served over a toasted brioche. Both dishes had a delicious lightness and freshness about them. 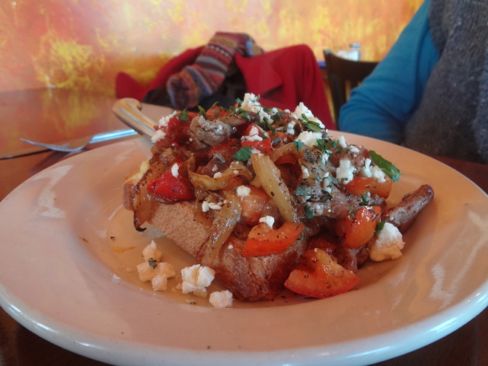 On a return visit, the dinner menu offered nightly specials ($14.25) that ranged from lamb shank and rabbit to seafood. We started with the brik, an appetizer of tuna wrapped in filo pastry, a popular street food in Algeria; and a salad of mixed greens, tossed with goat cheese, artichoke puree, olives and chopped walnuts. These were pleasant, though I don’t recall finding any of the grilled eggplant that was listed as one of the salad ingredients. Later, Hadj mentioned that with advance notice, he can make a more traditional version of the brik, filled with chopped egg and other ingredients. 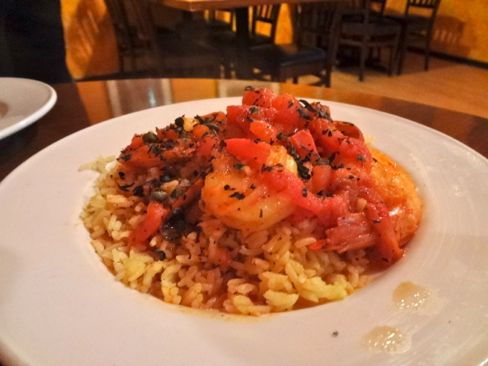 For our entrees, we chose a nightly special of shrimp in sauce of tomatoes, garlic and capers, served over rice ($14.25), and a vegetarian entree of fava beans, rice, carrots and cabbage topped with an apricot chutney. Both were good enough to be enjoyable, but the next time I visit, I’ll probably try something different, like the couscous with merguez sausage, yams, caramelized onions and currants ($11.95), or another of the ever-changing nightly specials.

I’d also like to return for the Sunday brunch, which ranges from crepes with caramelized pears and chocolate ($7) to eggs scrambled with merguez sausage, caramelized onions and fresh tomato ($8).