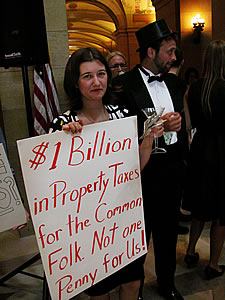 Demonstrators dressed as millionaires took part in Thursday's rally at the state Capitol.﻿

It’s said the sign of a good compromise is that it leaves no one happy. So who was celebrating at the Minnesota Capitol one day after Republican legislators and DFL Gov. Mark Dayton finalized a budget compromise to end the longest government shutdown in state history?The CEOs of big banks – or, more accurately, a handful of progressive activists impersonating the CEOs of big banks.

Mixing street theater and scripture, about 75 members of Minnesotans for a Fair Economy, a coalition of community, labor and faith groups, staged a media event at the Capitol Thursday to highlight the winners and losers in the state’s new $35 billion biennial budget.

Big banks, speakers said, are winners in the budget compromise, as they stand to increase their already-obscene profits, thanks to a provision in the deal that will delay payment of $700 million in aid to the state’s public schools until next year.

While they wait for the delayed state-aid payment, many school districts and charter schools will have to borrow money – and pay interest – in order to cover their day-to-day expenses.

Said Mary Cathryn Ricker, president of the St. Paul Federation of Teachers: “The GOP’s budget solution is a banker’s dream.”

Flanked by activists dressed in tuxedos and furs, Ricker pointed out that banks, which reported $30 billion in profits during the first quarter of this year, hardly need another taxpayer bailout.

“They are on the verge of earning a lot more from Minnesota taxpayers,” Ricker said. “This so-called school shift does nothing more than siphon school district resources out of our classrooms and into bank profits.”

Valerie Rolstad, a special education paraprofessional in the Columbia Heights schools, has seen the effects similar state-aid accounting maneuvers have had on her school district in the past – and they’re not good.

“Do school districts cut teachers, support staff or programs?” asked Rolstad, a member of Service Employees International Union Local 284. “Or do they have to go out for a levy that the taxpayers have to pay for?” 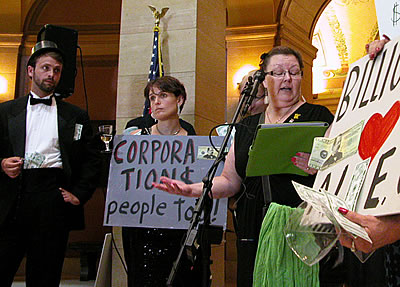 Valerie Rolstad, a special education paraprofessional in the Columbia Heights schools and member of SEIU Local 284, spoke at the rally. (Photo by Michael Moore)﻿

The Rev. Grant Stevensen, pastor at St. Matthew’s Spirit of Truth church in St. Paul, shamed state lawmakers for straying from their “social contract” to protect the most vulnerable people in society, like children, the elderly and the sick. The budget compromise will eliminate health care coverage for 8,000 Minnesota families, he said.

Instead of living up to those responsibilities, Republican lawmakers refused to consider raising taxes on the wealthiest Minnesotans. Dayton pressed for a tax increase on the richest 2 percent that would have spared school districts from having to borrow to cover the $700 million in delayed state-aid payments.

Not above a little irony, Stevensen opened his address with a “well-known” passage of the Bible, in which Jesus says, “Let the little children come to me because I need $700 million from them.”

But there’s nothing funny, Stevensen said, about the course laid out in the new biennial budget.