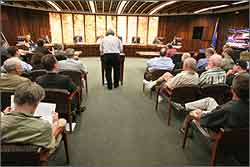 Tuesday’s public hearing on the proposed Hennepin County sales tax that would fund a new Minnesota Twins stadium was supposed to be a somber–albeit cynical–affair, as critics of the plan acknowledged that stadium supporters on the County Board held a solid 4-3 edge and no amount of testimony was going to sway the vote. But opponents, including a gubernatorial candidate who had to be physically removed from the board room, continued to make clear their disgust with the board for its support of the measure.

About 75 people attended the hearing, including a number of political candidates, and the commissioners hunkered down as they heard a litany of familiar reasons why the proposed tax was a bad idea, along with a similar number of ballpark supporters who waxed poetic about the glories of a new downtown ballpark.

Opponents, such as Green Party activist Dave Bicking, called for a binding referendum on the sales tax and pleaded with the board to “listen to the people.” Local economist Kenneth Zapp called the deal, “the largest transfer of wealth from taxpayers to a private individual in the history of the county” and told commissioners that taxpayers would be better off paying for the entire $348 million facility and securing the revenue from the naming rights and concessions. And Farheen Hakeem, who is challenging Commissioner Peter McLaughlin, a stadium proponent, told the board that she’s doorknocked half of her district and found only one person who supports the stadium tax. Addressing McLaughlin directly, she said, “You’re not representing your district.”

Twins president Jerry Bell thanked the board for its support and suggested that the new stadium would “assure the future of the Minnesota Twins in this city.” He added that he’s received more than a thousand e-mails since the legislature voted to allow Hennepin County to institute the sales tax. “People are more concerned about design and when it will be open than anything else,” he said.

Local business leaders, including Deb Hopp of the Minneapolis Downtown Council and John Stanoch of the Minneapolis Regional Chamber of Commerce, touted the economic benefits of the new stadium. “It’s an issue that unites the business community, not only here, but throughout the region,” he said.

Board chair Randy Johnson earlier had told the crowd that he would be alternating the witnesses between opponents and supporters, a strategy that apparently delayed the testimony of community activist and gubernatorial candidate Leslie Davis, who at one point less than an hour into the hearing strode to the podium and demanded to be heard.

Johnson replied that he would get his opportunity to speak, but Davis held firm. “Is this a democracy or a hypocracy?” he cried.

A shouting match ensued, as Johnson attempted unsuccessfully to convince Davis to yield to the next speaker, and two security guards arrived to escort the now-ranting Davis out of the room. “I’m running for governor of Minnesota,” he managed to blurt before the guards began to force him from the podium. Davis collapsed to the floor, a third security guard arrived, and they dragged the protesting candidate toward the exit.

“You’re up to your old, despicable ways,” Davis yelled.

Outside the hearing room, anti-stadium activists stood and demanded Davis be heard. “Let him talk!” they chanted. But the hearing quickly resumed, while Davis was handcuffed and departed with security guards in an elevator.

Commissioners have scheduled two more public hearings before they vote on the sales tax, Wednesday in Bloomington and Thursday in Maple Grove. For information, visit http://www.co.hennepin.mn.us/.